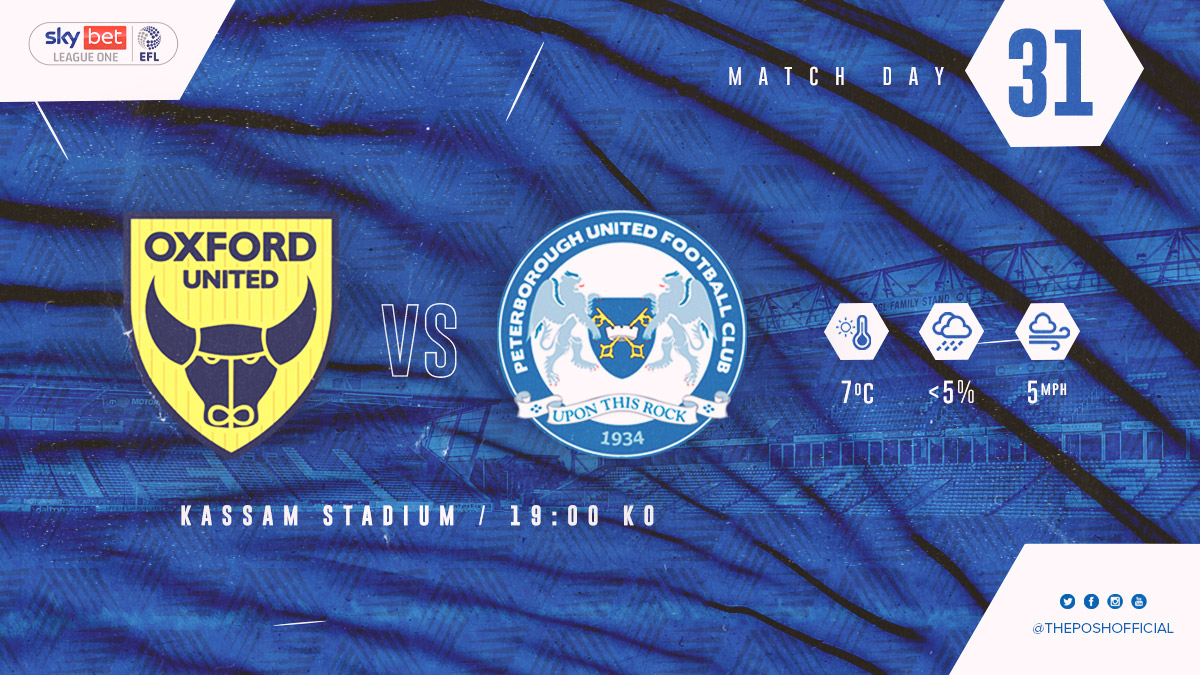 Posh head to the Kassam Stadium to face Oxford United on Tuesday evening.

Peterborough United are back in Sky Bet League One action on Tuesday night with a trip to face Karl Robinson’s Oxford United (7pm) as Darren Ferguson’s men look to make it seven victories in a row and preserve their lead at the top of the table.

Oxford have charged up the league table of late and find themselves very much in the promotion picture despite having to settle for a point at the weekend against Milton Keynes Dons. They reached the play-offs last term and made some eye-catching signings during the January transfer window.

Posh are without the services of teenage defender Ronnie Edwards due to a muscular problem, but he is making good progress and on track for a return before the end of the campaign. Louis Reed and Frazer Blake-Tracy were both excellent in a friendly victory over Ipswich Town on Friday and pushing for a return to the match day squad.

Oxford have back to back home fixtures this week with Charlton Athletic visiting the Kassam Stadium on Saturday. Karl Robinson is unlikely to tinker too much with his starting line-up but they may have an issue with striker Sam Winnall who was substituted seven minutes after coming on at the weekend.

“Oxford are a good team, they have a lot of good attacking players, particularly in wide areas and they have been in excellent form over a long period of time. I have said to the group this morning (Monday) that everybody will be needed. Louis Reed and Frazer Blake-Tracy were excellent in a game against Ipswich on Friday and that is what we need, people pushing for places. We are not looking any further forward than Tuesday night, there is a long way to go,” Darren Ferguson said.

“When we have our players fit we’re a very good team. Now our squad’s going to be challenged and we feel it’s good enough to do that. We need to make sure we’re capable of winning more games than we have over the last few weeks,” Oxford boss Karl Robinson said.

You can purchase a match pass for £10 for iFollow here: