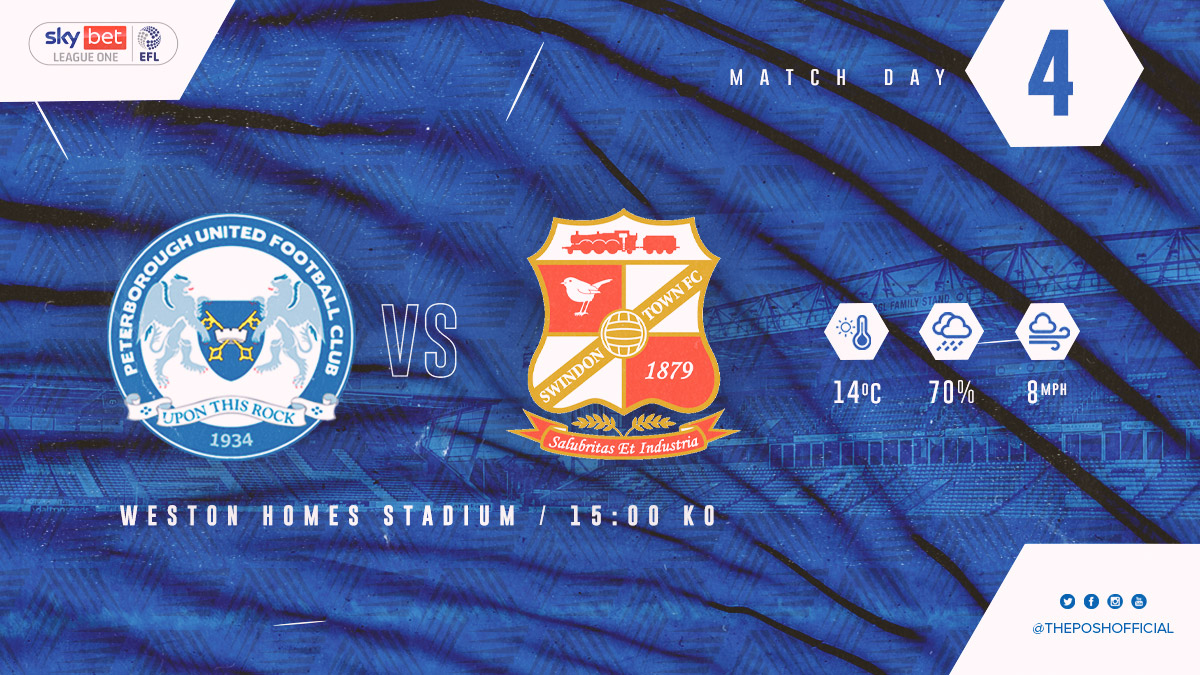 Peterborough United entertain League One newcomers Swindon Town at the Weston Homes Stadium on Saturday with the Robins looking to build on a promising start to life in Sky Bet League One following promotion last term.

Darren Ferguson’s men will be looking to take the positives out of the performance at the Stadium of Light against Sunderland last Saturday with a penalty from Grant Leadbitter condemning the club to a rather unfortunate 1-0 defeat.

Posh are sweating on the fitness of teenage front man Ricky-Jade Jones who has picked up a knock similar to the one that caused him issues last term. Frazer Blake-Tracy came through 90 minutes in a reserve team friendly with Gillingham on Tuesday and is in contention, but Idris Kanu is not thought to be considered as he still needs a 90 minute fixture under his belt after 14 days of self-isolation.

Swindon were 4-2 winners over Burton Albion last time out and it is unlikely they will make wholesale changes to their starting line-up with experienced front man Brett Pitman expected to lead the line.

FOOT IN BOTH CAMPS

Midfielder Anthony Grant helped Swindon to promotion last term and extended his stay at the County Ground in the summer. Grant made 59 appearances for Posh during his time at the club. Grant scored his first goal in three years in the 3-1 victory over Rochdale in September.

“Swindon are a very expansive side and of the teams I have watched so far this season, they have been the most impressive. They play good football, have recruited well and I think it will be a good game on Saturday. We will certainly have to play well to get the result that we want,” Darren Ferguson said.

Season ticket holders were emailed a code for this weekend’s game earlier this week. If you are a season ticket holder and have not yet received a code, please email ifollow@theposh.com. Match passes are available priced at £10 and can be purchased here https://www.theposh.com/matches/fixtures/first-team/202021/october/peterborough-united-vs-swindon-town-on-03-oct-20/