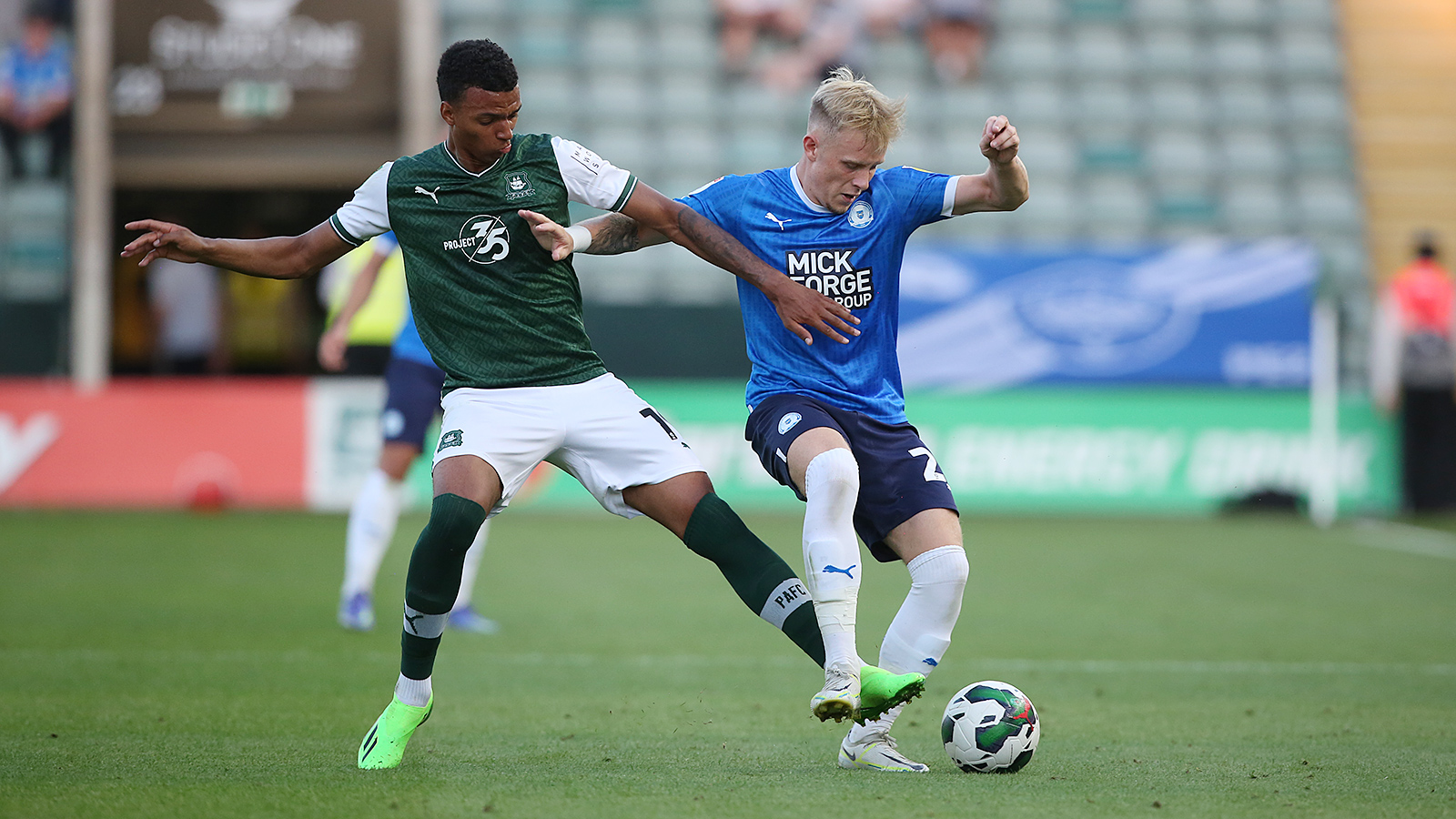 A young Posh side recorded a 2-0 win over Plymouth Argyle to move into round two of the Carabao Cup.

Peterborough United set up a tie with Steve Evans’ Stevenage in the second round of the Carabao Cup after a 2-0 victory over Plymouth Argyle at Home Park with Ricky-Jade Jones and Joe Taylor on target, the latter netting his first senior goal in stoppage time after keeper Michael Cooper had gone walkabout.

Joe Tomlinson headed wide of the target from a David Ajiboye cross just after the quarter hour mark before Lucas Bergström, was well placed to keep out Luke Jephcott’s low effort. Ajiboye flashed a cross-shot towards goal on 23 minutes with keeper Cooper pushing it aside to safety.

Both sides took the opportunity to get fluids on board on 25 minutes as the referee called a drinks break with temperatures in the South West nudging 28 degrees. Posh opened the scoring moments after the re-start as Fuchs won a 50-50 challenge, Randall advanced and slipped in Ricky-Jade JONES, who made no mistake, firing low into the corner with his left-foot.

Morgan Whittaker fired wide with his left-foot on 34 minutes after the on-loan Swansea man was allowed to cut into a dangerous position. Taylor fired wide on the break for Posh, although the youngster’s effort came from a very tight angle.

Argyle made a change at the interval with Adam Randell replacing Matt Butcher in the hosts midfield. Bergström produced a wonderful save within 60 seconds of the re-start, somehow clawing away a header from Ennis from point-blank range, a truly stunning stop from the on-loan Chelsea goalkeeper.

Wilson was cautioned by referee Alan Young for a foul on Jones on 49 minutes as he looked to break at pace down the left. Taylor was a whisker away from a glorious goal on his full debut on 54 minutes, but his acrobatic volley whistled just wide of the upright.

Finn Azaz replaced Luke Jephcott just before the hour mark as Plymouth made their second change of the contest. Azaz went close on the hour mark, but his rasping drive from 25-yards cleared the crossbar.

Azaz saw another effort repelled by Bergström moments later as the hosts enjoyed their best spell in the cup-tie. Grant McCann made a double change on 67 minutes with Jack Taylor and Joe Ward replacing Kyprianou and Ajiboye.

First team regulars Danny Mayor and Ryan Hardie were soon introduced by the hosts as the game entered the final 20 minutes. Mayor fired over after wriggling into space on the right hand side as the Pilgrims continued to press for the leveller.

Chances were coming freely for the hosts now with Whittaker blazing over from 12-yards after Knight could only half-clear Mayor’s cross. Posh carved out a great chance on the break as Taylor fed Jones, but keeper Cooper made himself big and smothered the effort.

Posh made a double change on 75 minutes as Ben Thompson and Gabe Overton were introduced, the latter for his first appearance in the senior side. Josh Knight appealed in vain for a penalty moments later, but the referee waved away the protests.

Thompson and O’Connell both produced superb last ditch tackles in the last 10 minutes, while Joe Taylor’s first touch let him down as he anticipated a poor defensive pass. Whittaker was denied by Bergström on 87 minutes after the midfielder showed a good first touch and shot on the turn.

Knight was cautioned by referee Alan Young despite winning the ball and from the resulting free-kick, Hardie won the header but couldn’t keep it down. Posh doubled the lead in stoppage time, Plymouth had a corner but it was cleared and Joe TAYLOR was able to gallop clear and finish into an empty net with his left-foot for his first senior goal.