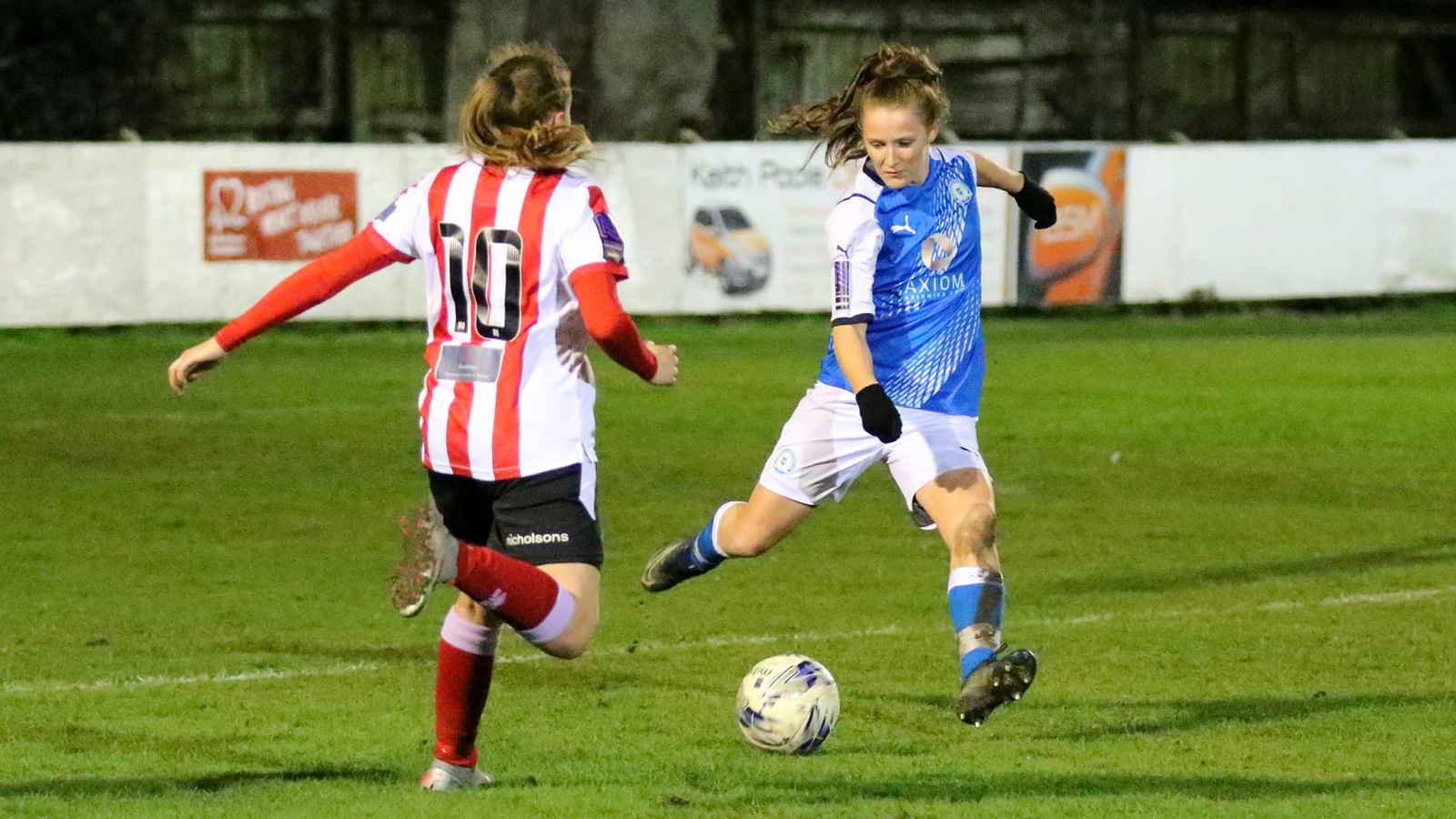 Spirited Posh Women edged out in a close encounter against Lincoln City Women on Thursday evening.

Peterborough United Women were narrowly beaten 2-1 by title hopefuls Lincoln City in the FA Women’s National Division One Midlands on Thursday evening despite a spirited performance throughout the 90 minutes at the Moorland Sports Ground.

At a cold and windy Moorland Sports Ground, Posh couldn’t have asked for a better start against The Imps when Megan Parrett opened the scoring on three minutes. Cassie Steward raced through after Keir Perkins long-ball over the top, Steward tried to loft the keeper which smashed against the crossbar, the ball fell to Parrett who beat her defender and found the bottom corner.

Goalkeeper Amy Butler was penalised for picking up a back-pass, but Lincoln City failed to take advantage of the in-direct free-kick. Leah Hardy created some space just outside the box, her long-range effort sailed well over the bar.

A free-kick from the left-hand side was punched away by Butler, only to a Lincoln City on the edge of the box but her effort was wide of the target. The hosts found the equaliser on 39 minutes when Chantelle Robinson latched onto a diagonal ball across the pitch and slotted the ball into the bottom left corner.

Leah Hardy was inches away from handing Lincoln City the lead just after the break when her long-range effort rattled the crossbar. Butler got down superbly to keep out Robinson after she latched onto a low cross into the box.

On 58 minutes, Perkins broke through on-goal but the opposition keeper was out quickly to stop her in her tracks, while minutes later, Steward saw her goal-bound effort blocked by the defender after rounding the keeper.

Lincoln City’s keeper then pulled off a magnificent save as she pushed Hannah Hipwell’s thunderous effort onto the crossbar. Dan Lawlor made his first change of the evening on 65 minutes as Beatriz Borque replaced Megan Parrett.

Lincoln City took the lead on 69 minutes when Jessica Rousseau was at hand on the back post to tap home a low cross to give the hosts the advantage in the final 20 minutes. Jess Driscoll was penalised for a foul and was the player to go into the referee’s book and the hosts should have extended their advantage from that free-kick, as the ball rebounded to Toni McHamilton who somehow put it wide from six yards out.

Borque close-range effort forced the hosts ‘keeper to get down low before Steward quick snapshot inside the box failed to cause any trouble for the Lincoln City keeper. Posh kept pushing for the equaliser in the final few minutes of the game, but Lincoln City managed to hold off the extensive pressure to keep their title hopes alive.