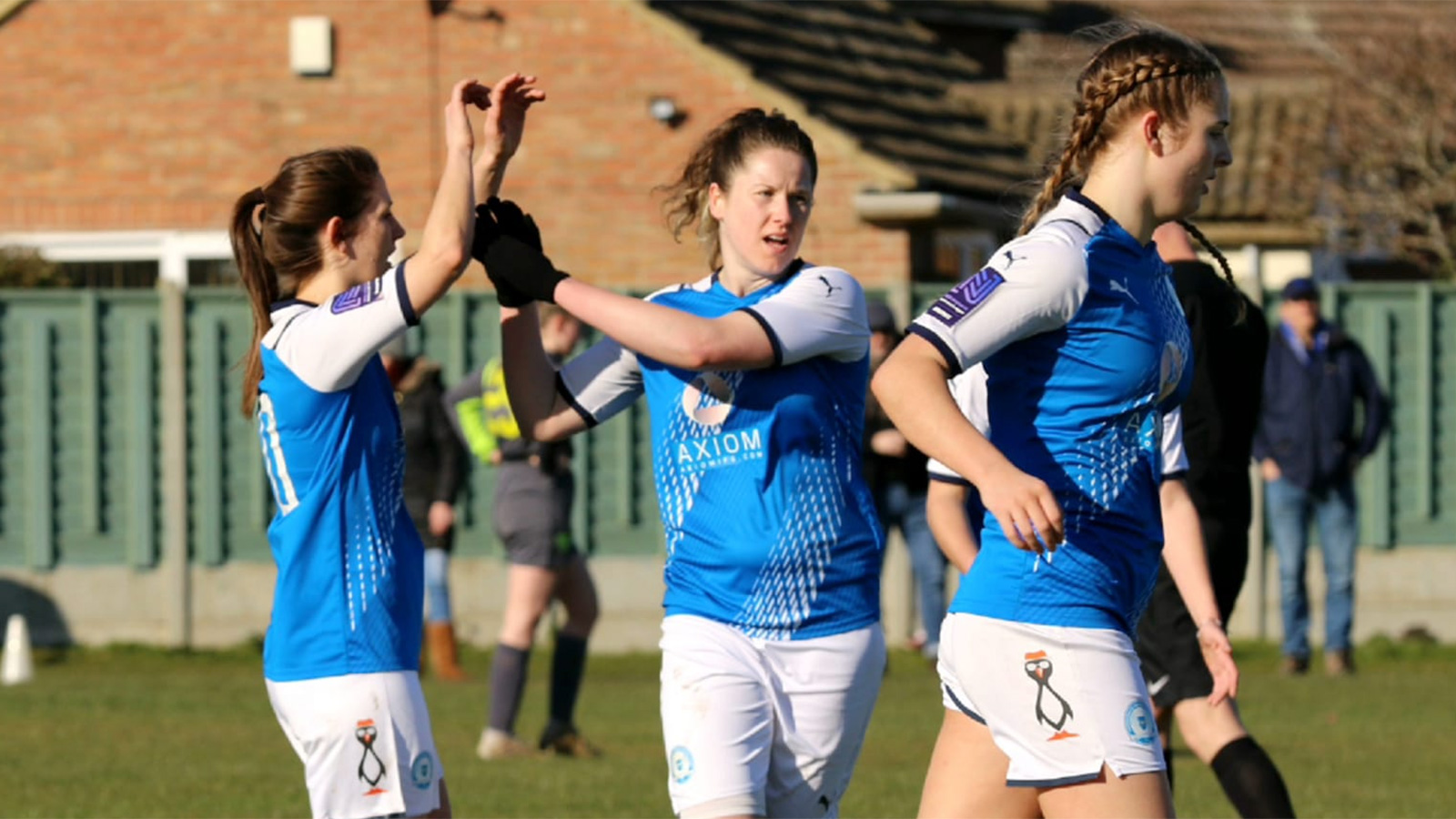 Dan Lawlor’s side progressed to the final of the Northants County Cup for a second season running.

Reigning Northants County Cup winners Peterborough United Women sealed their place in the final for a second consecutive season after an emphatic 11-1 victory over AFC Rushden & Diamonds Women Whites in the Semi-Final on Sunday afternoon.

Despite the number of changes among the starting eleven, Posh were quick out of the traps as Megan Parrett cross was dropped by the keeper, but one of hosts defender was the quickest to reach to the loose ball. Ellen Marson was inches away from connecting to Kayleigh Aylmer cross after a quick short corner found the defender in acres of space.

Katie Lowder had an effort on the edge of the box pushed away from the keeper after a clever interchange with Parrett before Marson saw her curling effort fall wide of the far post. On 18 minutes, Aylmer burst through on-goal after a lovely cross-field pass by Lowder, but the defender effort was comfortably saved by the keeper.

The deadlock was broken on 20 minutes when Aylmer cross was dropped by the hosts keeper and Hannah Hipwell was there to tap home from close-range. It was roles reverse shortly after when Aylmer long-ball over the top played in Lowder, the keeper got down well to push her effort around the post.

AFC Rushden & Diamonds equaliser on 26 minutes as a loose ball in the air was caught by the wind, their forward took it down and slotted the ball past Sophie Powell. Posh quickly reinstated their lead just two minutes later when Jess Driscoll played through Parrett, who cut inside, beating her defender, and found the bottom corner.

The hosts keeper was called into action once again, making two quickfire saves from Marson and Hipwell. Just after the half an hour mark, Posh grabbed their third of the afternoon as some lovely build-up play found Hipwell free inside the box and she calmly slotted the ball away for the second of her match. Defender Niamh Connor extended the advantage five minutes later as Aylmer corner was headed on by Parrett to find Connor at the back-post to poke home.

The hosts number 9 managed to beat the Posh back-line, but her left-footed effort dragged wide of the far post. Aymler then saw her thunderous stroke from the edge of the box recohered of the post.

Jess Driscoll made it four for Posh on the stroke of half-time, playing a one-two wit Marson and she laid it back to Driscoll, who found the bottom corner from the edge of the box. Posh started when they left off in the first-half when Lowder grabbed the sixth goal of the game straight from kick-off.

Connor burst down the left-hand side and her low cross looked like a routine save by the keeper, but the ball fell out of her hands and Lowder was there to tap home. On 53 minutes, Lowder added to her tally and made it seven for Posh as she curled a free-kick on the edge of the box into the top corner.

Aylmer, after failing to convert a few chances earlier in the game, finally added her name to the scoresheet and netted her first goal for the club when a collision with Keir Perkins and the keeper saw the ball spill out to Aylmer, who curled home into the empty net.

Hipwell then netted a hat-trick on 60 minutes when her long-range effort was fumbled by the keeper, who was fighting for vision against the sun. Two minutes later, Posh grabbed their tenth goal of the game as Steward corner was turned home by one of the Diamonds defenders.

On 64 minutes, defender Natalie Hurst opened her account for the club as Steward corner was headed on by Connor, then Marson before Hurst converted at the back-post. Perkins, who entered the pitch in the early stages of the second-half, saw a shot from a tight angle fall over the bar after Marson set the forward through.

Parrett was the next player to leave a mark on the woodwork when her 30-yard free-kick smashed against the crossbar. Connor also rattled the crossbar with a header minutes before the final-whistle.