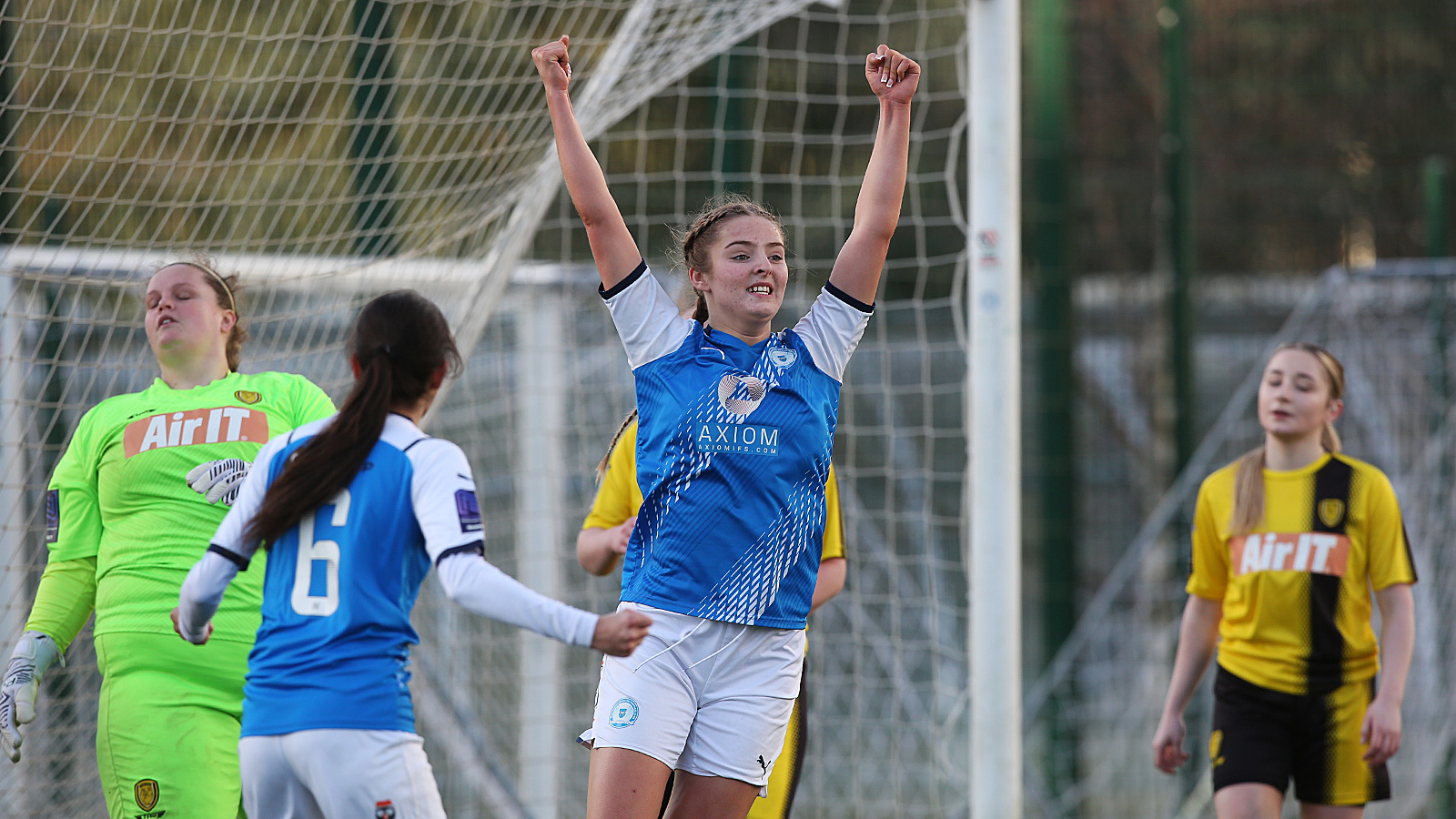 The Posh Women made it three wins in three in the FA Women’s National League.

Beatriz Borque’s stunning strike sealed the victory for Peterborough United Women as they made it three wins on the bounce in the FA Women’s National League Division One Midlands after a hard-fought 3-2 victory over Burton Albion at the idverde training ground.

The visitors opened the scoring with a thunderous strike from about 30 yards out, but two goals in a matter of minutes from Niamh Connor and Jess Driscoll put the Posh ahead at the break. Borque curling effort in the second half gave Dan Lawlor’s side an important two-goal advantage, and despite a late strike from Beth Naqwi in the closing minutes, Posh managed to hang onto the victory.

It was a nightmare start for Posh, after winning their last two games in the league, they found themselves behind within the opening stages as Ella Ritchie guided her long-range effort over Amy Butler and into the back of the net to hand the visitors the lead.

Cassie Steward’s cross was glanced over by Megan Parrett after great work by Steward on the right-hand side to deliver the ball into the box. Hannah Hipwell produced Posh first shot on target on 20 minutes as her long-range effort was palmed away by the visitor’s keeper.

Posh failed to deal with a bouncing ball after a long field punt forward by The Brewers defence, Hajrah Mahmood tried to latch onto the ball, but Butler was out quickly to smother the ball. Ritchie then saw a shot on the half-volley glance past the far post as the visitors looked to double their lead.

However, the next goal came at the other end, as Parrett’s corner fell to Borque at the back-post, she nodded it back across goal for Connor to loop her header over the keeper from six yards out.

Then, within four minutes, Posh took the lead and once again it was Driscoll to grab her sixth goal in five games. Parrett’s free-kick from the right-hand side was deep but the midfielder was on hand at the back-post to sneak her header in at the near-post.

The visitors had a glorious opportunity on the stroke of half-time to bring the scores level when Ritchie broke through on-goal, one-on-one with Butler, but the striker sent the ball wide of the target. Steward attempted an acrobatic effort in the box, however, it floated over the crossbar as the referee brought the half to an end.

It was a quick start from Posh after the break as Borque rattled the crossbar before Steward saw her shot on the turn blocked by the defender. The Brewers keeper was called into action once again as she pushed away Hipwell effort from inside the box.

On 70 minutes, Cresswell threaten to get behind the Posh back-line but a superb recovery tackle from defender Elloise Copson prevented the full-back getting through. Minutes later, Posh extended their advantage and it was a glorious finish by Borque. Perkins was brought down inside the box but manages to flick the ball back to Borque, she picked out the far corner with a curling effort on her weak foot.

Connor looked to add to her tally in the game as her long-range shot was whiskers away from the far post after a brilliant run out of defence. The Brewers keeper was certainly busy of the two as she managed to keep out Steward effort, however, only to the feet of Perkins, who couldn’t sort her feet out in time before she was pipped in possession.

As the game entered the final five minutes, the visitors cut the deficit when a short free-kick was played to Naqwi on the edge of the box and she lashed her strike past Butler to give The Brewers belief in the closing stage. It could have been a nightmare few minutes for Posh, as straight from kick-off they gifted possession to Ritchie, who raced on-goal, fortunately, sending her effort off target.

The visitors pushed for the equaliser in injury time, but Posh managed to hold off the oncoming pressure to secure their third win on the bounce in the FA Women’s National League.

Subs Not Used: Powell and Stevenson