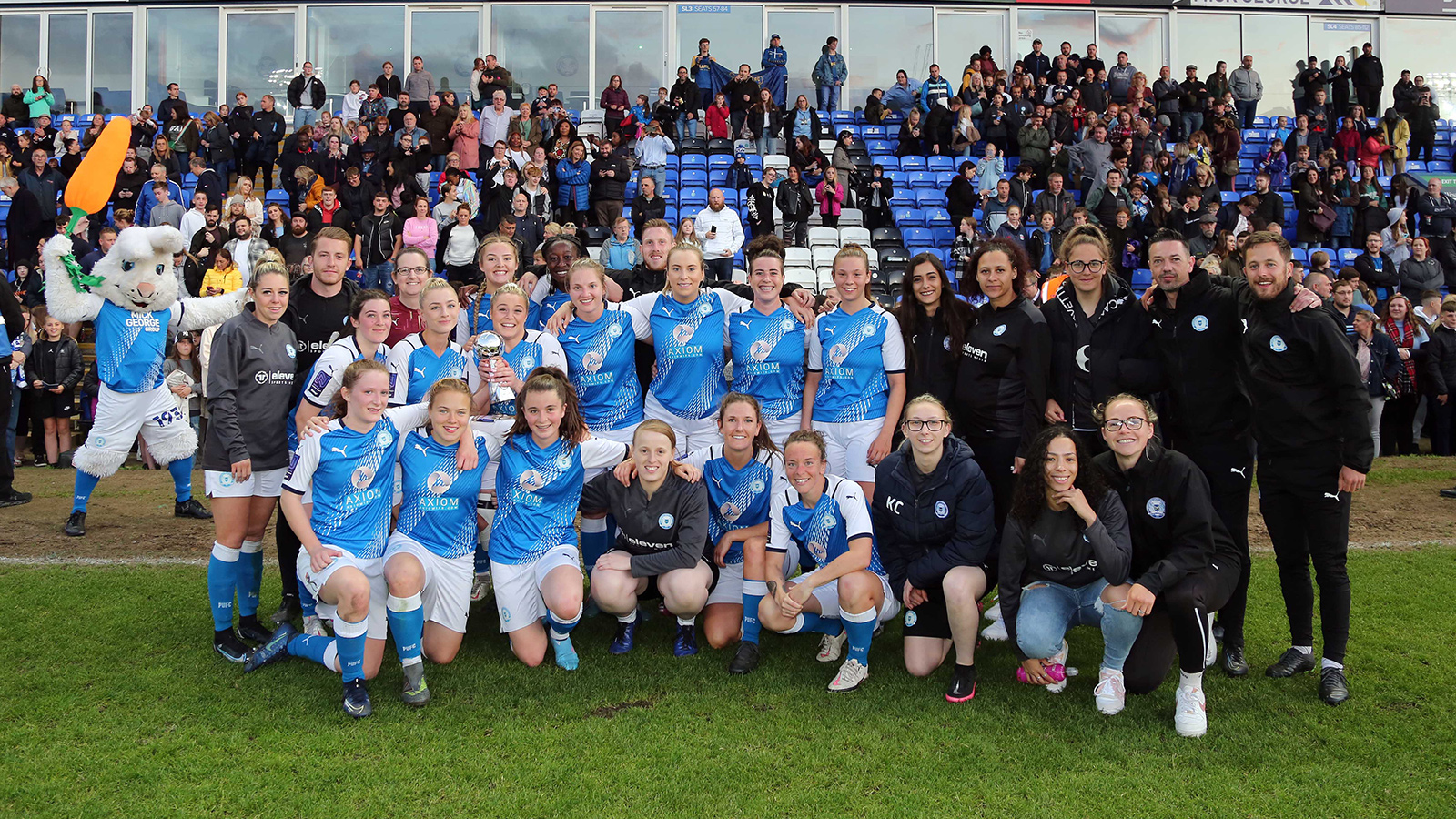 Posh Women claimed an impressive victory in the inaugural HerGameToo Cup and in front of a record-breaking crowd at Weston Homes Stadium.

It was the Posh Women first appearance at the Weston Homes Stadium since 2019 and the players were welcomed to a record-breaking crowd on their return, and their performance certainly didn’t disappoint those in attendance and including the hundreds watching on a live stream.

Hashtag United came close to opening the scoring inside two minutes when Sophie Kelly’s corner was met by Grace Gillard, her header superbly saved by Amy Butler before a second attempt from the defender was cleared off the line from Megan Parrett. Malike Apindia then saw a long-range effort sail over the bar as the visitors enjoyed the early chances.

However, it was Posh that broke the deadlock on 12 minutes as Stacey McConville's ambitious strike from a 35-yard free-kick smashed against the underside of the crossbar, cannoned off the trialist keeper and into the back of the net. The visitors nearly had an instant reply but an impressive block from Niamh Connor maintained Posh lead after Kelly’s free-kick fell nicely to trialist B inside the box.

The visitors got themselves level on 21 minutes as Eva Carvalho capitalised on a mistake from Butler and was able to convert from close-range. Perkins was inches away from reinstating Posh lead as McConville clearance from her own box fell nicely for the striker to latch onto, comfortably beating her defender for pace and squeezed the ball past the keeper, but the post came to the aid for the visitors.

Apindia, who was Hashtag United’s topscorer for the 2021/22 season, narrowly sent an effort wide of the far post after trialist B picked her out with a low-driven cross. The visitors took the lead on 40 minutes, and although Apindia couldn’t find the back of the net, she was providing the chances as she found Carvalho inside the box and she grabbed her second of the game with a fantastic left-footed strike into the top corner.

Posh responded quickly and brought the scores level on the stroke of half-time as McConville met Megan Parrett’s corner, but sent her header onto the crossbar and rebounded into the path of Jess Driscoll, who took one touch and fired home from close-range.

Dan Lawlor’s side retook the lead in the early stages of the second half, and it was a goal full of quality from start to finish, with a brilliant flick and turn from Driscoll to evade her player before a pinpoint pass to set Perkins through, she rounded the keeper and calmly found the back of the net. Parrett saw an effort blocked after brilliant work to advance into the box, including some fancy footwork to beat two defenders and make room for a shot.

Hashtag United still provided a threat and found themselves two-on-one after Connor was pipped in possession, but a loose touch from trialist B allowed Evie Driscoll-King to clear the ball. Posh extended their advantage on 74 minutes and Driscoll was involved in the action again as she latched onto a loose throw from the keeper, charged down the left, her cross found trialist A who scooped her header into the back of the net.