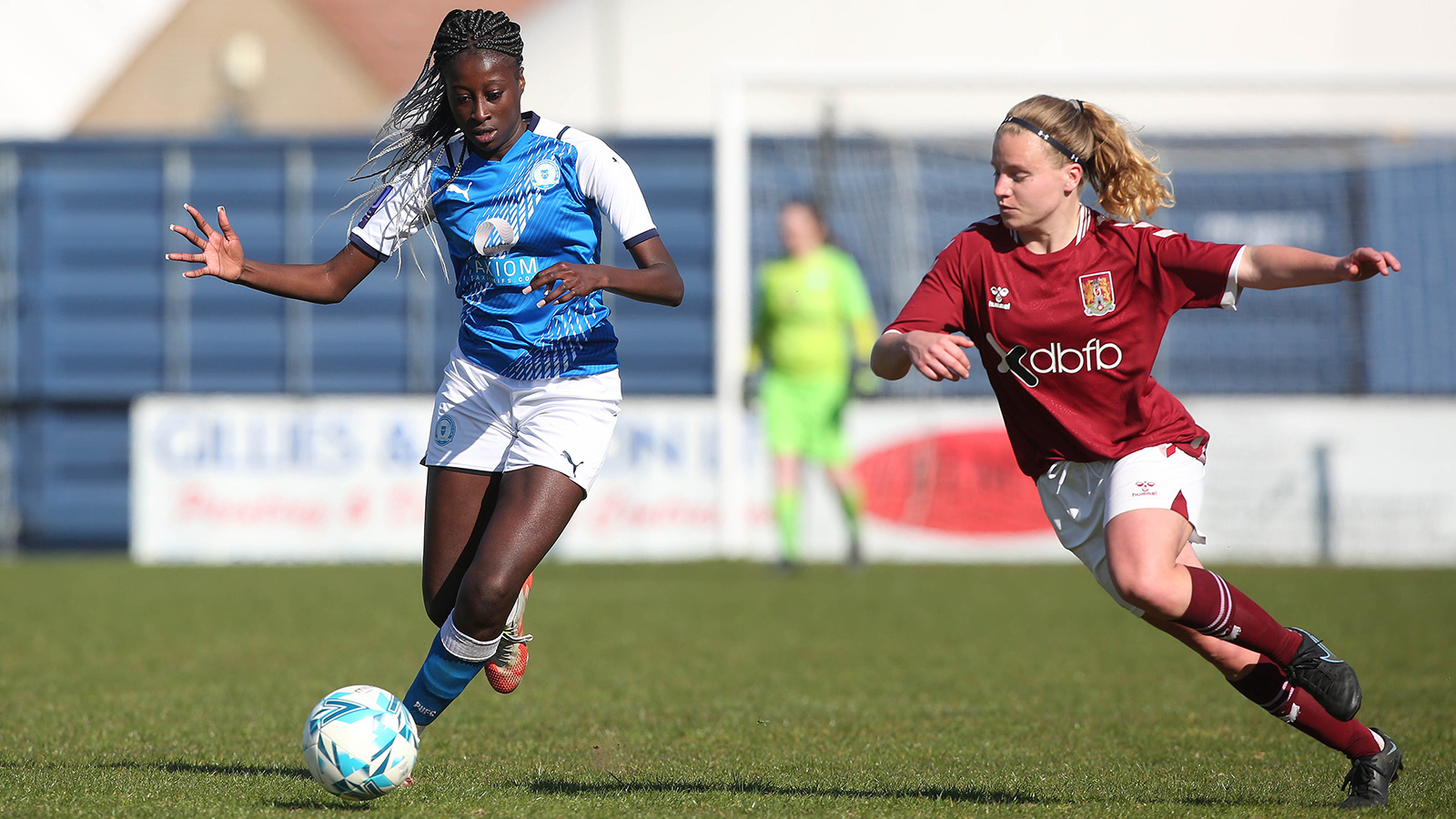 The first opportunity fell within the first 60 seconds of the game as Niamh Connor rose highest from Kayleigh Aylmer’s corner, but she could direct her header wide of the post. Northampton Town opened the scoring on six minutes as Eden Brown headed home Leah Cudone’s free-kick from close-range.

However, the lead to The Cobblers lasted only for a minute, as Aylmer delivered another teasing corner from the right-hand side and Jess Driscoll was on hand to head home from within the six-yard box. The midfielder saw an effort from the edge of the box easily collected by the keeper.

Driscoll was involved in the action once again on 13 minutes, and should have handed Posh the lead, as Aylmer’s corner fell on a plate for Driscoll in the exact same place, but this time lifted her header over the bar. The midfielder provided a vital block in her own box to keep out Rachel Mumford’s powerful volley.

On 18 minutes, there was a lengthy stoppage in play due to a serious injury to Brown, who opened the scoring at Steel Park, and she was stretchered off the pitch after 35 minutes and thankfully to an ambulance, with everyone at Posh wishing her a speedy recovery.

The game got back underway and Northampton Town quickly reinstated their lead on 27 minutes as substitute Beth Artemiou showed great pace down the left channel, found Alex Dicks inside the box and she fired past Amy Butler. Dicks advanced into the box once again on 45 minutes, but her effort was pushed behind for a corner by Butler.

Dan Lawlor made a change at the break as Nicole Hendrick replaced Destiny Makanjuola. Driscoll was booked on 49 minutes for pulling back Mumford’s shirt. Posh failed to clear a corner, the ball fell to Cudone who managed toget a shot away which was routine for Butler.

On 56 minutes, Aylmer's free-kick was behind Cassie Steward, who showed great initiative to flick the ball over her and towards goal, which forced the keeper to push it around the post. Katie Steward then fired well over the bar from close-range after Keir Perkins and Hannah Hipwell both saw efforts blocked by resilient Cobblers’ defence.

Posh made their second change of the afternoon on 65 minutes as Stacey McConville replaced Katie Steward. With the clock ticking down, Posh had an excellent opportunity to level the encounter on 76 minutes as Hipwell free-kick from 30-yards was dropped by the keeper and wasn’t cleared, the ball fell to Perkins inside the box, on the bounce, and she couldn’t keep her effort down.

Northampton Town were inches away from extending their advantage in injury time, but Charlie Cooper was unable to poke home Leah Cudone cross at the back-post.