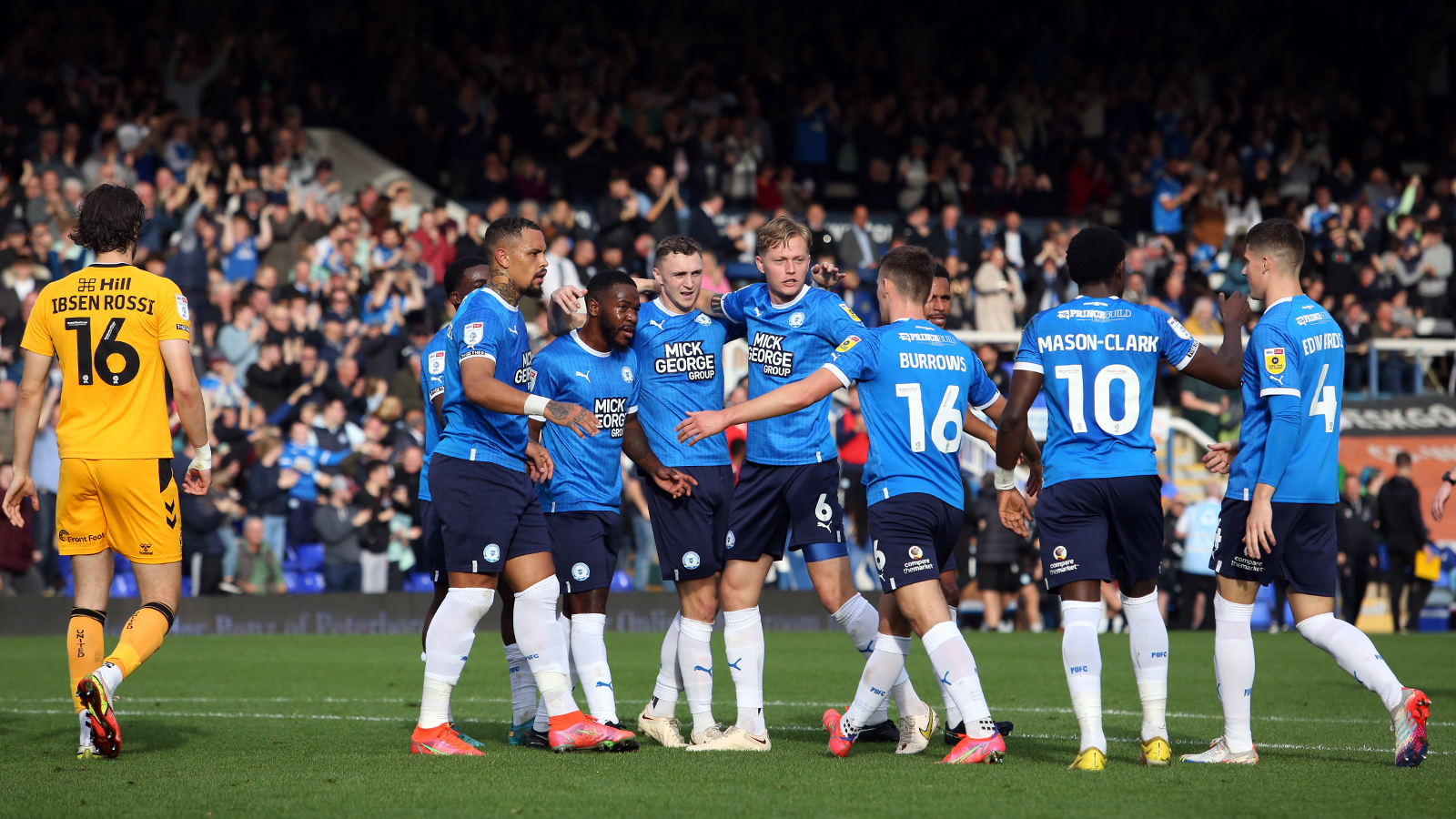 Posh made it three wins in a week and secured the derby day bragging rights after a Lloyd Jones own goal earned Grant McCann’s men all three points.

Cambridgeshire is blue. Any local derby is going to be full of blood and thunder and this was no different, but although it was just a solitary own goal from Lloyd Jones that split the two teams, there was no doubt that Grant McCann’s men squandered a host of opportunities to make the score-line more comfortable and reflect the performance.

It was a lively start to the derby both on and off the pitch but aside from an Ironside looping effort from close-range, the first 10 minutes passed without a shot on goal, although the tackles were flying in as you would expect.

Harrison Burrows dragged a shot wide of the target on 14 minutes after good work from Ephron Mason-Clark. The deadlock was broken on 17 minutes and it was an own goal from Lloyd Jones who couldn’t deal with a corner from Harrison Burrows set-piece.

Mason-Clark had the chance to double the score on 20 minutes as he raced onto a Kwame Poku pass, but the in-form former Barnet winger fired his right-foot shot wide of the far post. Burrows saw a curling effort deflected behind for a corner kick on 24 minutes after good link-up play between Poku and Fuchs.

Cambridge coach Barry Corr was cautioned for dissent on the half hour mark by referee Mr Oldham. Dan Butler tested Mannion with a stinging drive from nearly 30-yards with the goalkeeper doing well to keep it out at full-stretch.

The visitors had a great chance to level on 34 minutes as a cross from the left picked out Joe Ironside six yards out but he somehow managed to head over when it looked easier to score. Clarke-Harris was superbly denied by Mannion on 37 minutes after feinting to create the space before Taylor’s shot was blocked.

Frankie Kent was cautioned for a high challenge moments later, his fifth caution of the campaign meaning he will miss the trip to Exeter City. Simper was cautioned moments later for a foul with Posh disappointed the official didn’t play the advantage with Posh in possession.

Edwards produced a superb block as the ball rebounded around the six-yard box within a few minutes of the re-start as the U’s came out of the traps quickly. Mannion produced a fine tip over to deny Mason-Clark on 51 minutes before Clarke-Harris saw a looping header hit the top of the crossbar before bouncing to safety.

Mason-Clark made a chance for himself on 55 minutes, but the winger couldn’t guide his shot on target from an incredibly tight angle. Taylor then headed a Burrows centre wide of the target as Posh tried to find a second goal.

Mark Bonner made a triple change on 65 minutes with Tracey, Smith and O’Neill introduced into the action. Bergström produced a fine one-handed stop to keep out Knibbs on 70 minutes after a foul on Taylor by the touch-line went unpunished. Williams was then cautioned for the visitors for a foul on Poku off the ball.

Grant McCann made his first change on 72 minutes with Ricky-Jade Jones replacing Poku as Mason-Clark moved across to the right hand side of the Posh attack. O’Neill was booked for a challenge off the ball as the game moved into the last 10 minutes.

As the game moved towards stoppage time, substitute Jack Marriott thundered a left-foot effort against the post before Kell Watts was introduced for Mason-Clark. Five minutes of added time was indicated by the fourth official.