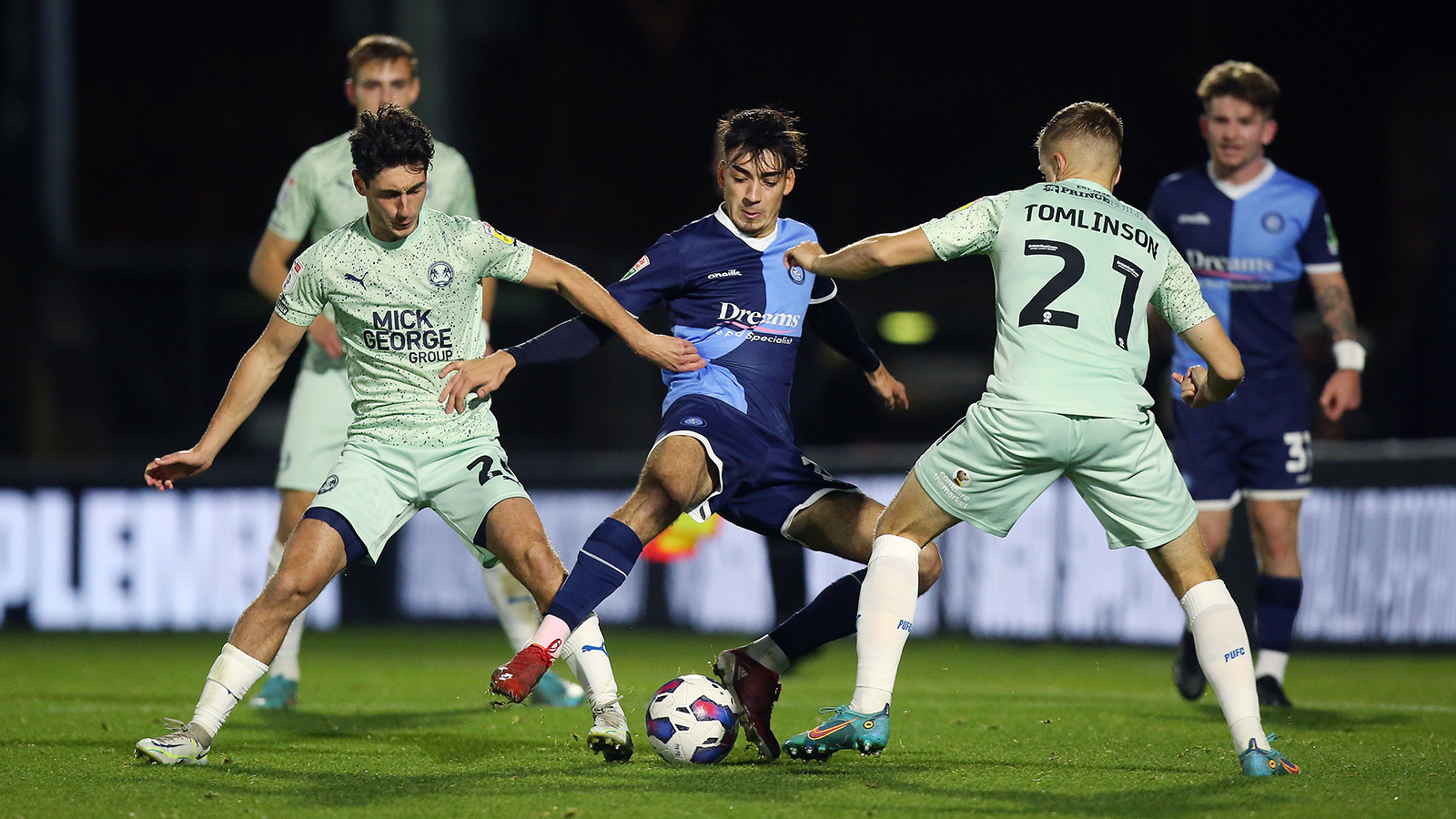 Posh progress into knockout stages of the Papa John’s Trophy after collecting point they needed at Wycombe Wanderers.

“Siri. ‘Tell me a penalty shoot-out that is pointless’.

“Wycombe v Peterborough United in the Papa John’s Trophy in 2022.”

Grant McCann’s men had already picked up the point they needed to progress in the 90 minutes, Wycombe were out, yet bizarrely and somewhat needlessly, everyone was subjected to a penalty shoot-out, a shoot-out that the hosts won to earn them a bonus point they didn’t need or want.

Jack Marriott and Ephron Mason-Clark both had efforts inside the opening ten minutes, but neither strikes came close to testing goalkeeper Max Stryjek in the Wycombe goal. Hector Kyprianou fired wide of the target moments later after a marauding run from midfield after good initial work from the returning Ronnie Edwards.

Kell Watts powered a header wide of the target from a deep Joe Ward corner kick on 12 minutes as Posh continued to create the half-chances being created in the tie. Stryjek was forced to make his first save of the evening on 22 minutes, keeping out a low shot from Ephron Mason-Clark after a good pass into his path from Kyprianou.

Mellor headed over the top from a right-wing centre on 29 minutes as the hosts registered their first shot on goal. Stryjek produced a fine save to tip over a Ronnie Edwards header just after the half hour mark after a driven Burrows corner was cushioned back across goal by Watts.

Burrows headed over from a Ward cross on 33 minutes moments after finding the trees behind the goal with a pot-shot from range. Tomlinson saw a shot blocked after another slick Posh move four minutes later.

Randall tested the keeper on 38 minutes after another good move, the former Exeter man showing plenty of purpose with his run before letting fly on the angle. Tomlinson was next to try his luck, but his low drive from distance was routine for the keeper.

Within a minute of the second half getting underway, Burrows sent a header a whisker wide of the target after a driven cross from a wide area from Marriott. On 52 minutes, Posh carved out a really presentable chance to open the scoring as Burrows and Ward combined with the latter’s centre guided over the bar by Randall.

Against the run of play, the Chairboys opened the scoring on the hour mark as Daryl HORGAN finished well after a scrappy piece of defending from Grant McCann’s men. Posh made a double change on 65 minutes with Jonson Clarke-Harris and Ben Thompson introduced into the fray. Moments later, a corner caused panic, but a combination of brave defending kept Posh out with Fuchs going close.

Kaikai saw a low shot saved by the Posh keeper at the other end as Posh moved players forward to try and get back into the game. Forino was shown a yellow card for a reckless challenge on Fuchs as the game moved towards the final 10 minutes with Posh at this stage heading out of the tournament.

On 82 minutes, Posh got themselves level and it was a delightful cross from Burrows that was headed home at the far post by Jonson CLARKE-HARRIS for his 11th goal of the campaign. Clarke-Harris saw a clever flick cleared from the goal-line by Forino on 88 minutes.

Wycombe won the utterly pointless penalty shoot-out 4-3 with Kell Watts, Ronnie Edwards and Joe Ward missing the Posh spot-kicks. But nobody cares anyway about that.