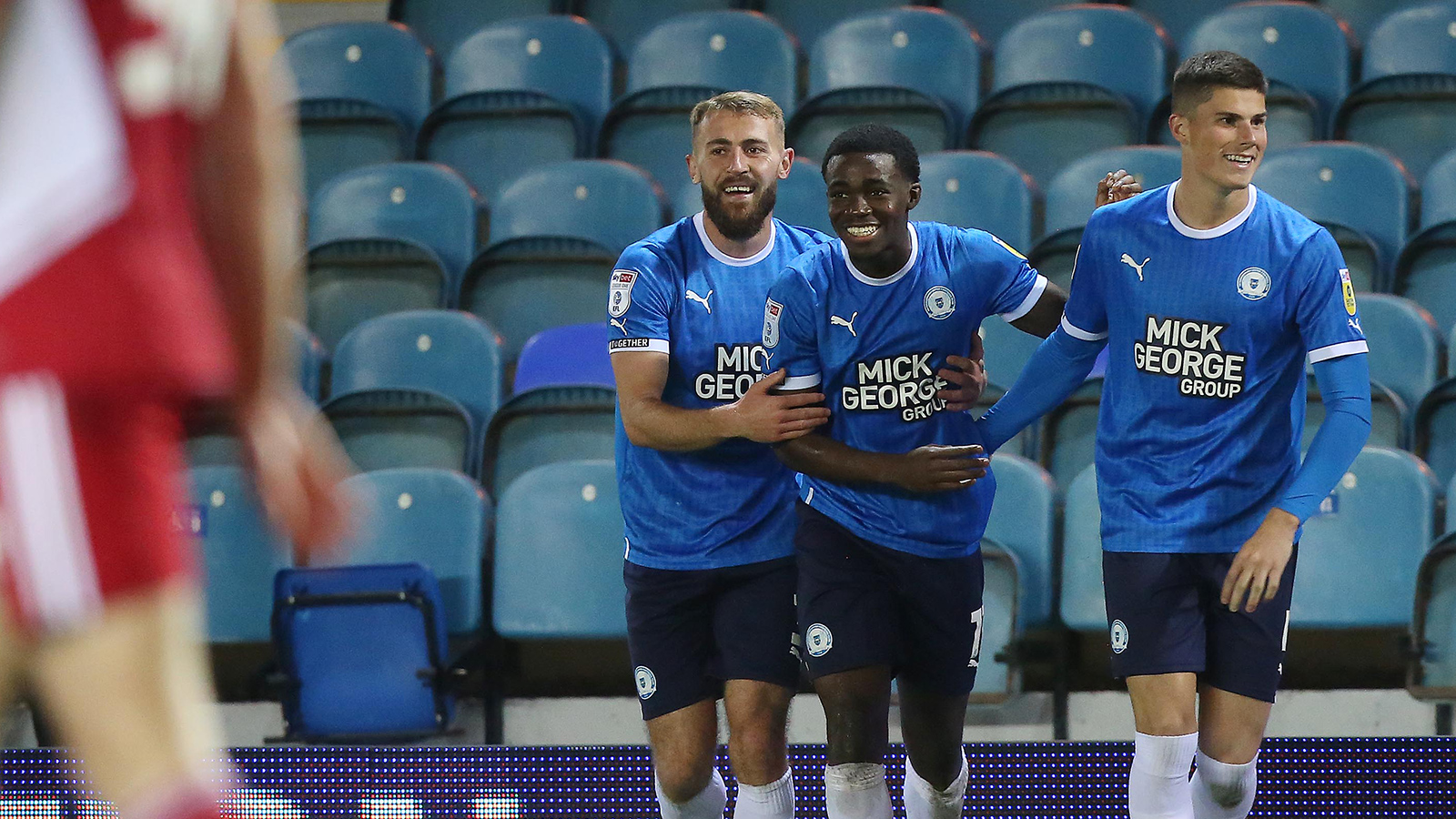 You never forget your first goal. Well, Jonson Clarke-Harris admitted after the 3-1 victory over Accrington Stanley he remembers the opposition, but doesn’t believe it will be remembered by those that were there. Those present at the Weston Homes Stadium on Tuesday evening and most importantly, the goal-scorer Ephron Mason-Clark, will never forget the strike that brought Peterborough United level. It was a magical moment for the summer signing as he arrowed a stupendous shot into the top corner from the edge of the box.

Jack Taylor guided a shot wide of the target from a deep Harrison Burrows corner kick inside the opening two minutes, but the midfielder was under severe pressure as he tried to keep his effort under control.

Toby Savin produced a fine reaction stop to keep out Kwame Poku on four minutes as the former Colchester man found some space and directed a well-struck first-time effort towards goal. Liam Coyle was cautioned for a late foul as referee Craig Hicks quite rightly cautioned the Accrington Stanley midfielder.

Ephron Mason-Clark, fresh from two assists on his first league start at the weekend, glanced a header wide after good work from Dan Butler down the left. Midfielder Jeando Fuchs was cautioned on 22 minutes, a yellow card that would have ruled him out of the Cambridgeshire derby, however one of those bookings came in the EFL Trophy, which operates a different disciplinary process.

The visitors opened the scoring moments later, McConville saw his initial effort crack against the crossbar before Harvey RODGERS looped a header over the goalkeeper and into the back of the net. On 26 minutes, Jack Taylor floated a free-kick harmlessly over the crossbar from a presentable position just outside of the penalty area.

McConville was denied by Bergström from a dead ball situation just before the hour mark as the visitors came close to a second goal. Posh levelled the scores on 33 minutes and you will not see a better goal all month, in fact as first goals for the club goes, you won’t find much better than that from Ephron MASON-CLARK, a stunning strike into the top corner from the edge of the box.

Five minutes into the second half, Posh got their noses in front for the first time in the contest and it was another assist for Mason-Clark, who shrugged off a challenge to square the ball for Kwame POKU, who made it two in two with a composed close-range finish.

Posh had the ball in the net again on 53 minutes as Nathan Thompson tucked home from a Clarke-Harris cut-back, but the offside flag was raised. Savin produced a fine stop to claw a curler from Burrows over the bar after the youngster had exchanged passes with Taylor in midfield. Taylor was cautioned by the referee moments later for a foul in the right-hand channel.

Bergström produced an unbelievable reaction stop to push a close-range Hamilton header onto the bar and then to have the presence of mind to kick the loose ball clear off balance as Accrington tried to force home the rebound. Posh made it 3-1 within a couple of minutes, a long ball was superbly dealt with by skipper CLARKE-HARRIS who used his strength to ease the defender away and calmly slot the ball past the keeper.

Tharme was cautioned for an ugly looking lunge on Poku on 62 minutes. Taylor clipped the top of the crossbar from a dead ball situation out wide before the same player put pressure on Kent with a square pass, the defender eventually doing well to block.

Ryan Astley was booked for a foul on Poku as he tried to break at pace from a corner that was helped on by Burrows. Mason-Clark glanced a header wide from an in-swinging Marriott cross on 86 minutes as Posh pushed for a fourth.

Rodgers was cautioned for shoving and then throwing a ball at Cliff Byrne, who also bizarrely received a caution.