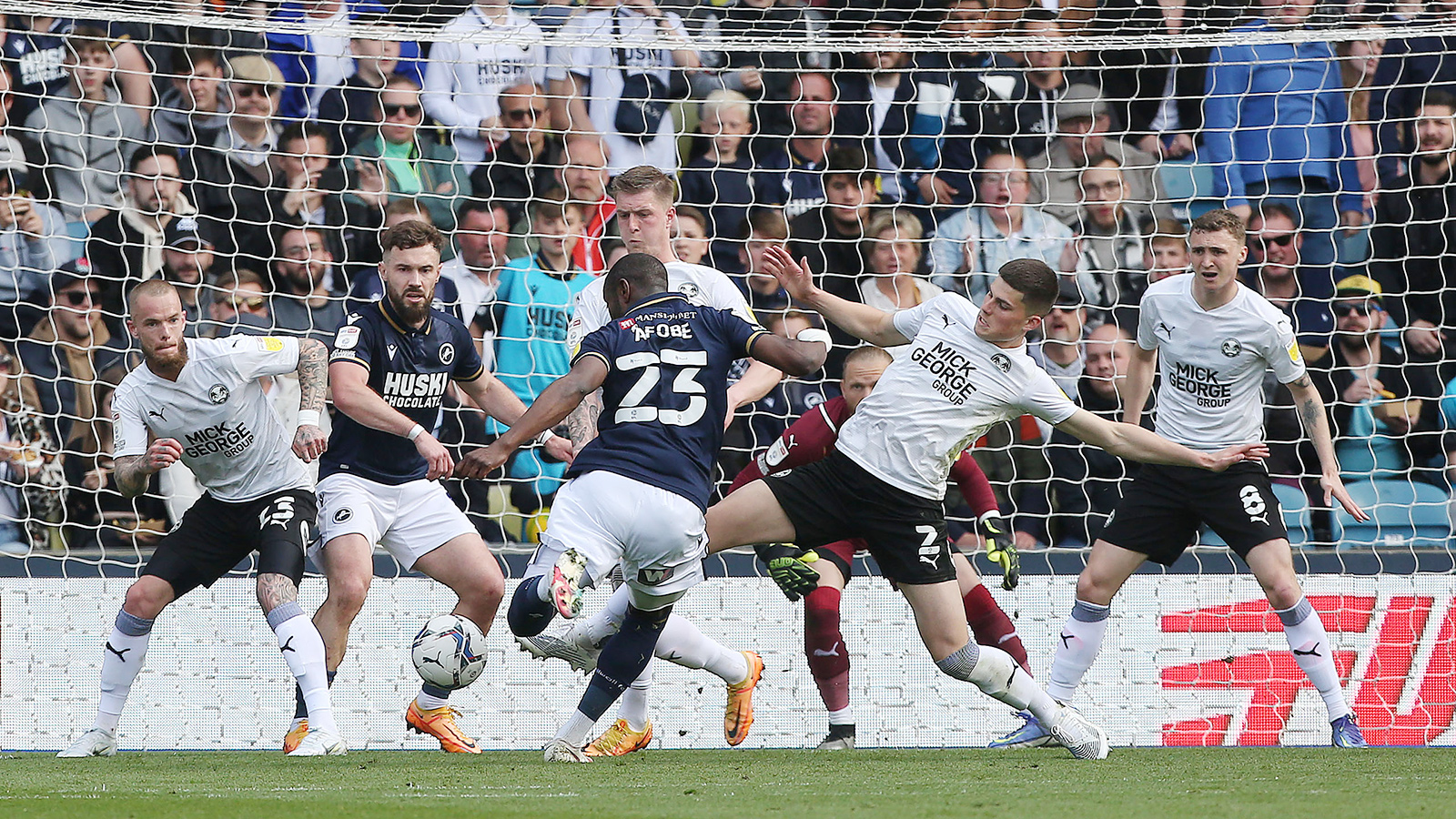 Lions Roar In Second Half As Posh Beaten

Posh were beaten 3-0 by Millwall at the Den, who certainly had a helping hand from the officials for the opening goal of the game.

Manager Grant McCann openly admitted following the 90 minutes at the New Den that his side should have defended the crucial opening goal of the game better, but he was rightly disgruntled at the award of the throw-in that led to Benik Afobe rifling home as the assistant failed to spot a fairly blatant deflection in Peterborough United’s favour.

As it was, Afobe’s strike was followed by two quick-fire goals for the hosts, the first an own goal from Josh Knight, which was added too by George Saville’s close-range header. Posh played well for large periods, but didn’t take advantage of that territory when they got in good positions at the New Den.

The home side won a number of corners in the opening exchanges, but Posh were defending bravely as the quarter mark was reached with the score goalless. Shaun Hutchinson headed over the top from a corner, but Grant McCann’s men were defending resolutely against a physical opponent, who have enjoyed a strong campaign.

Posh carved out the best opportunity of the first half on 39 minutes as Szmodics picked out the run of Clarke-Harris, but he tried to flick the ball with his left-foot rather than swing his right and it went well wide.

Szmodics floated a shot on target as the half drew to a close after more excellent football from Grant McCann’s men. Cornell produced a fine stop to keep out Saville moments into the second half as the Lions came out of the traps quickly.

Clarke-Harris scooped a right-foot shot over the top after a cross from Knight on 48 minutes as Posh found some space down the right hand side. Marriott was superbly denied by Bialkowski moments later after a sharp turn and shot with his left-foot from 25-yards was arrowing towards the bottom corner.

The home side got their noses in front on 52 minutes and was slightly fortunate how it landed at the left-foot of Benik AFOBE, but his strike was clean and found the back of the net. Posh were fuming that a throw in was given in favour of the hosts by the assistant referee when it clearly struck the Millwall man last.

Gary Rowett made a double change straight after the goal with Jed Wallace and Mason Bennett introduced into the fray. McCann replied by making a double change himself with Ricky-Jade Jones and Kwame Poku replacing Kent and Marriott in a change of shape.

Murray Wallace saw a deflected effort clip the top of the crossbar before Saville struck the post from close-range with a header as the hosts, buoyed by a rather fortunate opener, piled on the pressure. Ward flashed a left-footed shot wide of the target after a well worked set-piece as the game reached the 65th minute.

The hosts doubled their lead on 73 minutes as a dangerous cross from the right was missed at the near post and it struck the knee of Knight and rebounded into the back of the net. The Lions made it 3-0 on 75 minutes as a deep cross from Jed Wallace was powered into the net by George SAVILLE moments after Cornell had produced a fine stop to keep out Cooper.

Clarke-Harris was denied by Bialkowski on 79 minutes while Randall saw a shot deflected wide.