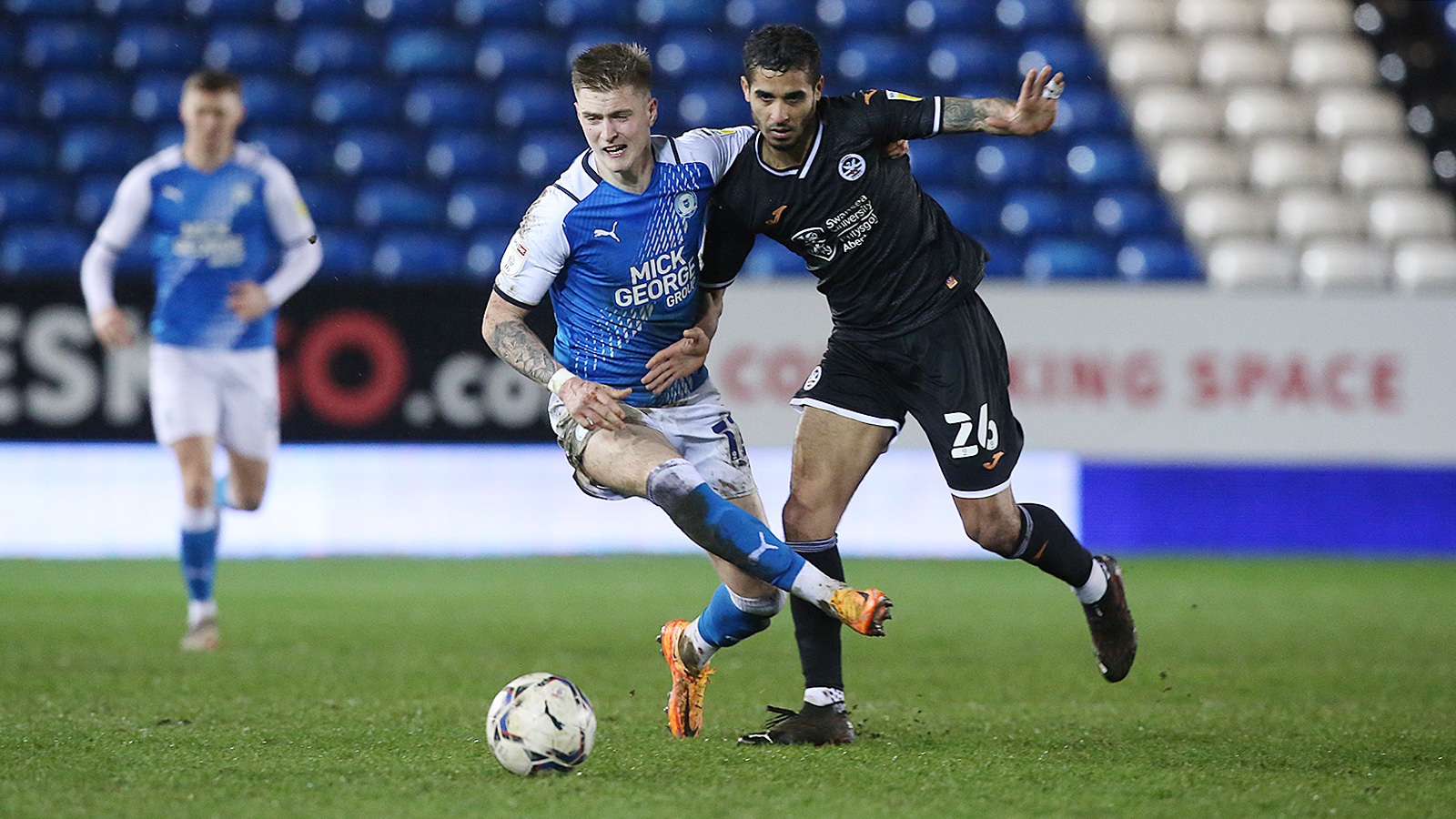 Peterborough United suffered a late defeat to Swansea City in Sky Bet Championship action at the Weston Homes Stadium as Joel Piroe struck to give Russell Martin’s men all three points after Sammie Szmodics and Jack Marriott had at one stage put Grant McCann’s men 2-1 up.

Ricky-Jade Jones made a lively start to the game, showing the full-back a clean pair of heels on two occasions, his cross for the first run just eluded Jonson Clarke-Harris in the six-yard box.  A similar run from Joe Ward down the right created a half chance for a stooping Szmodics, but that effort cleared the crossbar.

Obafemi was denied by Cornell on seven minutes as Posh made a hash of clearing as the lively opening to the contest continued. A cross-shot from Grimes was tipped over by Cornell on 18 minutes as the Swans enjoyed a prolonged spell of possession.

Obafemi scooped an effort over the top on 27 minutes after a slick bit of play from the visitors. Cornell produced a fine one-handed stop to beat away a Piroe shot on the turn on 41 minutes as the visitors came close again.

A minute before the interval, the visitors got their noses in front as OBAFEMI squeezed a shot over Cornell from a tight angle after a slick Swans move. Christie was cautioned three minutes into the second half for a foul on Mumba by referee Oliver Langford.

Posh drew themselves on 50 minutes, excellent work from Jones down the left and his intelligent cut-back was swept home first time by SZMODICS. Knight was cautioned for a tussle with Piroe by the touch-line on 55 minutes.

Grant McCann was forced into a change on the hour mark as Jones was forced off with a shoulder injury to be replaced by Jack Marriott. It was an instant impact for MARRIOTT as some shocking defending ended with the ball at the feet of substitute and he slotted into the corner.

Cornell beat away a Grimes shot on 65 minutes as the visitors made a lively response. The visitors levelled the scores from close-range on 71 minutes as OBAFEMI tapped home after an initial Nctcham effort had struck the post.

Paterson was kept out by Cornell at full stretch as seven minutes of injury time was indicated by the fourth official. Less than 60 seconds into stoppage time, PIROE nudged the visitors in front as he curled into the back of the net as the ball fell kindly to him just inside the box.