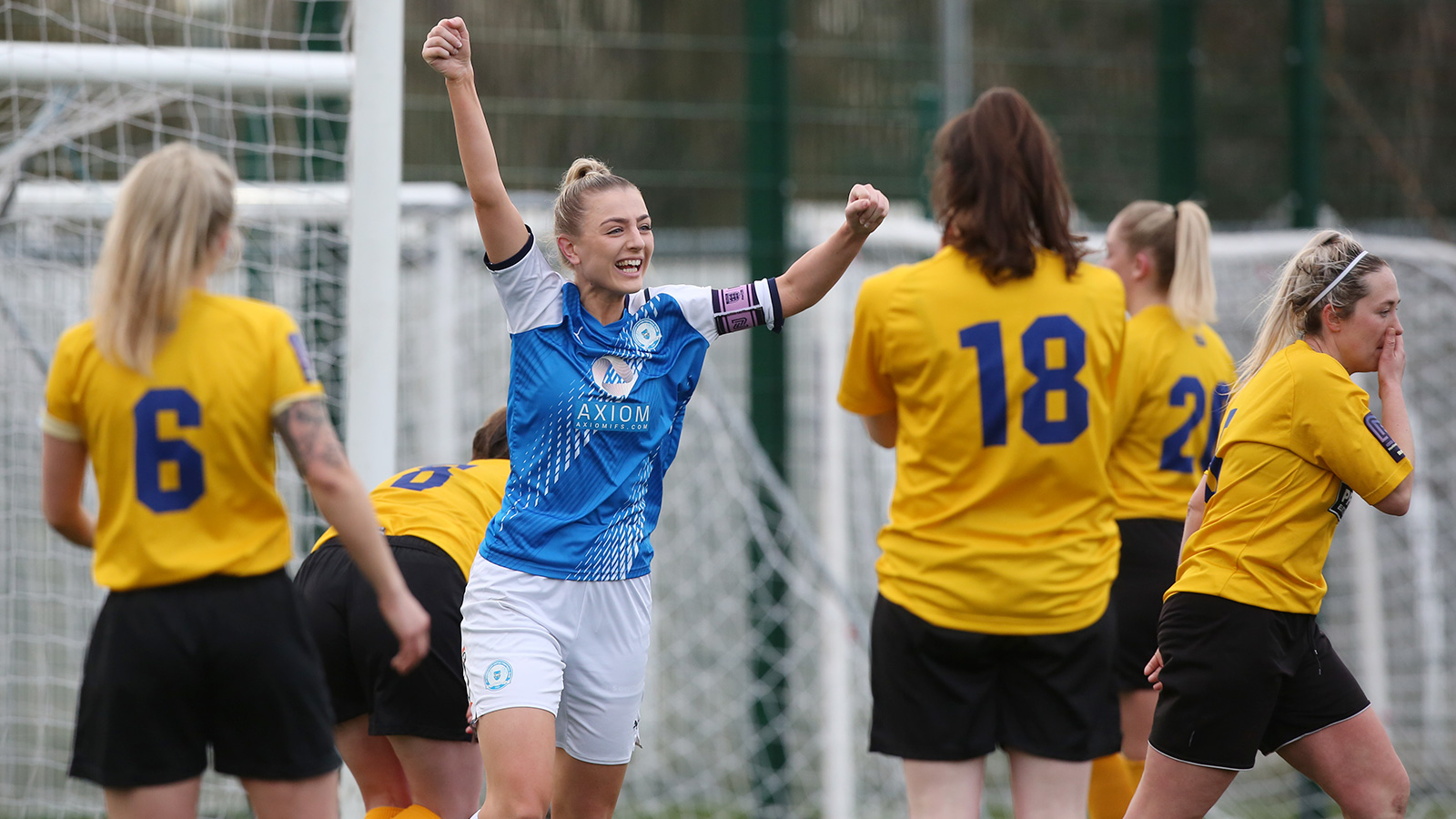 Keir Perkins netted an equaliser in the final 10 minutes to rescue a point for Posh Women against Leek Town Ladies.

Another season nearly completed, another campaign with 20 goals reached for captain Keir Perkins and arguably one of her most important goals this season as her late strike earnt Peterborough United Women a 1-1 draw with Leek Town Ladies at the idverde training ground.

The visitors opened the scoring inside the opening 10 minutes, but Posh showed great character to get back into the game, dominating majority of the game for 85 minutes, but lacked that killer instinct infront of goal. However, the pressure finally took its toll though as Perkins fired home from close-range in the closing stages to seal a well-deserved point.

Kayleigh Aylmer nearly broke the deadlock after just two minutes when her low cross recohered off the Leek Town defender and onto the post. At the other end, the visitors broke quickly in numbers, Mollie Garner raced clear on the right-hand side and tried to pick a teammate at the back-post, but was too far in front of the on-rushing forward.

Leek Town broke the deadlock on nine minutes, Cassie Hyde rising the highest from a corner to head home from close-range. Posh responded well after going behind, Perkins won the ball back on the right and looked to find Aylmer at the back-post, who effort was blocked superbly by the defender on the floor.

The two linked-up once again in the closing stages of the first half, this time the roles were reverse as Aylmer played a lovely ball in behind for Perkins, who tried to loft the ball over the keeper but failed to get enough weight on her effort. Leek Town keeper produced a fine fingertip save to divert Cassie Steward effort over the bar.

Minutes before the break, Posh sent another opportunity begging as Aylmer played it across to Katie Lowder and she sent her effort well over the bar. Steward saw a long-range effort force the Leek Town keeper into a routine save in the early minutes of the second half.

Steward thought she finally got the best of the resolute back-line of Leek Town as she beat the defender to the ball first, setting a three on two for Posh until the referee stopped play for an injury in the build-up. Parrett sent a curling effort just wide of the far post as Posh continued to push for the equaliser.

Dan Lawlor made his first change of the afternoon as he replaced Hannah Hipwell for Beatriz Borque. Amy Butler was forced into her first save since conceding the goal on 72 minutes as she got down low to push a close-range effort onto the post before smothering the rebound.

Kayleigh Aylmer was the next player to make way as defender Niamh Connor entered the pitch for the final 15 minutes. The visitors did have the ball in the back of the net once again, but the referee blew his whistle for a foul in the build-up.

Destiny Makanjuola replaced Parrett as Lawlor made his third change on 80 minutes. Posh found the leveller they fully deserved on 82 minutes, Lowder’s corner forced a scramble inside the opposition box as both Connor and Jess Driscoll had efforts blocked before the ball fell into the path of Perkins and she converted from close-range.

Subs Not Used: Marson and Powell.