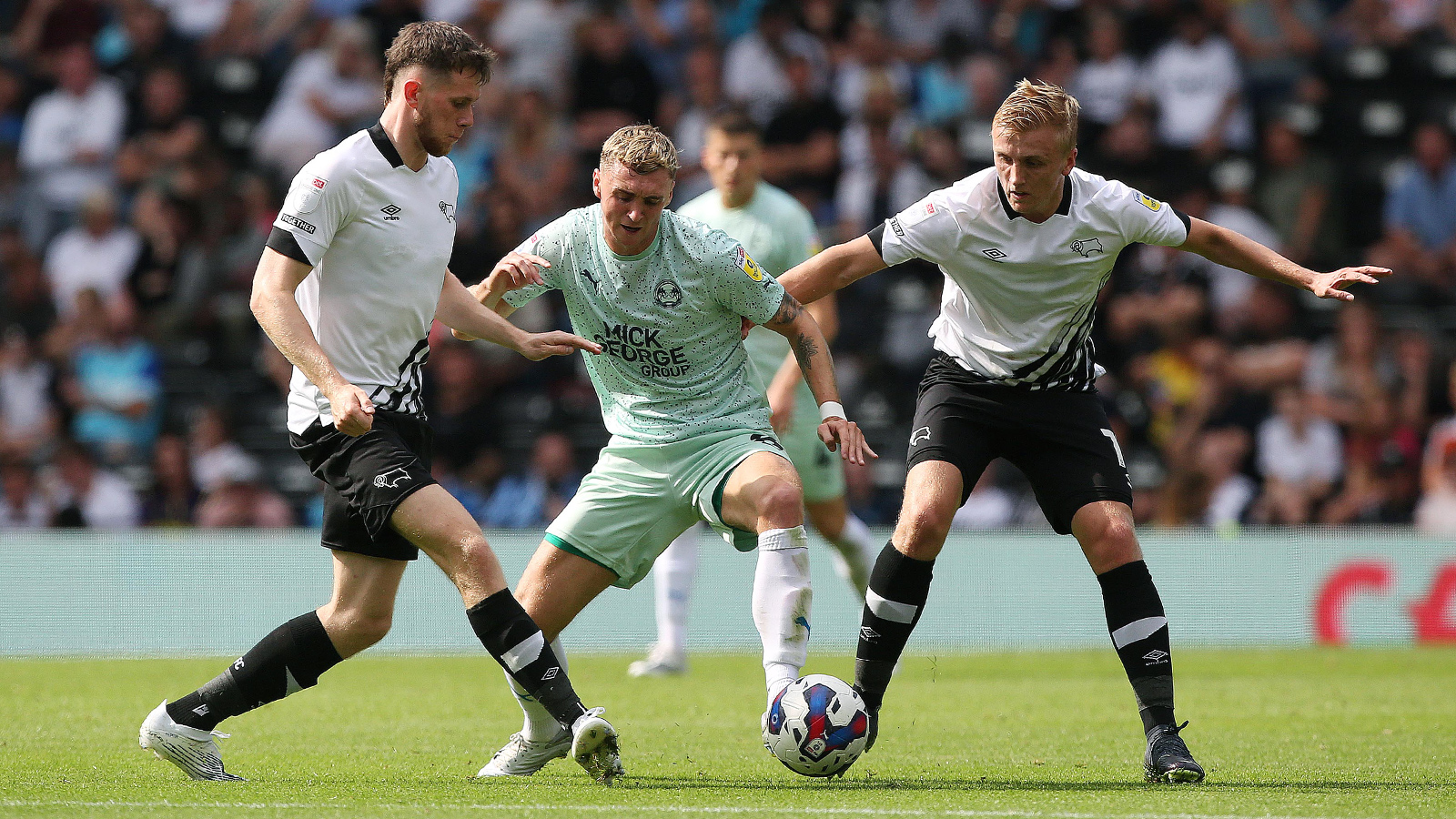 Referee Robert Madden took centre stage at Pride Park as Peterborough United were forced to play over half an hour with 10-men after the official handed a second yellow card to Nathan Thompson, a decision that ended up having a strong bearing on the outcome as the 11-men scored twice in the final 10 minutes to secure all three points.

Posh were presented with a good opening within the first four minutes as a terrible pass from goalkeeper Joe Wildsmith was intercepted by Jack Marriott, but against his former club, he lashed his shot over the crossbar.

Derby carved out an opportunity of their own with 60 seconds, but Louie Sibley fired wide of the near post after an intelligent cut-back from Jason Knight. Bergström then made a good reflex stop to keep out Louie Sibley and from the resulting corner kick, the keeper made a double stop to keep out James Collins and Sibley on the rebound.

Taylor was cautioned by referee Robert Madden on 25 minutes for persistent fouling. Dobbin fired over from a tight angle for the Rams moments later after Ward had been dispossessed on the edge of his own area by the experienced Collins.

Nathan Thompson was booked on 28 minutes by referee Bobby Madden who clearly didn’t have much sight of the incident as the experienced defender was pinned to the floor by the Derby winger. Barkhuizen fired over from 25-yards on 32 minutes after Collins did well to pull the ball back into the path of the former Preston North End man.

Clarke-Harris, on his 100th appearance for the club, sliced a left-foot shot wide of the target when well positioned after taking a good first touch following a raking pass forward. Burrows was cautioned on 40 minutes for his first indiscretion of the game as referee Robert Madden continued to frustrate the visiting fans.

Burrows tested Wildsmith with his right-foot moments later after the referee waved advantage despite Marriott clearly being upended in a dangerous position. Bergström produced a good save deep into first half stoppage time from Barkhuizen before Nathan Thompson denied Hourihane with the rebound.

Ben Thompson fired over from 30-yards after a poor clearance from Wildsmith on 50 minutes after good pressing from Marriott. Posh were reduced to 10-men on 57 minutes as referee Bobby Madden, who had cautioned Nathan Thompson for nothing in the first half, then failed to spot a blatant dive, booking the defender a second time.

Stearman was cautioned for bringing down Clarke-Harris on 63 minutes as referee Mr Madden finally awarded a yellow card to the hosts. Posh opened the scoring four minutes later as a Burrows cross was glanced on at the near post by Kent and stabbed home from close-range by substitute Josh KNIGHT.

Bergström did well to hold a swerving effort from Sibley on 75 minutes as Derby tried to get themselves back level.  Grant McCann introduced new signing Ephron Mason-Clark on 76 minutes with Marriott the man withdrawn.

Substitute Forsyth clipped the crossbar with a cross-cum-shot on 82 minutes as the Rams pressed with the numerical advantage. With three minutes remaining, the hosts levelled the scores as a corner was headed home by Jason KNIGHT.

The hosts turned the game around in stoppage time as David McGOLDRICK tapped home from close-range after huge pressure from the hosts. Poku saw a late effort saved by Wildsmith, but it was heartbreak for McCann’s men who had battled gamely with 10-men.