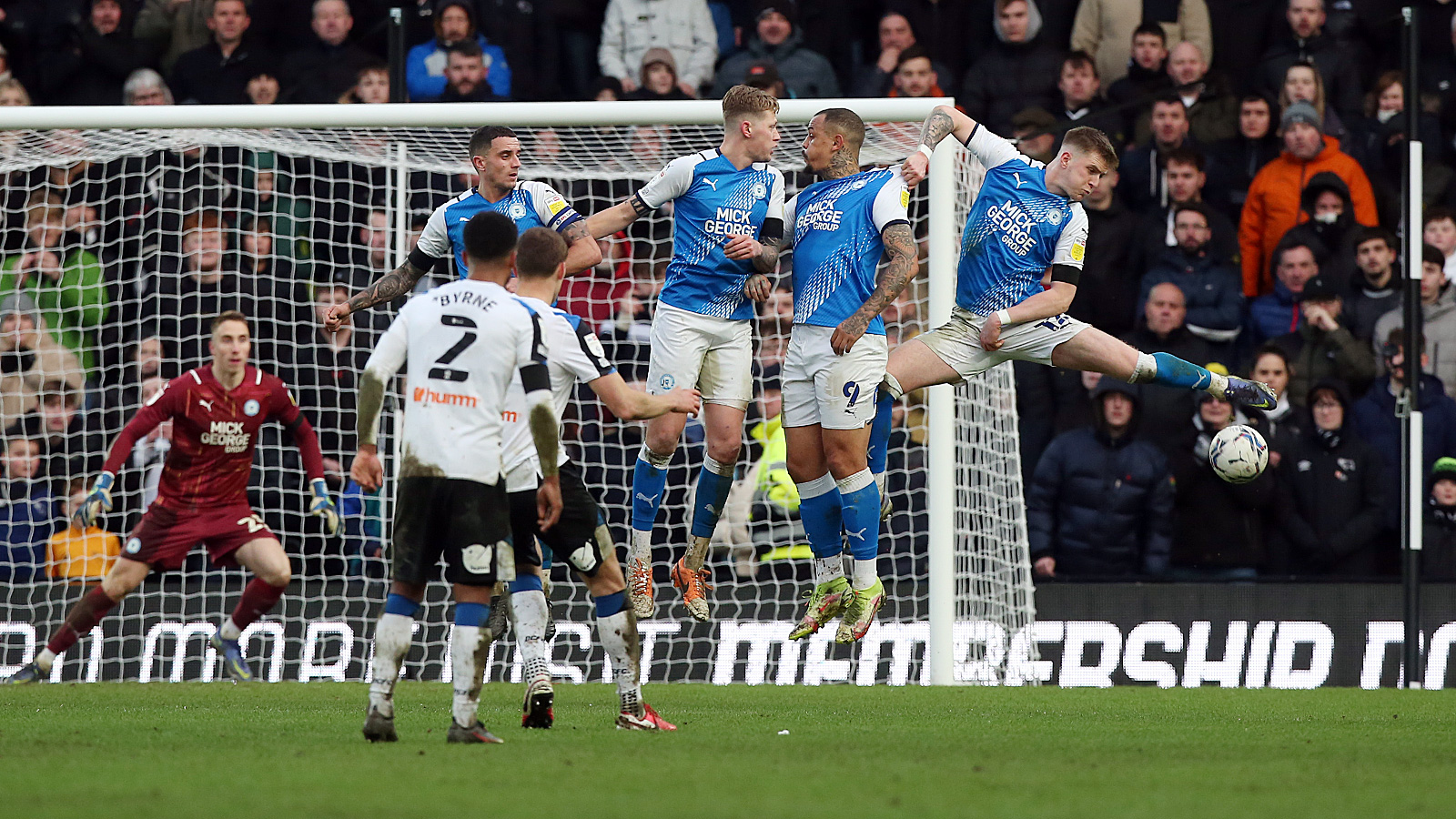 A goal in stoppage time from substitute Louis Sibley earned Derby County all three points at Pride Park on an afternoon where both sides saw a player sent off with Hayden Coulson and Tom Lawrence sent for an early bath.

Goalkeeper Steven Benda produced a fine stop to keep out a piledriver from Tom Lawrence on eight minutes while experienced centre back Curtis Davies flicked a header over the top after successive Rams corner kicks. Reece Brown fired wide from 30-yards at the other end after a Hayden Coulson corner was only half-cleared.

A cross from Coulson struck the outside of the post on 18 minutes as Posh did well to keep possession in the final third. Coulson was cautioned for an attempted foul on the half hour mark by referee Mr Linington, he made no contact, but it was the intent the official didn’t appreciate.

Posh were reduced to 10-men on 35 minutes as Coulson was shown a second yellow card for another tackle where there was minimal contact. Benda did superbly well to tip over a Bird half-volley moments later before Posh made a change as Bali Mumba replaced Morton.

The referee indicated two minutes of added time, which Posh saw out to get to the dressing room with the score level at 0-0. The hosts were reduced to 10-men on 47 minutes as Lawrence was sent-off for a ludicrous challenge on Thompson.

Darren Ferguson responded with a change with Jonson Clarke-Harris replacing Fuchs. Brown was cautioned for a foul on the edge of the box and from the resulting free-kick, Bird struck the wall. Posh made their final change on the hour mark with Ricky-Jade Jones replacing Marriott in attack.

Craig Forsyth blazed over at the back post following a centre from Ebosele on 62 minutes as Derby carved out a good opportunity in front of goal. Byrne headed wide of the target moments later before Thompson was back on the deck requiring treatment.

Jones was booked for a foul on the edge of the box on 69 minutes. The Rams thought they had opened the scoring on 70 minutes as the ball hit Plange, but the goal-line technology proved otherwise. Davies was cautioned for a similar foul on Jones at the other end.

As the game moved into six minutes of stoppage time, Derby got their noses in front as Louis SIBLEY fired a low shot, which skidded into the bottom corner.