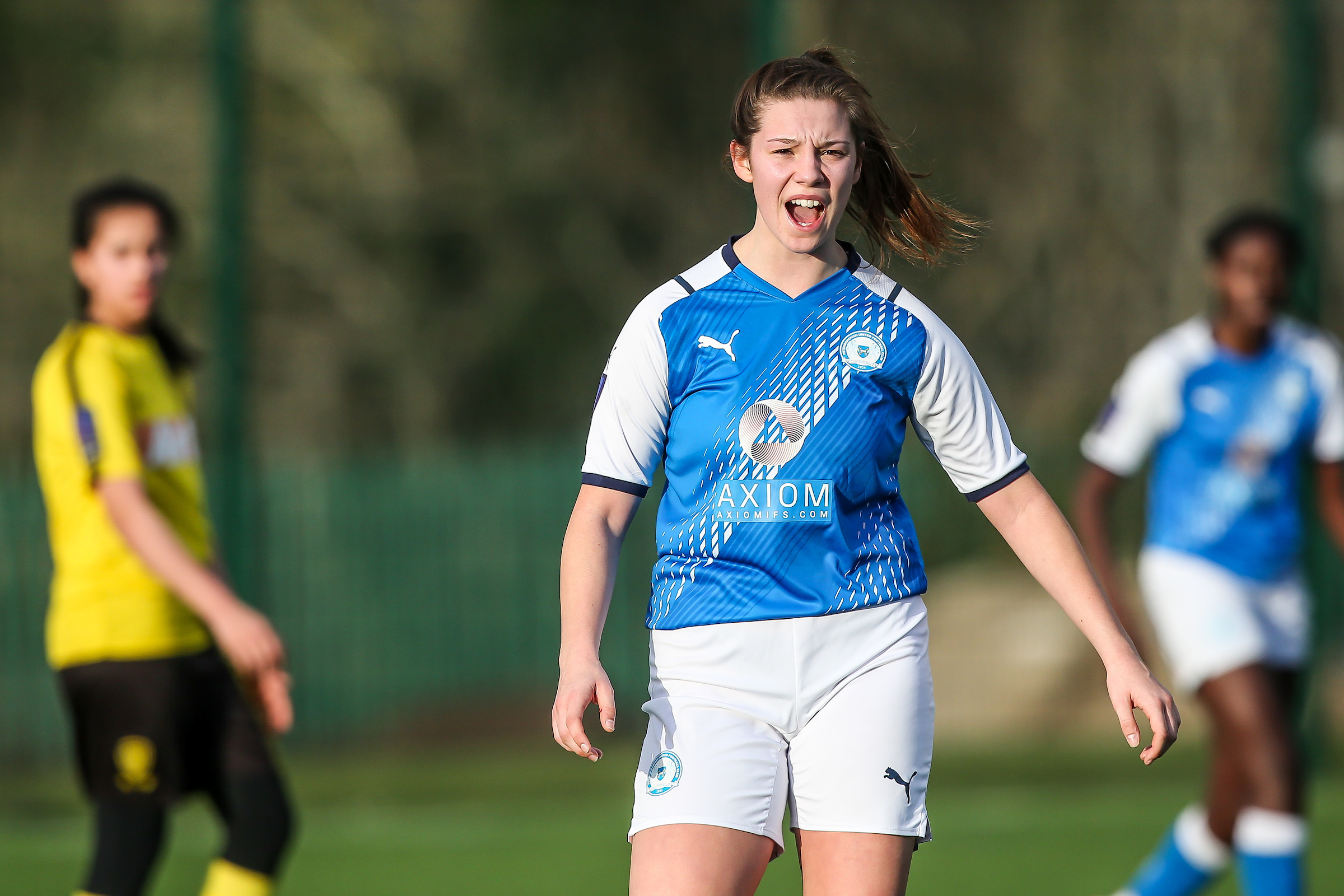 Midfielder Faith Horner is excited by the fixture with Hashtag United at the Weston Homes Stadium.

Midfielder Faith Horner is ‘counting down the days’ before stepping out at the Weston Homes Stadium and reflects on an injury-hampered opening few months at the club.

If you haven’t heard already, Peterborough United Women will entertain Hashtag United Women at the Weston Homes Stadium in the HerGameToo Cup on Friday 20th May, with the club working hard to attract a large crowd to celebrate the women’s game and the achievements of Dan Lawlor’s side this season in the FA Women’s National League.

It will be an experience that the majority of the squad are looking forward to, but no more for midfielder Faith Horner, who spent her younger years supporting The Posh and watching from the stands at the Weston Homes Stadium, and now the midfielder will have the opportunity to step foot on the hollow turf in just over a week's time.

“I’m honestly counting down the days, it will be an unreal opportunity for myself to hopefully play in front of a large crowd and on the pitch of a club I have supported since I was young. I've been a Posh fan from a young age and I remember my dad taking me to my first Posh game against Bournemouth, then the past few seasons I've had season tickets and tried to go to as many games as I could. So, for me, it’s a moment I have dreamt about and just wish we could get to that day sooner.

“It’ll be a great opportunity for people to come down and see how the women’s game is rapidly growing and they’ll be surprised by the quality that we have to show. It would top off a great campaign if we could get as many fans down there to support us as I believe the squad deserve the opportunity to play in front of a big crowd after an exceptional second half of the season.”

Horner joined Posh in January from Holwell Sports after the leicestershire-based club folded just before the Christmas break, with previous spells at local side Peterborough Northern Star. However, the midfielder's opening months at the club haven't been straight-forward, after making an instant impression in her opening five games, Horner suffered a lengthy injury that kept her out for over five weeks but is now looking forward to pushing on next season at the club.

“The injury just happened at the wrong time. I had started to show what I could do and established myself in the team, then the injury put me back five steps. It was difficult to regain momentum, but the situation was made easier as I already knew most of the team through Northern Star and Holwell.

"When I do reflect on my first few months at the club, I’ve really enjoyed it. We’ve put in some big performances and we achieved safety in the league, which was the main aim when I joined the club. Obviously, the only downside is I haven't been able to play as much as I would've liked because of the injury, but I was really glad to be back fit for the final few games of the season.

“Now, I can’t wait for next season for me personally to really kick on and try to excel in this league. We already have a very strong squad and have the potential to push for the top places next season, especially when you look back to beating Long Eaton and arguably should’ve beaten Lincoln, who are both one of the stronger teams in this league.”