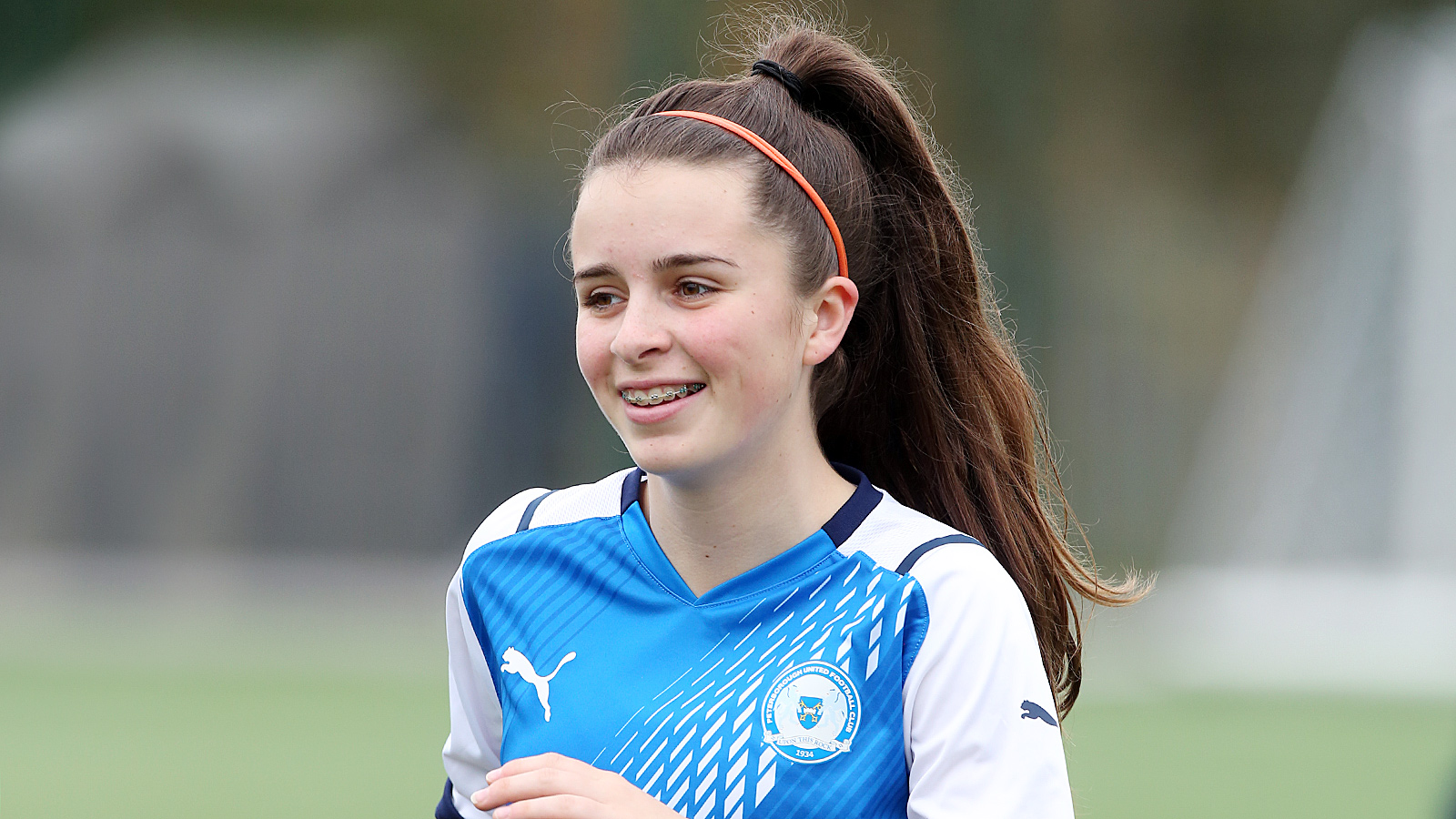 Hendrick another success story for the Posh Women player pathway.

Nicole Hendrick became the fifth reserve player to feature for Peterborough United Women first team this season after making her debut in the 5-0 victory over Wem Town Ladies on Sunday, following in the footsteps of Elloise Copson, Destiny Makanjuola, Milly Ramm and Neive Corry.

The club are aimed at creating a successful pathway for female footballers, helping develop and build a platform for the next generation of female players to progress into the first team, and are delighted to see the reserve players being given the opportunity once again this season.

Of the five reserve players to have featured for the Posh Women first team during the current campaign, Copson, at the age of 16 and have never played at senior level before, was promoted to the first-team squad at the beginning of the season and has gone onto make an impressive 15 appearances in the FA Women’s National League, becoming an influential part of the back line.

After impressing for the reserves in the first part of the 2021/22 campaign, Lawlor handed Makanjuola a permanent place in the squad while Ramm was called upon for two games just before the Christmas break and performed exceptionally well, grabbing an assist on her debut.

Hendrick, who has been at the club since the age of 8, became another player to progress through the pathway as she replaced Katie Steward in the second half of Sunday’s victory against Wem Town Ladies to make her debut for the first team after spending the last couple of weeks training with the first team.

The midfielder, who has made 19 appearances for the reserves in the East Midlands Women’s Regional Football League, spoke proudly of her achievement of featuring for the first team for first-ever time.

“Words couldn’t describe what I was feeling on Sunday,” Nicole said. “There has been a lot of work this season to reach this point, but to finally get to this stage was an immensely proud moment and an experience I won’t forget. I was quite shocked when I was told by Dan that I will be in the squad on Saturday morning, and it was quite a surreal moment to walk on the pitch in the second half to make my debut.”

“Having the chance to train with the first team in the last few weeks has helped me to meet people and build those relationships instead of being thrown straight into the squad without meeting anyone, that made Sunday slightly easier. Last weekend will be a moment I will remember fondly, but now is the time to keep pushing on and build ahead of pre-season next season.”

Hendrick joined the club at the under-8s section and has progressed through the foundation, and alongside playing for the reserves, she also features for the scholarship squad, who have produced a handful of players that have gone onto feature for the Posh Women, including defenders Niamh Connor and Makanjuola, and goalkeeper Neive Corry.

“I started at Posh at around the under-8s, going through the development centres and elite centres, to the scholarship and reserves this season. The support has been good, especially in the last couple of years, from the coaching on the pitch to the support off the pitch, and you get to meet new people as well.

“This season has shown that if you perform well for the reserves, then there’s a pathway into the first-team but then it’s up to you to take that opportunity and keep your place there. Seeing the likes of Elloise and the other scholarship players performing at the standard they have this season motivates you as a player to also reach that standard, also it shows if you work hard then the opportunity will come.

“This year has been tough, obviously playing in a higher division against more experienced and stronger players, but the challenges faced have helped me develop to the player I am now and has clearly paid off.”

Posh Women General Manager Bobby Copping said: “It is great to see another success story within our set-up, all the girls have shown that if you work hard enough and perform consistently, there is a pathway for progression into the senior side.

“It is brilliant for the girls coming through to know that there is a real pathway into first team football at the club and for them to see that the manager will trust them. I am excited to see who our next success story will be as we have some top talent coming through.”