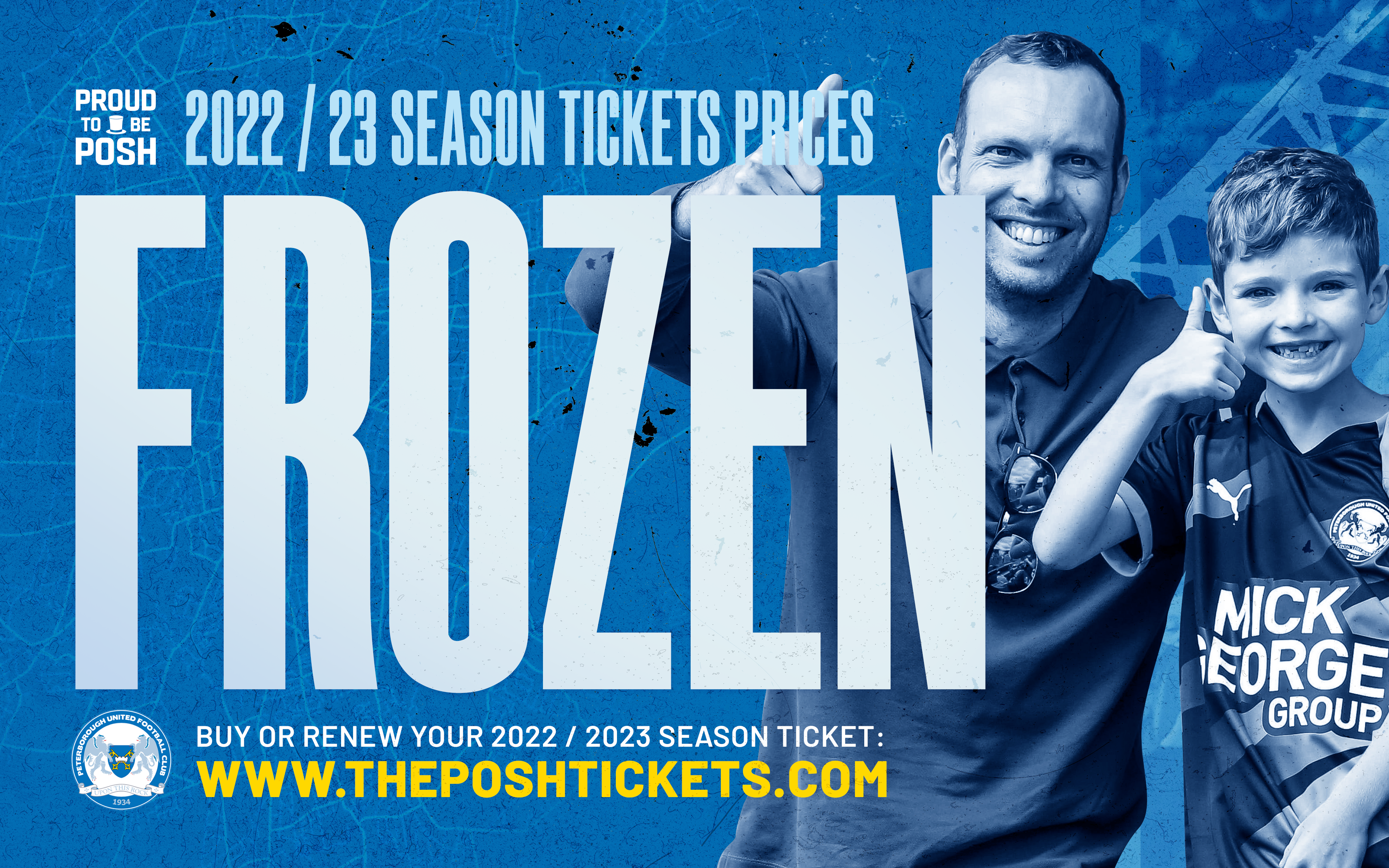 In a world where energy prices are soaring, filling up your car with petrol is a challenge, creating the perfect meal is an expensive necessity, taxes are rising and even Netflix and Chill isn’t as attractive as it once was, it is rare to find an industry where prices are not going in one direction.

However, here at Peterborough United, the five-letter word (Wordle) of the day, is FROZE.  The football club are pleased to confirm that season ticket prices for the 2022-2023 campaign have been FROZEN. This means the early bird discount price will be exactly the same as the 2021-2022 price when Posh were pushing for promotion and by purchasing in this period, you will make a saving of up to £50.

Over the last 12 months, the club have been listening to you, the supporters, and as a consequence of feedback, we have introduced an under 24 price class, replacing the under 22 concession, recognising that younger supporters in the current climate often struggle in their early 20s with finances after leaving full-time education.

Not only that, but the club have ensured that the early bird discount period covers two pay-days, and we are also happy to confirm that the Finance option is again available for supporters, allowing you to spread your payment over several months.

"I believe the introduction of an under 24 price class is an important addition and we were keen to allow supporters two pay windows to help secure their seat for the 2022-2023 campaign.
David Paton - CEO

To continue our commitment to the Fans of the Future, we are once again offering under 12s a FREE season ticket when accompanied by a paying adult. The club are also putting into place a number of initiatives, which will benefit the wider community and demonstrate our unwavering determination to increase the next generation of Posh fans.

Chief Executive David Paton said: “When we had the discussion with the co-owners and key personnel at the club, it was important that we recognised the sacrifices that supporters have made over the last 18 months, following Covid-19 and the continued challenges around the cost of living. Whilst we are no different as a football club, it was imperative for us that we got the balance right moving forward. Our Emirates FA Cup fifth round tie against Manchester City, which was wonderfully supported by the city of Peterborough with a sell-out crowd, has allowed us to delay putting these season tickets on sale.

“A lot of clubs within the EFL have raised their prices in line with inflation, however, when we had the discussions, we all agreed that freezing the prices was the preferred option. When I learned about the donations that supporters had made to the club during the pandemic and prior to my arrival as CEO, one of the key discussions was about making sure that we demonstrated our appreciation for their loyal support.

“I believe the introduction of an under 24 price class is an important addition and we were keen to allow supporters two pay windows to help secure their seat for the 2022-2023 campaign. We are already in discussions with ARU (the university) about potential ticketing incentives and have many others things in the pipeline, which I believe will be well received.”

“I have been at this football club since the beginning of the year and have been enthused by the passion and commitment of the fan-base. I have taken the time to get to know as many of you as possible and one thing that comes over loud and clear is your unwavering support of this football club.

For all of the information on season tickets, including prices and how to buy, click here.

IN PERSON
Visit the stadium ticket office during opening hours.

TELEPHONE
Call our Ticket Office on 01733 865674 during normal opening hours.