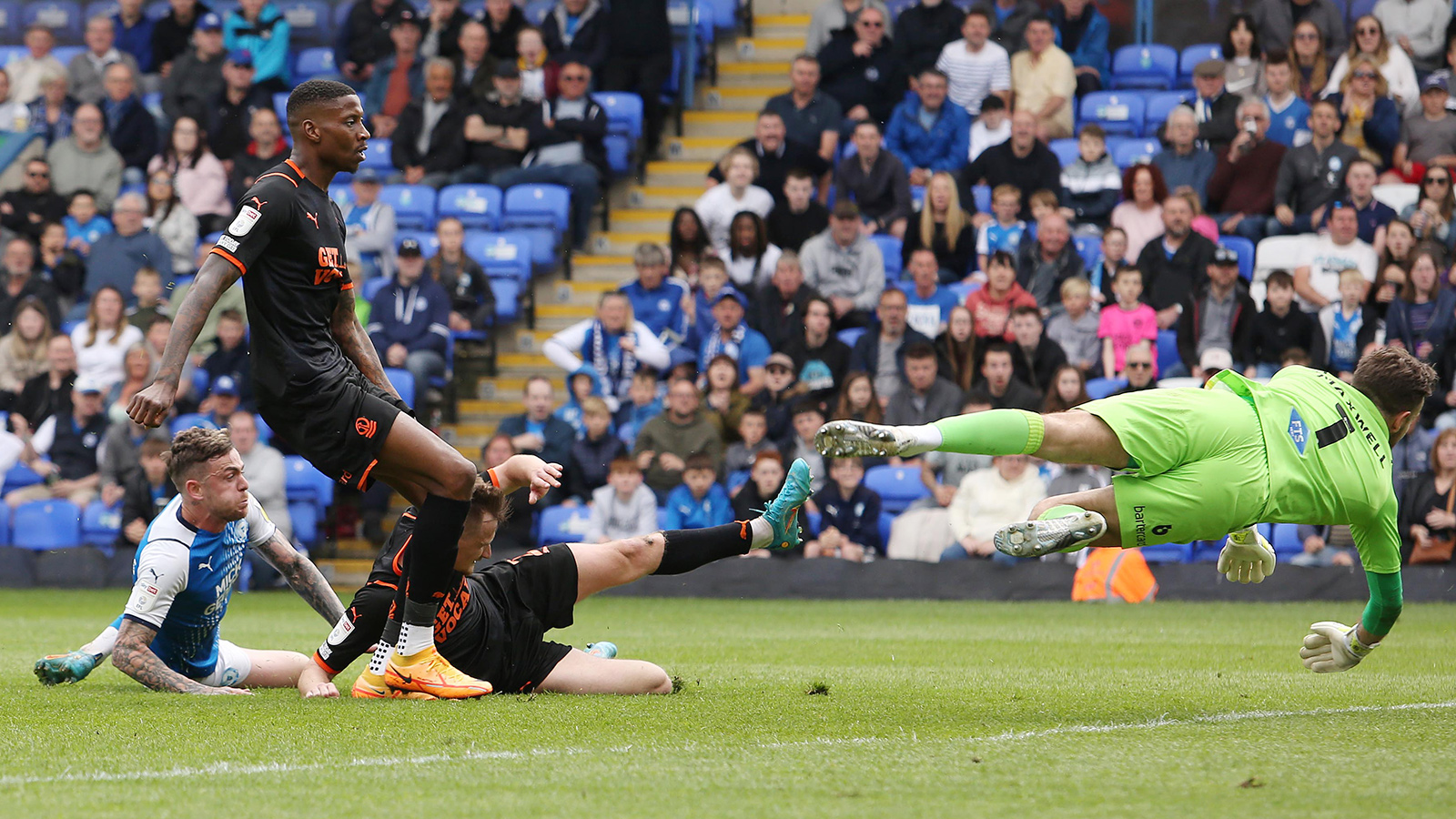 Posh finished the Sky Bet Championship campaign with an emphatic 5-0 victory over Blackpool.

The Goal of the Season award was presented prior to kick-off, but when the final whistle was sounded by referee Andy Woolmer, officials were reflecting whether they were premature with the results of the vote as Grant McCann’s men scored some superb goals to claim a final day victory over Blackpool.

Jack Taylor tested the reflexes of goalkeeper Chris Maxwell inside the opening few minutes in the spring sunshine as Grant McCann’s men made a positive start against the Seasiders. Jones showed his turn of pace to create a shooting opportunity for Harrison Burrows on eight minutes, but he dragged his shot wide of the far post.

Jones tested Maxwell again after another forceful run moments later, the keeper doing well to keep the effort out despite being wrong-footed. Clarke-Harris tested Maxwell with a header on 14 minutes after a deep cross from Burrows.

Luke Garbutt saw a free-kick gathered by Cornell on 20 minutes after Burrows was penalised for a foul on the lively CJ Hamilton. Joe Ward was cautioned by referee Andy Woolmer for a foul on Dale moments later.

Maxwell produced a fine stop to keep out a looping Taylor header on 23 minutes after excellent approach play from Poku and Jones. Szmodics saw a shot kept out by Maxwell at the near post three minutes later after the former Colchester man tried to squeeze the ball home from a tight angle.

Poku was the next to try his luck, but his drive from distance went wide of the near post. The home side were forced into a change on 33 minutes with Keogh limping out of the action to be replaced by Ekpiteta.

On 35 minutes, Posh opened the scoring as a sublime pass from Poku sent CLARKE-HARRIS away, he rounded the keeper, took a touch and found the back of the net for his 12th goal of the campaign. Connolly couldn’t quite direct an effort on target on the stretch on 39 minutes as Blackpool kept a second ball alive following a half-cleared corner.

Posh were forced into a change as the first half moved into stoppage time with Fuchs limping off to be replaced by Jorge Grant. Poku showed excellent ability with the ball at his feet on 52 minutes to leave his opponent on the deck, but his right-foot shot went over the crossbar.

Posh doubled the lead on 62 minutes and it was a superb goal, a wonderful pass from Jones and a clinical finish from SZMODICS with his left-foot.  Carey fizzed a right-foot shot from 25-yards just wide of the target as the visitors tried to get back into the contest.

It was 3-0 on 69 minutes and the goal of the game, a wonderful team move finished off from close-range by SZMODICS after a delicious low centre from Burrows.  McCann made a double change with 15 minutes to play as Joel Randall and Jack Marriott were introduced.

On 84 minutes, Posh made it 4-0 and it was another superb goal, a wonderful ping from Grant to Burrows, he took a touch and delivered a pinpoint centre for substitute Jack MARRIOTT and he guided the ball home on the volley.

Posh made it 5-0 in stoppage time and it was arguably the goal of the game, Jack TAYLOR firing an unstoppable shot from 25-yards into the top corner.