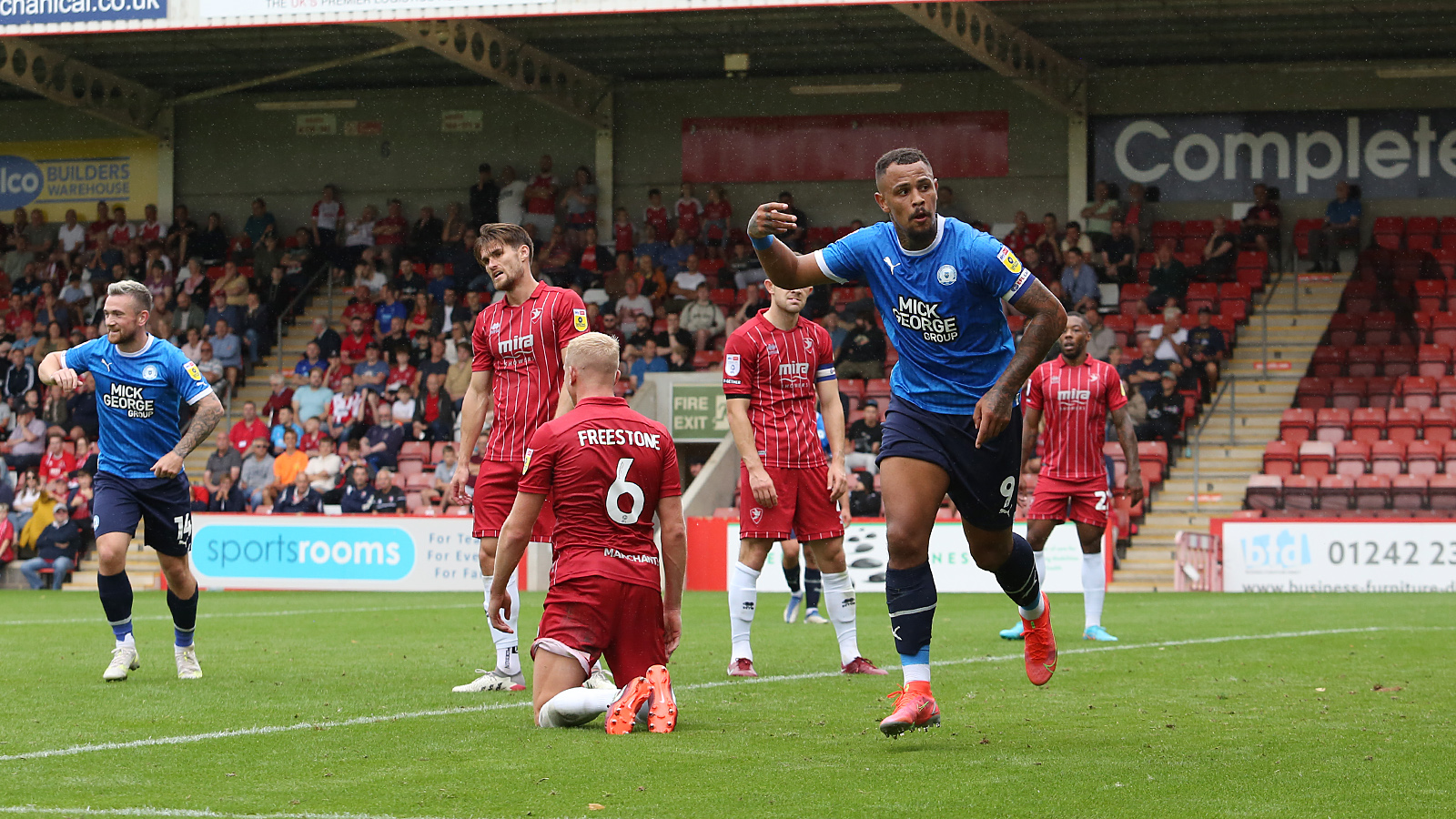 Jonson Clarke-Harris scored twice as Posh came from 2-0 down to beat Cheltenham Town 3-2 at the Completely-Suzuki Stadium.

Jonson Clarke-Harris tested the reflexes of goalkeeper Luke Southwood on 13 minutes, but the on-loan Reading shot-stopper did well to repel his effort, beating the ball to safety. Moments later, the hosts had a chance of their own and a better one too, Perry afforded too much room in the box, but he lashed his shot inches wide of the near post.

Lewis Freestone, an Academy graduate of the Posh, fired a shot across goal for the hosts before two more Academy graduates, Harrison Burrows and Ricky-Jade Jones linked up, but the latter’s header went over the crossbar.

Jones displayed his pace on 21 minutes down the right, bursting into the penalty area, but from a tight angle, he fired well wide of the near post. The hosts got their noses in front just before the half hour mark as the strength and power of Dan Nlundulu caused all sorts of problems for the Posh back-line and his centre was bundled into his own net by Frankie Kent.

The hosts doubled their lead on 38 minutes and it was a terrible defensive error that led to the goal, Alfie MAY benefitting from a poor pass and rounding Bergström before slotting into the empty net. Posh had an immediate chance to get back into the game as Bergström’s long clearance found Clarke-Harris, but his left-footed lob struck the top of the crossbar. Bergström produced a superb stop with his legs to keep out May three minutes before the break as Cheltenham threatened to run away with it.

As the first half moved into two minutes of added time, Jeando Fuchs became the first player to go in the book for a shirt tug on Sercombe. Grant McCann made a triple change at the break with Joe Ward, Ben Thompson and Jack Marriott replacing Fuchs, Jones and Randall.

Jackson was cautioned for kicking the ball away moments into the second period. Kent could and perhaps should have done a little better from a deep Joe Ward free-kick, the centre back saw his effort directed straight into the grateful arms of Southwood.

Posh pulled a goal back on 58 minutes as two substitutes combined, Joe Ward with a good low delivery and Jack MARRIOTT is there to get across his man at the near post to find the back of the net. Kent was cautioned by referee Tom Nield on the hour mark with Perry curling the resulting free-kick over the bar.

Bergström produced a good stop with his legs to deny May for the second time in the contest on 64 minutes after he managed to ghost in behind Kent. Posh drew themselves level on 66 minutes as Jonson CLARKE-HARRIS rifled home with his left-foot after a poor defensive clearance.

Burrows sliced a shot wide of the near post after a good run from Knight on the near side as Posh tried to get a quickfire third. Posh completed the turnaround on 72 minutes as Ward delivered another wonderful centre for CLARKE-HARRIS to guide home at the near post for his second goal of the game.

Lucas Bergström then produced a stunning save to tip over an effort from Alfie May to preserve the Posh lead. McCann made a fourth change midway through the first half with Hector Kyprianou replacing Szmodics.

Ward had a good chance to cap a fine second half performance on 85 minutes as he raced onto a Kyprianou pass, but he lofted his effort over the bar. Ward curled a free-kick straight at Southwood on 87 minutes as Freestone was cautioned for a lunge at the same player.