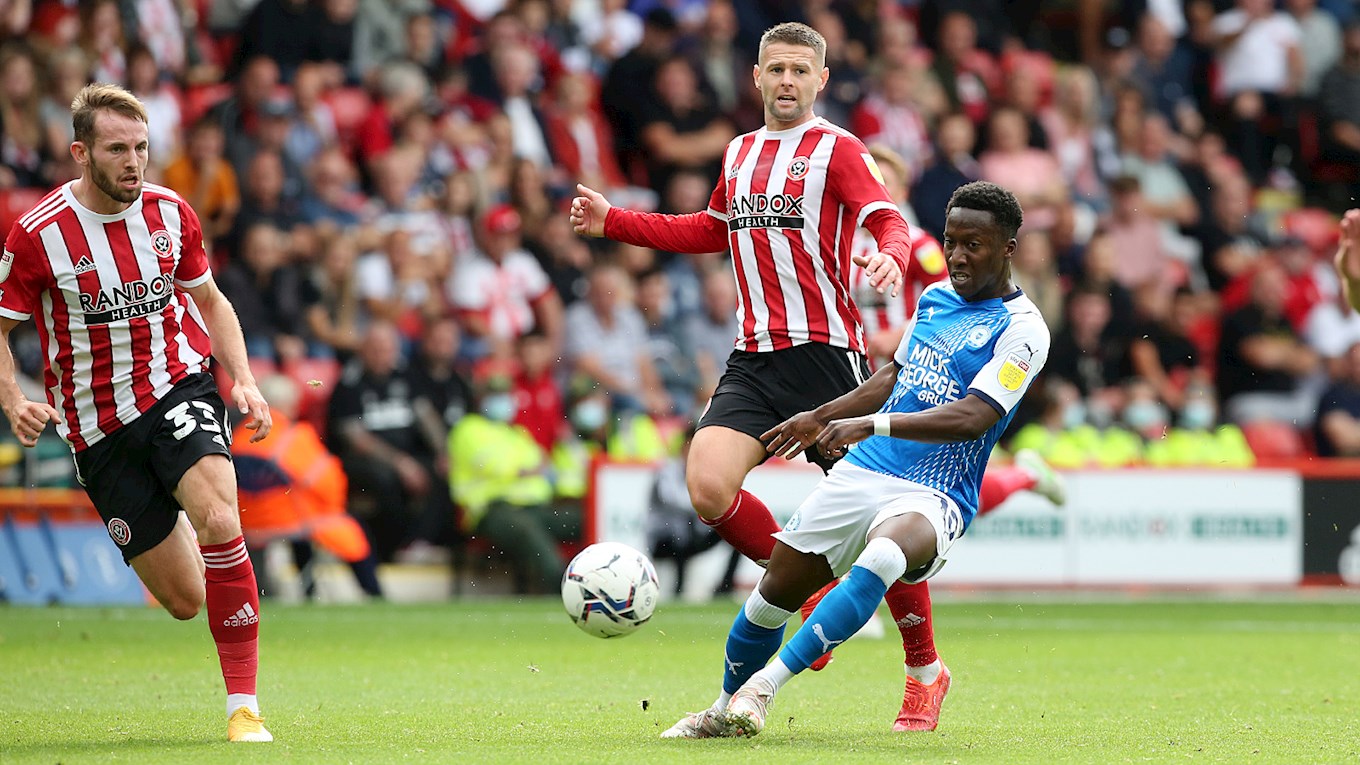 Sheffield United were rampant at Bramall Lane as Posh beaten 6-2 by side recently relegated from the Premier League.

Peterborough United were blown away by a rampant Sheffield United side in the second half at Bramall Lane as the hosts scored five times to complete a 6-2 success with Jack Marriott and Jonson Clarke-Harris on target for Darren Ferguson’s men.

The hosts opened the scoring on the quarter hour mark as Illman NDIAYE swept home a cut back from the right past goalkeeper Christy Pym. Experienced front man Billy Sharp sent a shot wide on the turn moments later as the Blades, buoyed by that goal, piled the pressure on.

Pym was well placed to keep out a drive from Norwood on 31 minutes as the home side continued to dominate. Josh Knight and Siriki Dembele linked well on 35 minutes with the former getting into the box, his cut-back just eluded both Marriott and the onrushing Sammie Szmodics.

On 39 minutes, Posh drew themselves level as Jack MARRIOTT hassled the Blades defender John Egan and drilled a low shot past Foderingham for his first goal back in a Posh shirt. Egan headed a Fleck free-kick wide of the target in first half injury time before the referee brought an end to proceedings.

Burrows was denied by Foderingham moments after the re-start after Dembele and Marriott combined well. Posh had a glorious chance on 48 minutes as the ball fell at the feet of Marriott following a deflected Burrows effort, but he saw his shot twice saved by Foderingham. Burrows then went down but he was booked for apparent simulation.

The hosts regained the lead on 50 minutes as a poor pass out from the back from skipper Kent was intercepted, a quick one-two and FLECK is there to side-foot past Pym and into the far corner. The Blades extended their advantage within two minutes as another slick move ended with Sharp’s low cross turned in at the near post by OSBORN.

Gibbs-White was superbly denied by Pym on 55 minutes as the Blades came close to a fourth during a rampant spell. Darren Ferguson made a change just after the hour mark with Jack Taylor replacing Norburn in midfield.

It was 4-1 to the rampant hosts on 68 minutes as Wolverhampton Wanderers loanee Morgan GIBBS-WHITE rifled an unstoppable shot into the top corner after neat interplay around the Posh box. It was 5-1 on 69 minutes as NDIAYE somehow managed to arch his head to get the ball into the corner.

A shell-shocked Posh made a double change on 71 minutes with Jonson Clarke-Harris and Jorge Grant replacing Marriott and Szmodics. Posh pulled a goal back on 78 minutes as CLARKE-HARRIS won a spot-kick and then slotted it straight down the middle to reduce the arrears.

Freeman fired over the bar from the edge of the box on 81 minutes as the Blades again broke at pace. Deep into stoppage time, the Blades made it six as OSBORN fired into the roof of the net following a slick one-two.