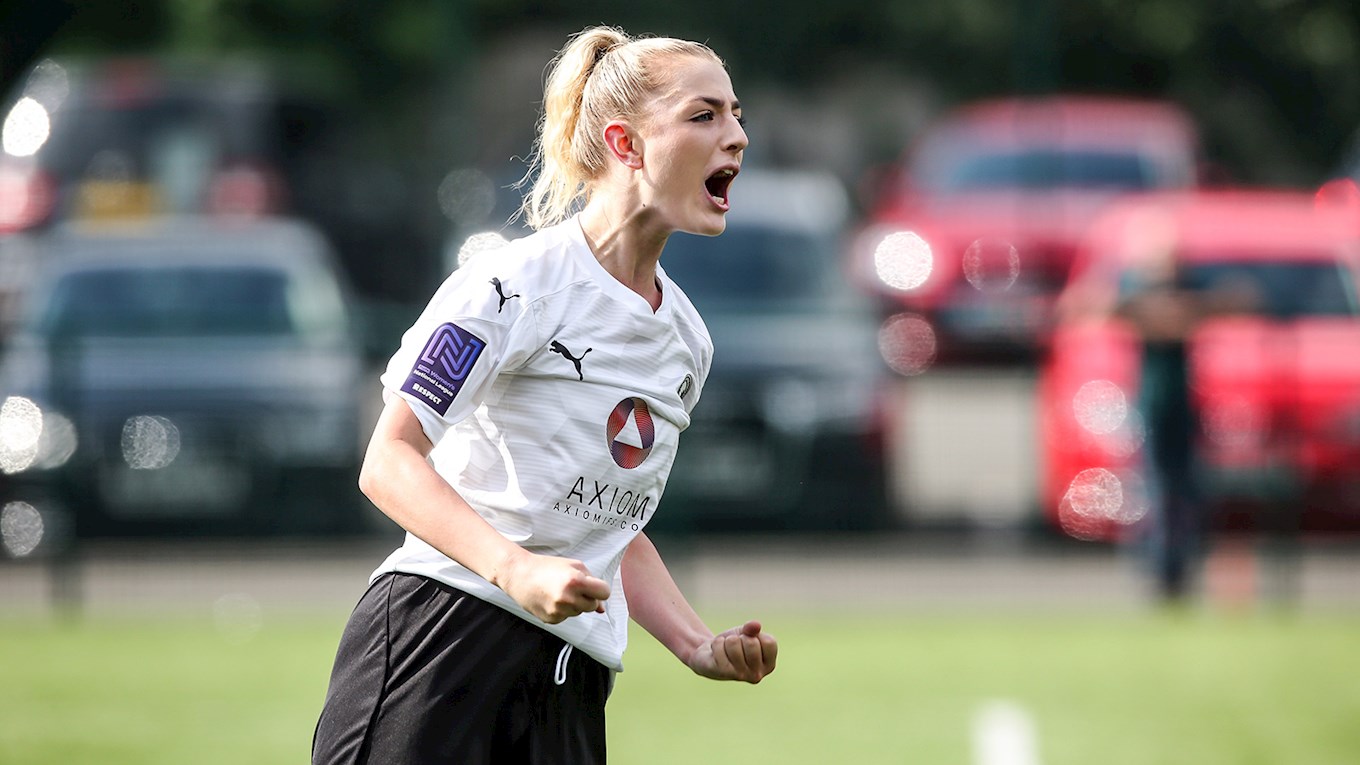 Perkins treble inspired The Women into First Round Proper of FA Cup after overcoming a spirited Dronfield Town Ladies.

Peterborough United Women sealed their place in the FA Cup first round proper after a mature and professional performance over Dronfield Town Ladies at HE Barnes Stadium in the third qualifying round, with Keir Perkins grabbing a second hat-trick in two games.

It was the perfect start for Posh, and after grabbing her second hat-trick of the season last week in the Northants County Cup, Keir Perkins opened the scoring on four minutes. The ball was worked out wide to Hipwell, who played in Perkins through on-goal and her right-footed shot found the bottom corner.

Posh continued to threaten as Megan Parrett's effort from the edge of the box failed to test the keeper. Perkins then saw a long-range shot rattle the crossbar on 10 minutes.

Perkins turned provider on 20 minutes after some brilliant hold-up play before setting Steward on goal, who skipped the ball around the keeper but went too wide and found the side-netting.

However, on 23 minutes, Dronfield Town drew the game level after Katie Cooper clearance was intercepted and allowed their number 9 to carry the ball forward, who saw their initial shot saved, but the rebound was converted home.

Being the underdogs, it could have inspired the hosts to grow more into the game, but Posh did brilliantly to regain control of the game. Just after the half an hour mark, Niamh Connor surged forward from the left-hand side into the opponent's box, picking out Perkins, and she drifted her effort wide of the post.

That didn’t ruin Perkins rhythm though, and just four minutes later, she had her second and reinstated Posh lea. It was just like the first goal, as Hipwell slipped In Perkins, who cooly slotted past the keeper.

Moments before half-time, Posh extended their advantage to two goals when Niamh Connor forced the ball over the line after Stacey McConville flicked Hipwell’s corner to the back-post.

Posh concentration levels didn't drop at the break, with Parrett's curling effort rising over the bar. However, on 49 minutes, Perkins sealed her second hat-trick in a week after Steward’s low-cross presented the number nine with a simple finish from close-range.

It could and should have been a fourth for Perkins shortly after, who raced through one-on-one with the keeper, but she couldn’t keep her shot down. Steward then saw her first-time volley on the edge of the box easily gathered by the keeper.

On 60 minutes, Posh grabbed their fifth of the afternoon after Hipwell showed great strength to hold off the defender and raced into the box, firing her effort past the keeper at the near post. On 64 minutes, Posh made a double change as Hipwell and Elizabeth Santiago replaced Ellen Marson and Megan Breakwell.

The hosts created their first opportunity of the half when Kerryn Copeland misjudged a bounce, allowing Dronfield Town’s number 9 to break through on-goal, but Cooper was out quickly to smother the ball.

Minutes, Parrett extended Posh advantage to five, who was played through and calmly slotted the ball past the keeper to open her account for the day. But, against the run of play, Dronfield Town pulled a goal back after their number 9 fired an effort into the bottom corner.

It was an instant reply from Posh and the goal of the match from Marson, who received the ball just inside the box and fired a looping shot over the keeper and into the top corner.

On 77 minutes, Chloe Brown made her final change of the afternoon, as Emma Stevenson replaced Jess Driscoll. Steward had the ball in the back of the net, but was disallowed for offside.

Perkins continued to search for her fourth of the game, presented nicely with an opportunity after Marson’s pass, but she drifted her shot away from the far-post. However, Parrett grabbed her second and Posh eighth, as Steward burst into the box and picked out Parrett to tap home from close range.

On 87 minutes, Perkins had her fourth after Parrett’s low cross was poked home by the captain. Shortly after, Posh hit double-digits for a consecutive week, with Steward grabbing the goal her performance rightly deserved after she converted Parrett’s cross to seal Posh progression into the first round proper for first-time in their history.

The reserves fell to a 7-1 defeat against Oadby & Wingston Grils FC in their East Midlands Womens Regional Football League on Sunday afternoon. Larissa Federick grabbed the only goal of the game for Posh.