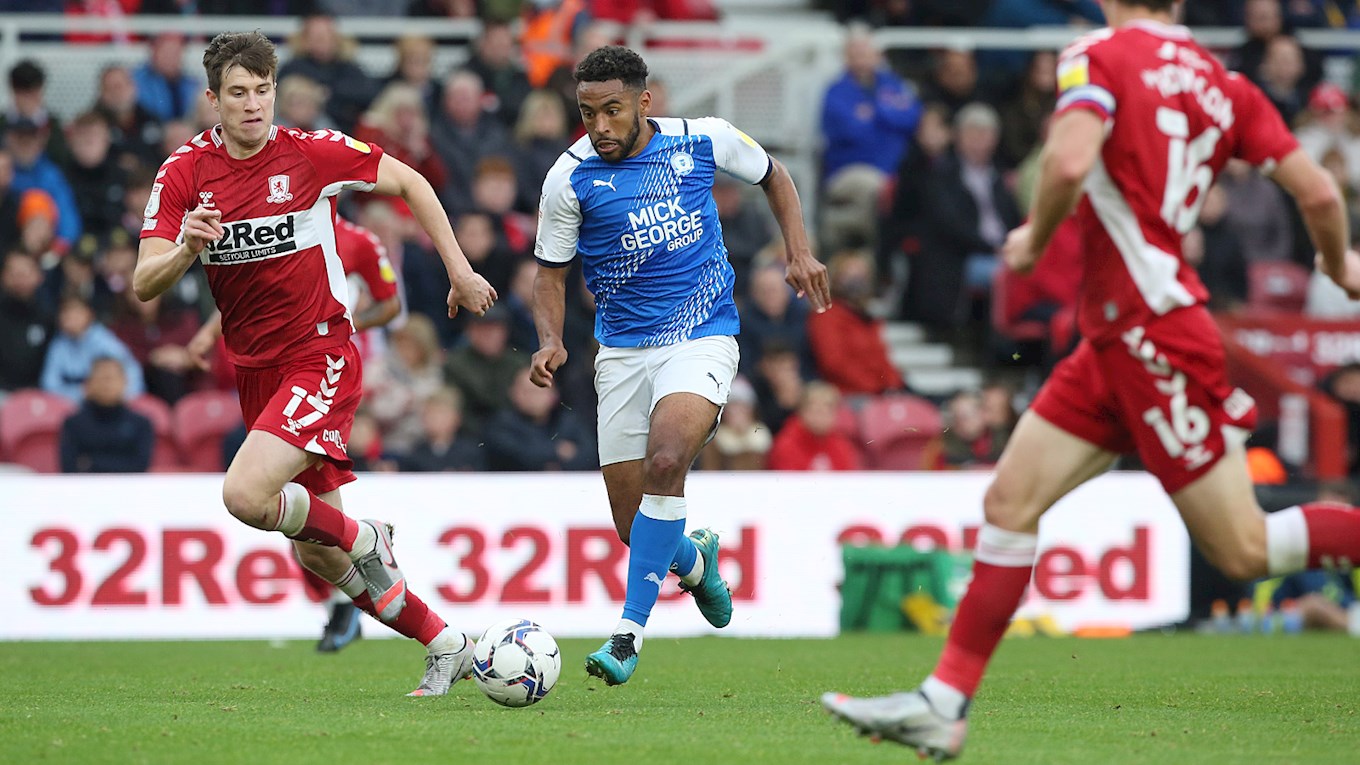 Match report for Middlesbrough vs Peterborough United on 16 Oct 21

A tale of two penalties as Posh suffer 2-0 defeat to Middlesbrough at the Riverside Stadium.

When you are struggling to create opportunities in open play, the chance to convert from the spot is an appealing prospect, so the decision not to give a spot-kick when Siriki Dembele was clearly upended by Middlesbrough goalkeeper Joe Lumley was a key one in the afternoon on Teeside.

Yes, the penalty might not have been converted, and yes it is hard to predict what might have happened at 1-0 against a side who were struggling themselves to create, but with referee John Busby waving away the protests, it allowed the hosts to take advantage, securing a spot-kick of their own and then finding a second deep in stoppage time.

It was a bright start to the contest at the Riverside Stadium with Sammie Szmodics seeing a low cross-shot blocked while at the other end Payero headed wide from a left-wing centre before McNair fired well over the top from long-range.

Siriki Dembele was on the wrong end of a bad tackle from Howson on 13 minutes, however referee John Busby didn’t give a free-kick with the more pressing concern the fitness of Dembele who was down for a prolonged period receiving treatment from physiotherapist Matt Rogers.

Jack Taylor was cautioned by referee John Busby for a shirt pull on 22 minutes and it was one of the officials who meant there was another hold-up on 26 minutes as the assistant reported an injury and had to be replaced by the fourth official.

Ronnie Edwards was the next man in the book for a push on 34 minutes as a long ball found some space behind the Posh back-line. Jorge Grant headed a Szmodics cross over the top moments later after patient play down the left-hand side from Posh.

Cornell was well placed to keep out a low drive from Tavernier on 41 minutes after he cut inside onto his left-foot. Payero was cautioned for a foul on Taylor as the first half moved into six minutes of added time.

In the final minute of stoppage time, Knight did superbly well to get back on the line to clear from Hernandez after he had skipped inside Knight. Posh should have been given a spot-kick on 48 minutes as Dembele is clearly upended in the box by the keeper, but the referee gave a corner kick to the anger of the supporters in close proximity.

Szmodics was cautioned for a foul moments later, perhaps more in frustration than anything else. Tavernier drilled a shot wide of the near post on 50 minutes after cutting inside onto his left-foot.

Sporar flashed a cross-shot across the box on 55 minutes with the flying Watmore not far away from making a connection in the six-yard box. Ikpeazu nodded a cross over with his head on 66 minutes as Boro made headway down their right hand side.

Cornell did well to keep hold of a fizzing effort from Hernandez on 75 minutes as Posh made a change with Joe Ward replacing Dembele. The home side were awarded a spot-kick on 84 minutes as the referee spotted tussling in the box involving Beevers and Thompson on Bamba and Ikpeazu. MCNAIR stepped up and set Cornell the wrong way from the spot.

The visitors grabbed a second deep into stoppage time as substitute CORBURN swept home from six-yards.