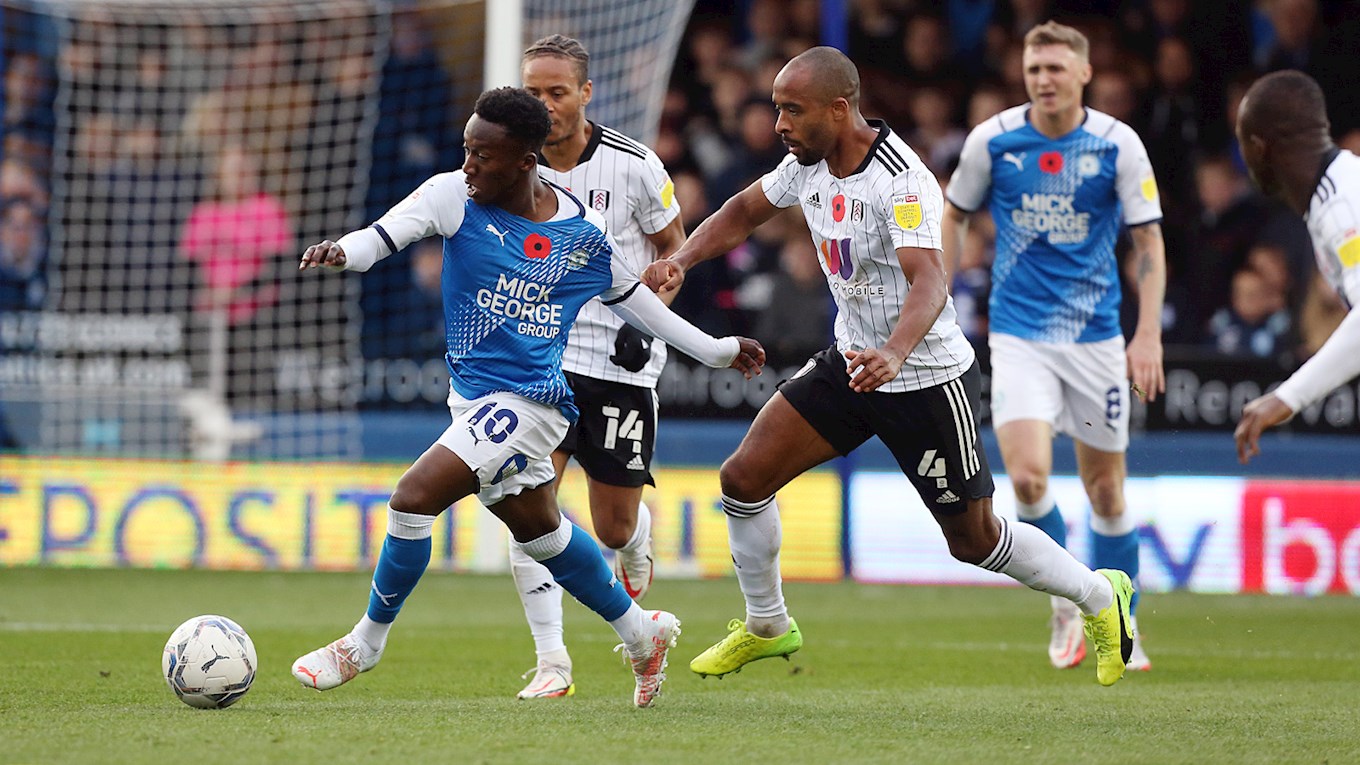 Match report for Peterborough United vs Fulham on 06 Nov 21

Posh put in good performance but were beaten 1-0 by Fulham at the Weston Homes Stadium.

Peterborough United put in another excellent display at the Weston Homes Stadium, but a header from Serbian international Aleksander Mitrovic earned in-form Fulham all three points to condemn Darren Ferguson’s men to a 1-0 defeat.

The visitors enjoyed the majority of possession as you would perhaps expect in the opening 10 minutes with Dai Cornell doing well to keep out a cross-shot from Harrison Reed at the near post. Odoi was cautioned for a foul on Dembele on 33 minutes by referee Dean Whitestone.

Moments later, Posh were inches away from breaking the deadlock as Jonson Clarke-Harris toe-poked the ball towards goal, the ball crashing against the angle of post and crossbar before going out of play.

Szmodics was denied by Rodak after linking well with the lively Clarke-Harris before the latter won a free-kick in a decent position on 38 minutes. From the resulting free-kick, Ward was superbly denied by Rodak as Posh continued to pile on the pressure.

In first half injury time, Kebano fired wide of the near post after making an intelligent run from left to right. Fulham made a change at the break as Kenny Tete replaced Odoi who was booked in the first period.

Dai Cornell atoned for a poor clearance with a good stop from a snap-shot by Mitrovic on 52 minutes. Moments later, the two locked horns again, this time the goalkeeper producing a good reaction stop to keep out the Serbian’s volley.

Reid curled a shot over the top on 68 minutes after a clever lay-off from Harry Wilson. Rodak did well to keep out Szmodics moments later after a good ball over the top from Norburn. Reid then had a great chance to break the deadlock for the Cottagers, but he lashed his shot wide from just inside the penalty area.

Fulham opened the scoring on 74 minutes and it was no surprise that it was MITROVIC who found the back of the net, guiding his header past Cornell after a Kebano assist. It was the Serbian’s 20th goal of the campaign.

Darren Ferguson made his first change on 78 minutes with Ronnie Edwards replacing skipper Beevers. Posh were a whisker away from a leveller on 82 minutes as Dembele found Clarke-Harris, he drifted past the defender, but cracked his right-foot shot against the post.

The Posh number nine fired wide of the near post as Fulham struggled to clear a corner kick from Butler. Norburn was cautioned in stoppage time for a foul as the fourth official indicated four minutes of additional time. Clarke-Harris was expertly denied by Rodak right at the death before the referee brought an end to proceedings.