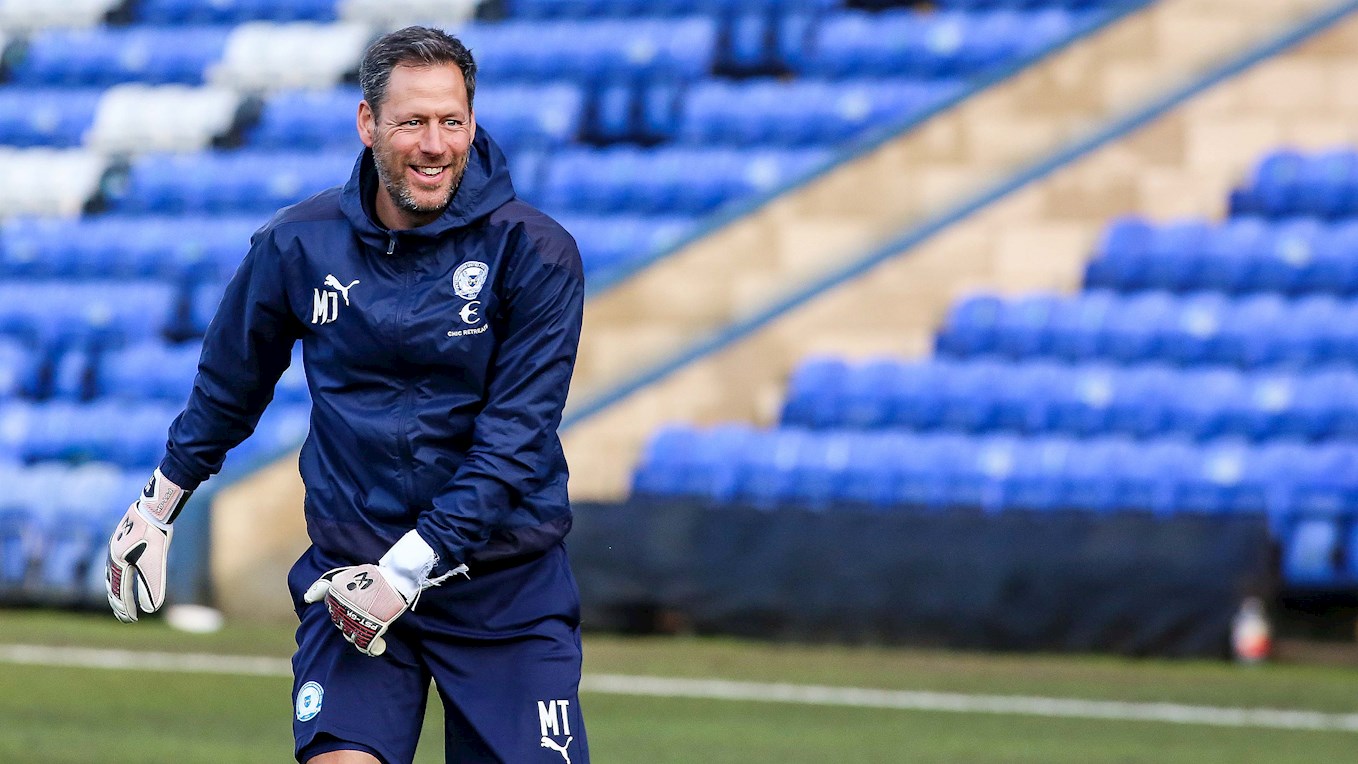 Long-serving goalkeeper Mark Tyler has hung up his gloves after a superb career spanning over 20 years.

Mark Tyler has been putting off the ‘R’ word for a number of seasons, but at the age of 44 and following promotion to the Sky Bet Championship at the weekend, he believes it is the perfect time to officially hang up the gloves and concentrate solely on the coaching role he has at the Weston Homes Stadium.

Tyler, who has been the club’s Goalkeeping Coach since May 2017, is second in Peterborough United’s all-time appearance list behind Tommy Robson. He believes he has reached the 500 mark and who are we to argue, even though those who deal in statistics believe he is on 494.

He kept 128 clean sheets for the club and also played for Luton Town and Bury during his career, which included success at Wembley Stadium in 2000 for Barry Fry’s Posh side, the shutout against Darlington helping to secure promotion.

He made his Posh debut in a televised match against Birmingham City in 1994 with his last appearance coming in March 2017 in a 1-1 draw with Oldham Athletic. He was an unused substitute on a couple of occasions last term.

“I am officially hanging the gloves up. I have had a great career, but now is the right time to retire from playing. It is a good time to make the decision, go out on a high and look forward to the future, the next chapter of my career as a Goalkeeping Coach, something that I am really enjoying.

“The two games I was on the bench, the few days training that I did ahead of those fixtures, it took me two or three days to recover. My body is telling me that it is time to relax a bit more now. It is always a hard decision because I have stayed fit and healthy and I know I can still play, but I am getting older and wiser and the time feels right.

“When I first started out in my career, all I wanted to do was to play one game so to look back on a career of 500 odd appearances for Peterborough United and over 800 in total, I know I have had a good time. To be second on the all-time appearance list of this club behind the late, great Tommy Robson is a great honour. I am sure he is probably up there cheering that I have made this decision so I didn’t get any closer!

“I have enjoyed it immensely and there have been a lot of highs along the way. Getting promoted at Wembley was special, the success I enjoyed at Luton was great and I am probably only a handful of players to get a 10/10 from Alan Swann (for his performance at Oldham Athletic in the FA Cup).

“I am looking forward to the future now, working with the goalkeepers that we have at the football club. It was nice to see Will Blackmore get minutes on the pitch on Sunday, we have a lot of faith in him, he has just got his new contract and he is improving all of the time. Christy has been superb since he joined the club and I enjoyed working with Josef, he was only here a short period of time, but what an impact he made, not just the penalty save at Charlton, but the big saves he made against Doncaster Rovers. I have no doubt he will go on and have a great career and I expect him to be number one at Stoke next season,” Tyler said.

Posh boss Darren Ferguson added: “Mark was a great player over such a long period of time, but I, like he, believes now is the right time to retire and fully concentrate on his coaching career.”