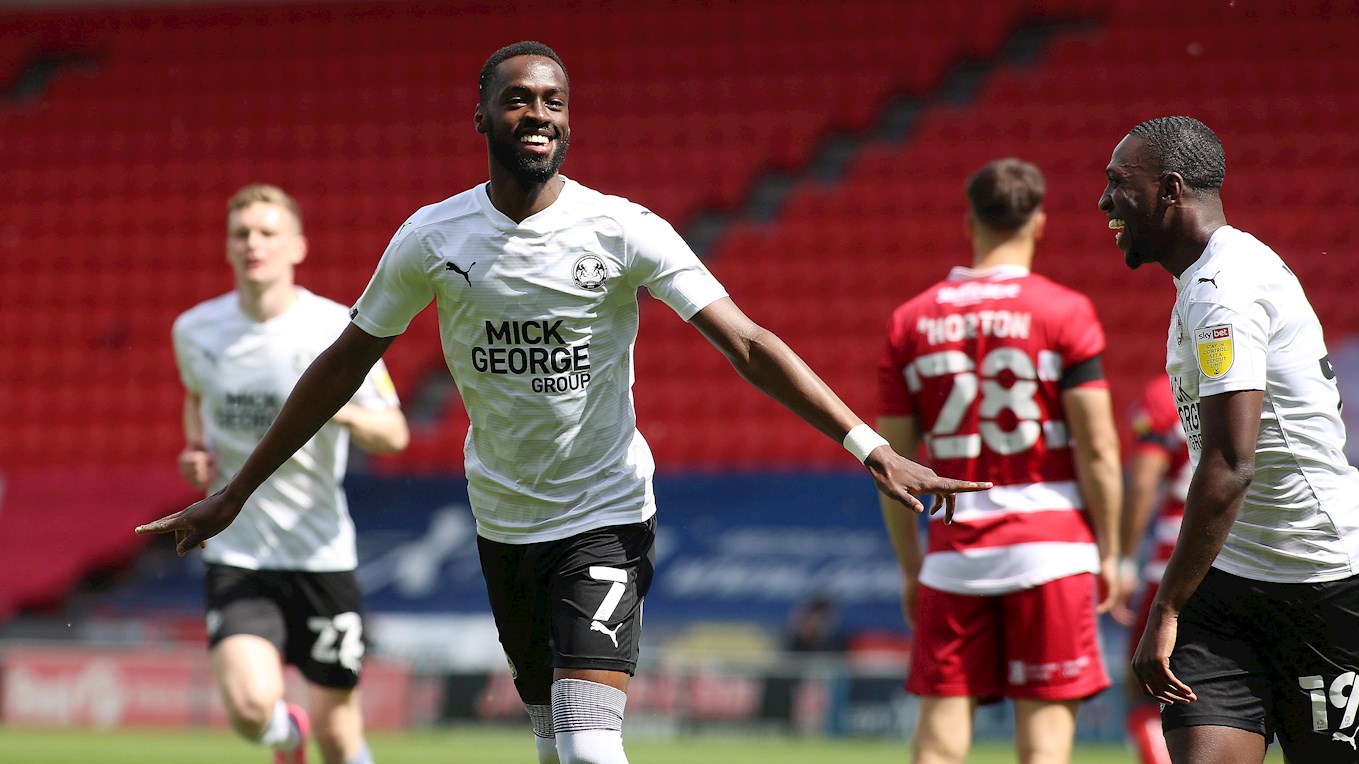 Peterborough United concluded their Sky Bet League One campaign with a thumping 4-1 victory at Doncaster Rovers with all four goals coming in a devastating first half at the Keepmoat Stadium.

Ethan Hamilton tested goalkeeper Louis Jones with a stinging drive on three minutes after a bright start from Posh, the keeper doing well to tip over for a corner kick. The goal that was coming did arrive on five minutes and it was a stunning strike from Mo EISA, he collected a pass from Louis Reed, turned and fired an unstoppable drive past Jones and into the back of the net.

It was the 100th goal in all competitions for Darren Ferguson’s men but moments later it was 101 as an in-swinging free-kick from Joe Ward was met by Niall MASON for his second goal of the campaign.

Pym produced a sharp stop to keep out John-Jules on 13 minutes as he found some space in the penalty area as Doncaster tried to respond. It was Posh who got the next goal though, a Harrison Burrows centre was met by Idris KANU from close-range and he powered a header into the back of the net via the inside of the crossbar.

Doncaster lost the services of defender Joe Wright due to injury on 27 minutes with the game paused for five minutes as he left on a stretcher. Pym produced a fine stop with his feet to keep out James after a poor defensive pass while at the other end, Eisa whistled a shot just wide and Hamilton was denied by Jones.

Posh made it 4-0 on 40 minutes as a reverse pass from Reed picked out Ricky-Jade JONES, he wriggled into space and drilled a low left-foot shot past the keeper and into the corner for his first league goal of his career.

Posh nearly grabbed a fifth goal on 43 minutes after a flowing move from one end to another, Eisa clipping the outside of the post with a drive from distance after excellent approach play.

The home side made a double change at the break, taking their manager and AJ Greaves off and replacing them with Sims and Blythe. Hamilton was cautioned for a foul on 49 minutes in a dangerous set-piece position, Coppinger took it, but on his big day he struck the crossbar.

Smith and James both saw shots deflected wide for corner kicks as the hosts made a spirited response at the start of the second period. Pym produced another fine stop to keep out substitute Sims, as he diverted the effort onto the bar before the ball was hacked to safety.

Reed fired wide from 20-yards after nicking a loose ball as Posh stepped forward with menace. Posh made a change midway through the second half with Frazer Blake-Tracy replacing Ward.

Darren Ferguson handed youngster Adler Nascimento 20 minutes to impress as he replaced Kent in a second Posh substitution. Hamilton fired over from long-range on 79 minutes. Posh made a triple substitution on 83 minutes with Will Blackmore and Charlie O’Connell coming on for their debuts and Kyle Barker getting a run out.

In stoppage time, Doncaster pulled a goal back as JOHN-JULES slotted past Blackmore as the hosts grabbed a consolation.