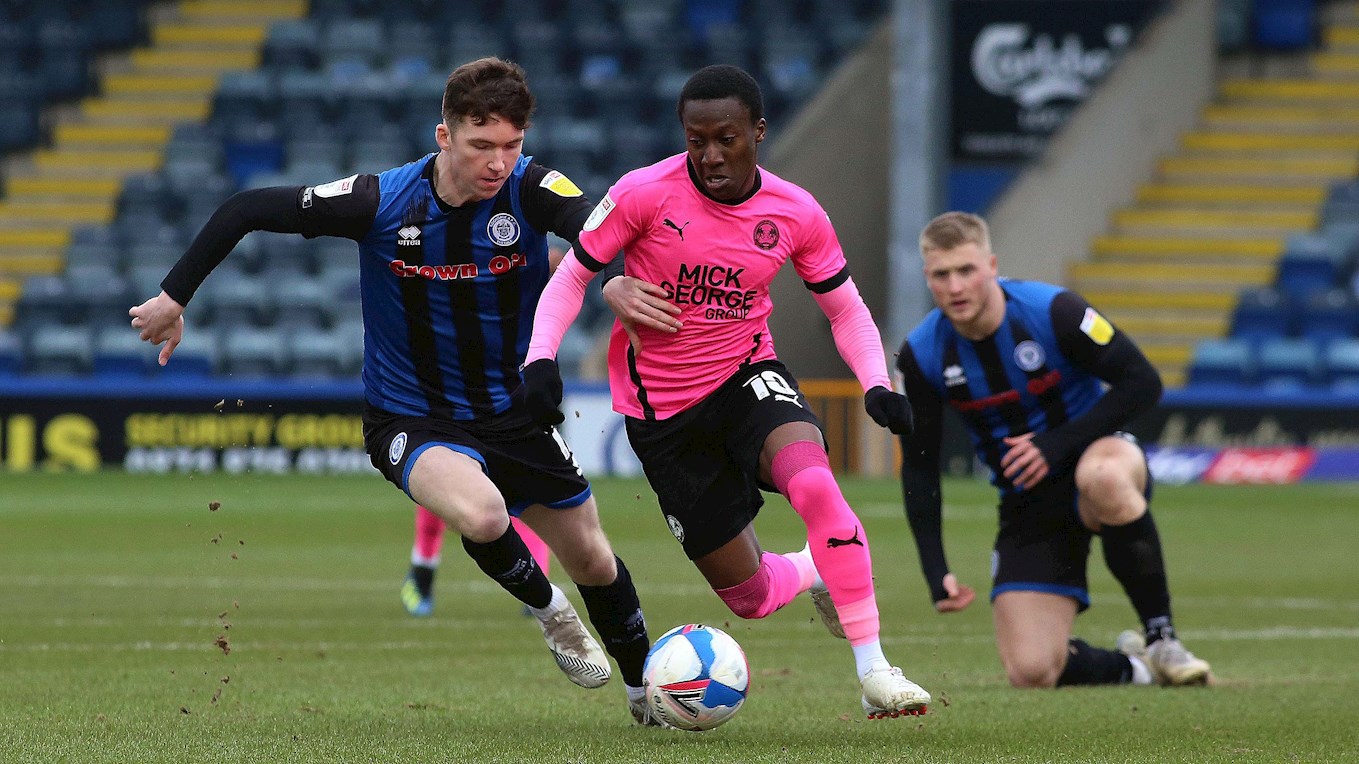 Match report for Rochdale vs Peterborough United on 20 Mar 21

Jonson Clarke-Harris netted a stoppage time equaliser to preserve a point after a 3-3 draw at the Crown Oil Arena.

Peterborough United threw away a 2-0 lead to be losing 3-2 going into stoppage time, but a Jonson Clarke-Harris spot-kick ensured Darren Ferguson’s men at least picked up a point from a barely believable afternoon in Rochdale.

After a subdued start, it was Posh who made the breakthrough on five minutes, a superb goal from Sirki DEMBELE, his effort swerving away from the goalkeeper Bazunu and into the back of the net after the former Grimsby Town man let fly from 25-yards.

Dembele had another go four minutes later after a clever touch from Clarke-Harris, but this time he fired over the crossbar from distance. Conor Grant fired wide of the far post with his left-foot at the other end as Dale broke at pace on the counter-attack.

Shaunghnessy fired wide from the edge of the box with his left-foot on 17 minutes while Clarke-Harris curled a free-kick past the upright after Dembele was upended on the edge of the box on 23 minutes. Humphrys sent an acrobatic overhead kick wide of the target from a Keohane cross as the first third of the game drew to a close.

Osho did well to beat two defenders and create a shooting opportunity, but his floated effort was comfortable for Pym. Szmodics sliced a shot wide of the target from long-range on 35 minutes after Kent did well to win possession high.

Humphrys fired wide of the near post with his left-foot after wriggling into a bit of space on 39 minutes as Dale threatened an equaliser. Deep into stoppage time, Posh added a second goal as a pass from Dembele picked out SZMODICS and he neatly squeezed the ball past the keeper and into the bottom corner.

Neither side made any changes at the break and the hosts came close to pulling a goal back as Keohane let fly from distance, but the ball flew over the crossbar. Humphrys then fired over the top as Posh lost possession to the annoyance of manager Darren Ferguson.

The hosts were given the chance to pull a goal back from the spot after a foul by Kent and HUMPHRYS stepped up and sent Pym the wrong way from the spot. Rathbone was cautioned for a foul on Dembele by referee Mr Rock.

Posh made a double change shortly afterwards with Idris Kanu and Mo Eisa replacing Ward and Szmodics. Bazunu produced a stunning reflex stop to keep out Dembele after good work from Thompson on 70 minutes as Posh came close to an important third.

Kent was cautioned for a foul on substitute Baah after Clarke-Harris saw a goalbound shot well blocked by O’Connell. On 82 minutes, the hosts found the equaliser as BEESLEY somehow found the top corner with a header at the near post.

In the 90th minute, Rochdale found a winner as KEOHANE slammed home from close-range as the ball ran loose. Moments later, Posh were level as CLARKE-HARRIS converted from the spot after Thompson had been upended in the box.