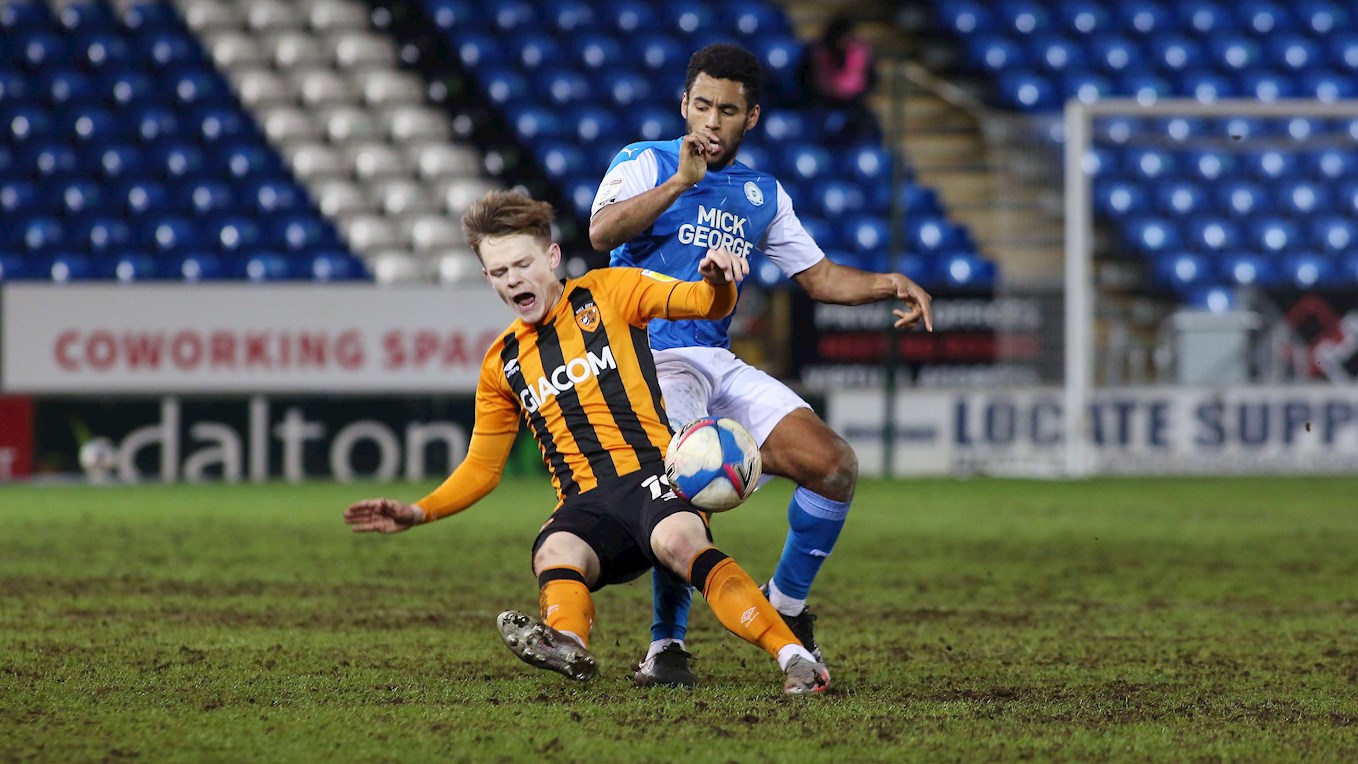 Grant McCann’s Hull City came from behind to secure a 3-1 victory at the Weston Homes Stadium, but the key moment of the game was the dismissal of midfielder Ethan Hamilton, who picked up two yellow cards in the first half from referee John Busby.

Posh opened the scoring on seven minutes and it was a fine goal in terms of its construction, Ethan Hamilton picked out Dan Butler down the left-hand side, his cross caused problems, Sammie Szmodics kept it alive and the ball fell kindly for Reece BROWN who was on hand to net his second goal of the campaign.

Joe Ward tested the experienced Matt Ingram with a cross-shot on 11 minutes as Posh continued to make the early running. The visitors levelled the scores on 20 minutes with their first effort on goal, a Honeyman free-kick was headed into the back of the net by defender BURKE.

Ethan Hamilton was cautioned for a foul on 27 minutes by referee Jon Busby, with the official irking both managers. Frankie Kent tested the reflexes of Ingram on 33 minutes after a rampaging run from centre back, the former Colchester United man seeing his fierce drive pushed around the post by the keeper.

On 41 minutes, Ethan Hamilton was shown a second yellow card for a tackle on Coyle and Posh would have to play the remaining 50 minutes with 10-men. Honeyman sliced a glorious chance wide of the target on 44 minutes as the Tigers came close to taking the lead before the interval.

Deep into stoppage time, Posh were a whisker away from re-taking the lead as Joe Ward cracked a 35-yard free-kick against the inside of the post before Clarke-Harris side-footed the rebound over the crossbar with his right-foot.

Darren Ferguson made a change at the break with Niall Mason replacing Szmodics. The visitors didn’t take long to take advantage of their numerical advantage as an Elder cross was tapped home by Keane LEWIS-POTTER from six-yards.

The Tigers added a third before the hour mark as Kent bundled into Honeyman in the box and WILKS stepped up to convert from the spot. Dembele was cautioned in stoppage time as Hull City played out the remaining minutes to secure a third straight win to extend their advantage at the top of the table.