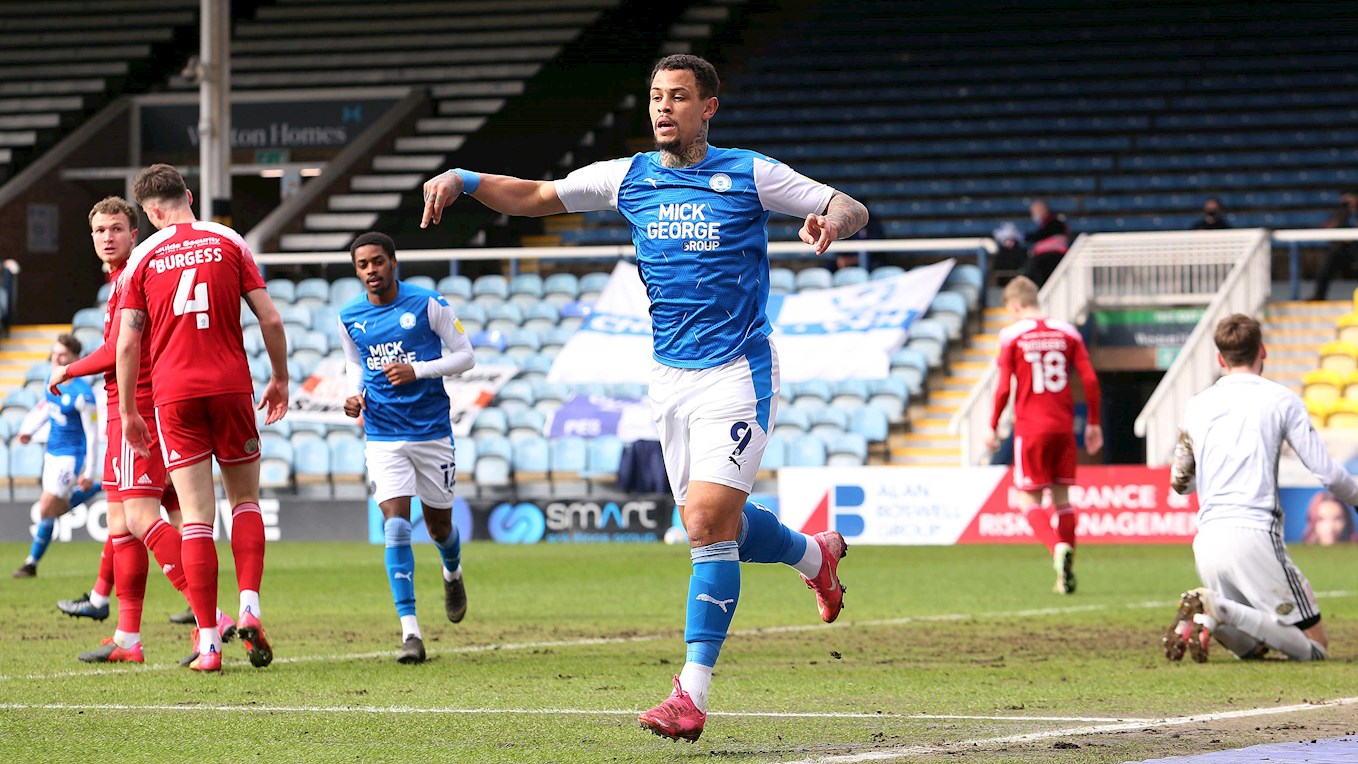 Jonson Clarke-Harris netted his second hat-trick of the season in a big win for Darren Ferguson’s men.

Peterborough United put Accrington Stanley to the sword at the Weston Homes Stadium as a hat-trick from Jonson Clarke-Harris, a double from Sammie Szmodics and goals for substitutes Idris Kanu and Mo Eisa secured a hugely impressive 7-0 victory.

Posh were a whisker away from breaking the deadlock inside the opening minute as Joe Ward cracked the outside of the post with a left-foot 25-yard piledriver. Posh were ahead on three minutes, an excellent move with Joe Ward down the right taking a good first touch and delivering a low centre which was converted calmly from close-range by leading scorer Jonson CLARKE-HARRIS.

Posh doubled the lead on nine minutes, Ward picked out Harrison Burrows, his shot was parried by Savin who then did superbly to stop an initial effort from Clarke-Harris, but the striker wasn’t to be denied, CLARKE-HARRIS there to tap home when the ball ran loose.

Darren Ferguson’s men made it 3-0 on 23 minutes, Ward flicking the ball into the path of SZMODICS, he took a touch and drilled a low right-foot shot into the bottom corner from an acute angle. Christy Pym made a good stop to keep out a left-footed Maguire free-kick on 27 minutes after Burrows was penalised for a foul.

The visitors were forced into a change just past the hour mark with Mark Hughes limping out of the action to be replaced by Jonny Russell. Szmodics lofted a header over a stranded Savin moments later but he didn’t get enough on the effort to see it bounce towards goal.

Stanley came close to pulling a goal back three minutes before the break as Burgess struck the crossbar from a long throw as Posh struggled to clear their lines. Two minutes into the second half, substitute Russell fired over from a tight angle after a fortunate ricochet fell into his path.

Posh made it 4-0 on 48 minutes, a lofted ball forward from Burrows picked out SZMODICS, he did well to hold off the defender and then produced a classy finish past the keeper. Thompson curled a shot wide with his left-foot from 20-yards on the hour mark as Posh pushed for a fifth goal.

Burrows then picked out Butler on the over-lap and Savin did well to beat his low drive wide of the target. Posh made it 5-0 on 65 minutes and it was a second hat-trick of the campaign for CLARKE-HARRIS as he netted his 25th league goal of the season and 27th in all competitions as he tapped home at the far post as Stanley failed to deal with a Ward centre.

Ferguson made a double change in the aftermath of the goal with Mo Eisa and Niall Mason replacing Clarke-Harris and Thompson. Posh made it 6-0 on 77 minutes as a wonderful defence-splitting pass from Szmodics picked out substitute EISA who rounded the keeper and slotted the ball into the net with his left-foot.

It was 7-0 on 82 minutes as an excellent free-kick from Niall Mason was converted by substitute Idris KANU for his first goal of the season and first league goal in Posh colours. Eisa had the ball in the net again on 85 minutes, but the offside flag was raised and the goal was chalked off.

Jones had a chance to make it 8-0 moments later but after controlling a Hamilton pass into his path, he skied his effort wide when off balance. Posh should have had a penalty on 87 minutes as Eisa was brought down in the box, but the referee gave nothing to Ferguson’s disgust. Savin tipped over a swerving Hamilton effort in stoppage time as Posh went for number 8.