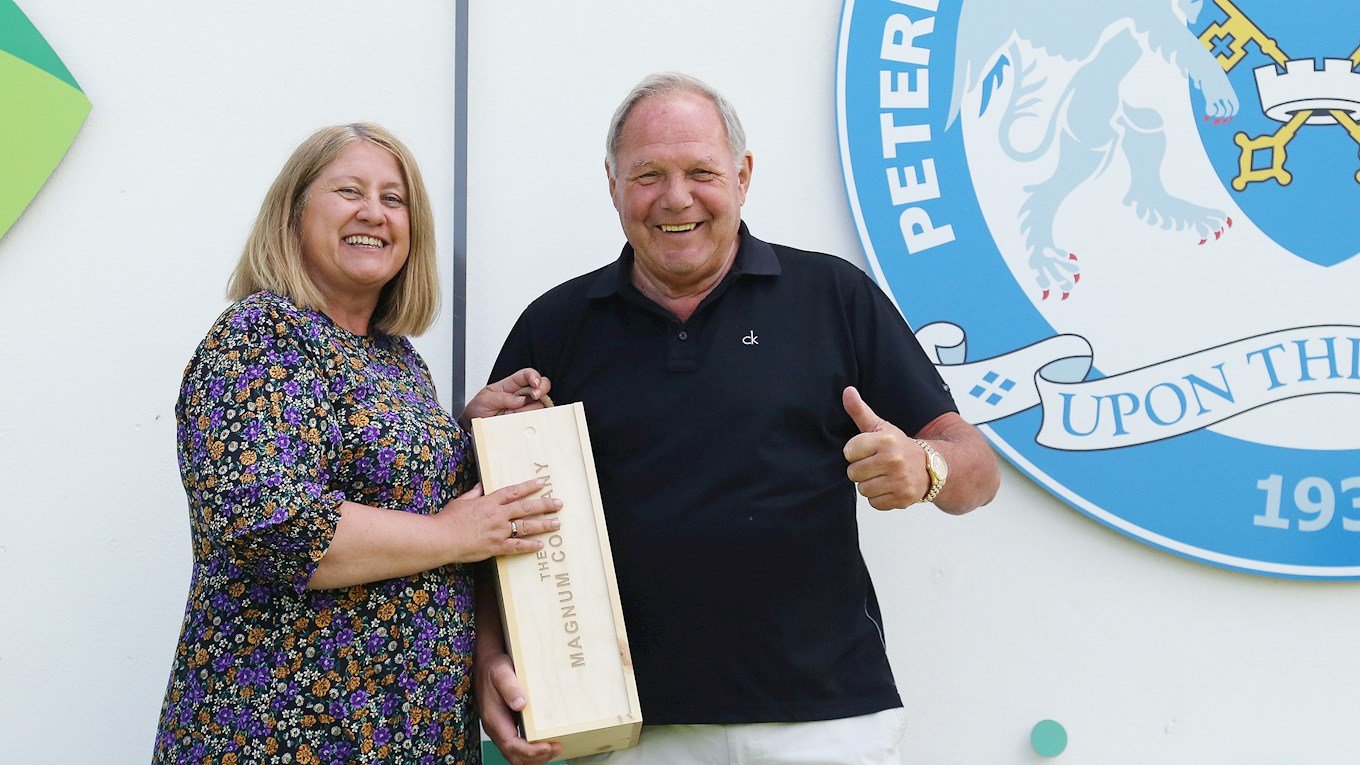 Barry Fry celebrates 25 years at the Posh with the Foundation making a presentation to the Director of Football to mark the occasion.

The Posh Foundation have paid tribute to Director of Football Barry Fry as he reaches 25 years at the football club with Chief Executive Gill Wignall making a presentation at the Weston Homes Stadium. The Foundation have written the following piece;

Barry Fry’s name has become synonymous with Peterborough United Football Club since his arrival at the club, and understandably so, given he is now celebrating 25 years of association with the Posh.

In a playing career which began at Manchester United, playing for Posh was one of the only jobs Fry hasn’t done since walking through the door for the first time. After managing Dunstable Town, Hillingdon Borough, Bedford Town, Barnet, Southend United and Birmingham City, Fry arrived at the Weston Homes Stadium back in May 1996 as both Owner/Chairman and First Team Manager.

His main stint as Posh manager lasted nine years, before he switched roles in 2005 to become Director of Football and in that time he guided the club to play-off success at Wembley Stadium in 2000 thanks to an Andy Clarke winner against Darlington.

In July 2005, Fry was awarded with a testimonial by the Club, which saw a star-studded Manchester United team take on the Posh at the Weston Homes Stadium. A Ruud van Nistelrooy hat-trick, a brace from Cristiano Ronaldo and a Giuseppe Rossi goal saw Sir Alex Ferguson’s side take a big win in front of more than 15,000 fans under the lights in PE1, a night we are sure Barry will never forget.

He did briefly return to the dugout in May 2006 after the infamous resignation of then caretaker manager, Steve Bleasdale, an hour before kick off of a League Two match against Macclesfield Town. The Posh won 3-2 that day through a goal from David Farrell and a brace from Danny Crow.

Since Darragh MacAnthony took over as Chairman and Owner of the Club, Fry has been operating as the Club’s Director of Football, a role he still holds today. And this year, he celebrates his 25th year at the Club.

When Peterborough United Foundation was set up in August 2009, Barry became a trustee and supported the work of the Foundation for the ten years which followed. In that time and with Barry’s support, the Foundation has developed and grown into what it is today. He stepped down as a trustee in September 2019.

The ‘legend’ tag is one which is banded around a lot in football, sometimes undeservedly, but Barry has certainly earned that tag for his passion and commitment to our Club for the last 25 years. Our congratulations go to Barry for reaching this milestone, but also our thanks for his hard work and service to the Club we all love over the past 25 years.