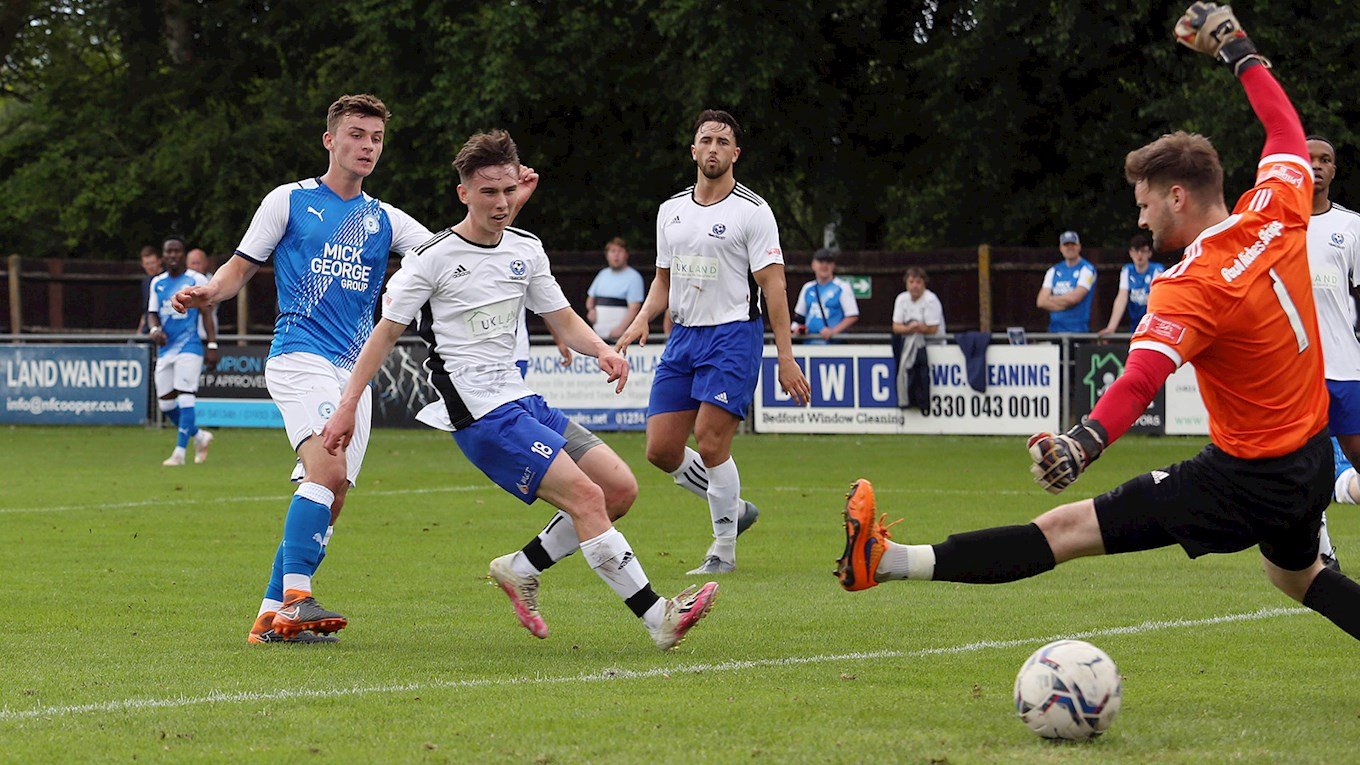 Harrison Burrows bagged a brace alongside two other Posh players in 8-0 win at Bedford Town.

Peterborough United began their pre-season friendly campaign with an 8-0 victory at the Eyrie against Bedford Town with Harrison Burrows, Jorge Grant and Mo Eisa all bagging a brace alongside strikes from Ricky-Jade Jones and a neat header from Nathan Thompson.

It didn’t take long for Posh to open the scoring, six minutes in when Ricky-Jade Jones’ shot was diverted onto the post by Street only for summer signing Jorge GRANT to stroke home the rebound from around eight yards.

It was nearly 2-0 moments later after a slick move, Szmodics pulling the ball back into a dangerous area and the onrushing Ryan Broom made strong contact, but a defender somehow managed to block on the line.

Posh did double the lead on 12 minutes and it was another slick move with Dan Butler and Szmodics involved, defender Nathan THOMPSON finishing the move off, stooping low to head home via the inside of the post from around six-yards.

Posh made it 3-0 on the quarter hour mark as a long ball forward from Fernandes was allowed to bounce by the Bedford centre back who then didn’t get enough on his back header allowing Ricky-Jade JONES to nip in and fire into the gaping net with his left-foot.

Idris Kanu came close to number four moments later, but he couldn’t keep his attempted lob down as the keeper Street advanced. Szmodics was denied by Street on 23 minutes after a good run and cross from Broom down the right-hand side.

On 26 minutes, Posh made it four as the pace of Jones was too much for the Bedford defence and he was brought down in the box allowing GRANT to grab his second of the game, this time coolly converting from the penalty spot.

Street produced a fine stop to keep out a curling Kanu effort on 37 minutes before Szmodics fired wide of the near post as Darren Ferguson’s first half team tried to find a fifth goal before the break. Ferguson changed his XI for the second half and they didn’t take long to start purring, a fine run and cross from Ward picked out Eisa, but his shot was well kept out by Street.

Harrison Burrows sent a shot a whisker over the bar on 52 minutes as Posh came close to making it 5-0. Posh had the chance to add to their tally from the spot after Eisa was needlessly pushed over in the box but the striker saw his penalty come back off the crossbar.

Powell was kept out by Street moments later after connecting well on the half volley following a deep O’Connell centre. Dembele had the ball in the back of the net on 68 minutes after a superb run from Burrows, but the assistant referee had a flag raised and the goal was chalked off.

It was 5-0 on 70 minutes as superb control, speed and awareness from Dembele saw him pick out EISA and there was no mistake from the striker, slotting the ball low into the bottom corner. Hamilton and Eisa were both denied by the Bedford keeper as the second half progressed and the hosts get tired.

It was 6-0 moments later and EISA was again on target, ramming the ball into the back of the net from close-range. Harrison BURROWS made it 7-0 with arguably the goal of the game, excellent close control and an expert finish past the keeper. Less than 60 seconds later, BURROWS added an eighth, a toe-poke finish after good work from Ethan Hamilton.