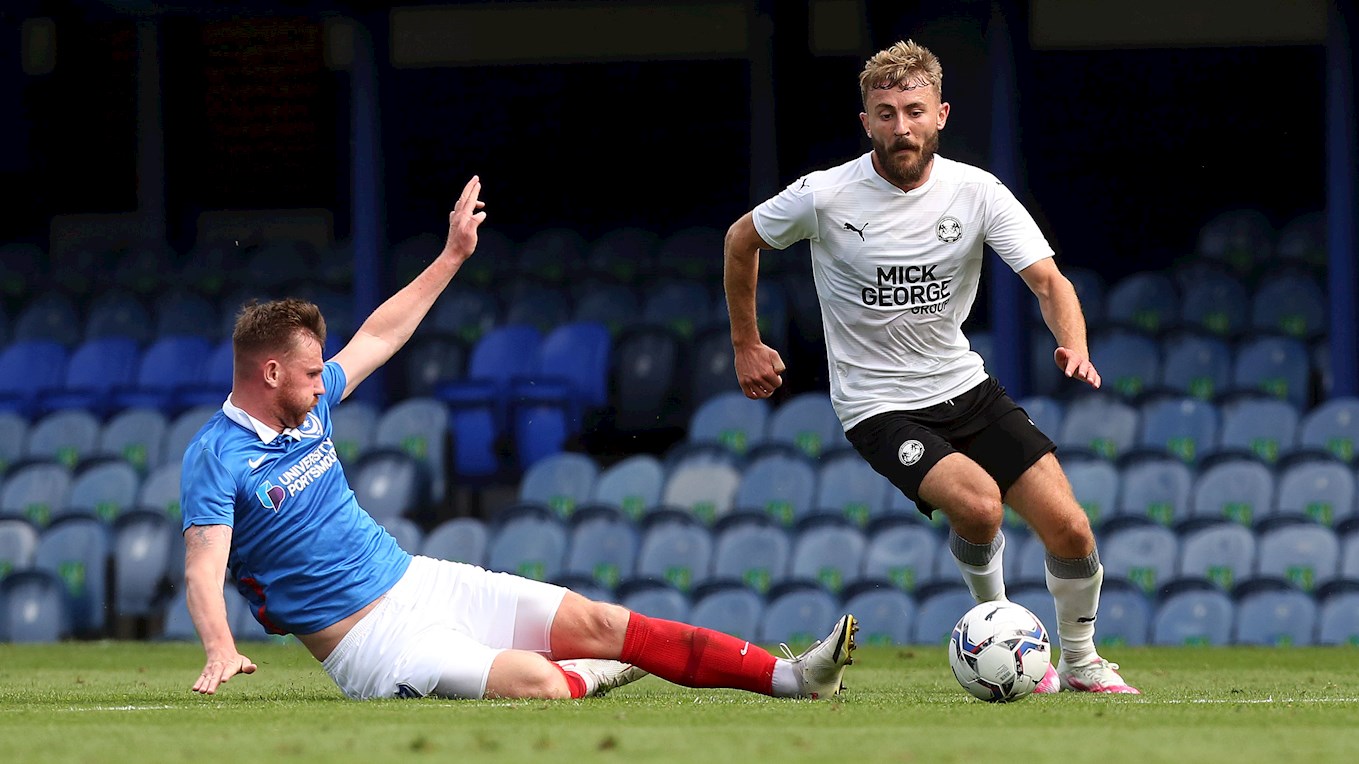 Peterborough United suffered a 2-0 pre-season friendly defeat at Fratton Park as two first half goals gave Sky Bet League One side Portsmouth a 2-0 victory in front of over 4,000 noisy supporters.

Jorge Grant curled an effort wide of the target via a deflection on eight minutes and from the resulting corner kick, Frankie Kent got a header towards goal, but it was cleared following a lively start to the contest at Fratton Park.

Ronan Curtis fired over from distance for the hosts after Posh were guilty of giving the ball away in a relatively dangerous area. Christy Pym was well placed to keep out a low effort from Curtis on 16 minutes before Posh hacked the ball to safety.

Clark Robertson fired wide for Danny Cowley’s men on 22 minutes after a well-worked set-piece from Pompey down the right. The home side found the breakthrough on 25 minutes and it was a calamity at the back, as two under-hit passes were seized upon allowing one-time Posh midfield man Ryan TUNNICLIFFE to slot into a gaping net.

Harness glanced a header over the top as Posh changed formation to a three-man central defence with Burrows pushed into the 10 and Szmodics joining Marriott in attack. Posh produced a slick move featuring first-time football on 35 minutes from back to front with Ward’s eventual cross just too high for Szmodics at the back post.

Szmodics stabbed a teasing cross from Butler wide of the target on 37 minutes after another slick Posh move. Portsmouth doubled the lead just before the interval and it was a fine finish from Ronan CURTIS who found the corner of the net from the edge of the box, leaving goalkeeper Pym with no chance.

Pym did well to deny Harness before Thompson produced a fine last-ditch block to stop Marquis from converting the rebound as a deflection fell kindly for the Pompey forwards. Burrows was a whisker away from reducing the arrears in first half stoppage time, but his effort went wide of the far post.

Grant tested keeper Alex Bass moments after the re-start after good work from Butler and Szmodics down the left hand side. Szmodics then saw a shot blocked after good wing-play from Ward and approach play from Butler.

Thompson and Marquis were both yellow carded by the referee Andy Davies following a tussle that began with the Pompey man fouling the Posh defender. Burrows saw a curling effort from 25-yards gathered by goalkeeper Bass as the game reached the midway point of the second period.

Pym was well placed to keep out Harness as the game entered the final exchanges in the sunshine at Fratton Park.