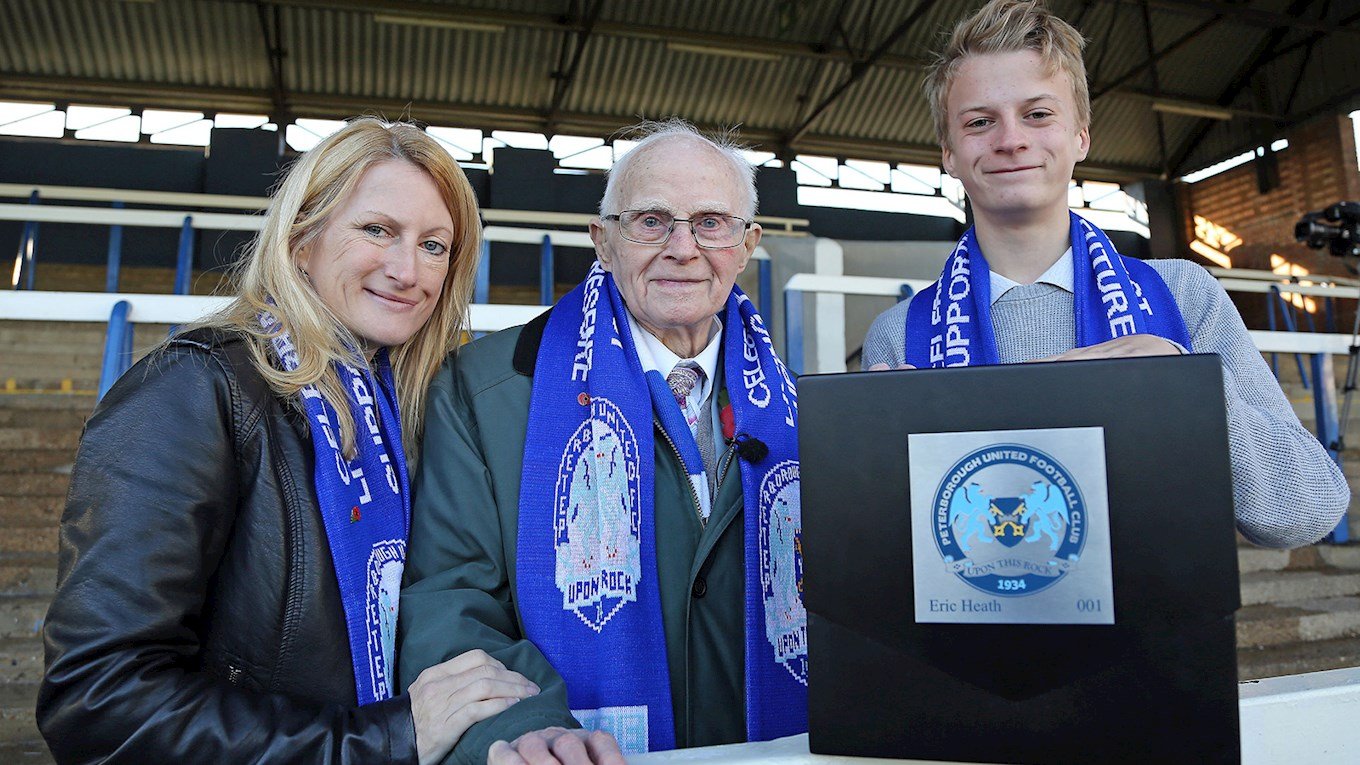 Eric Heath, a fan since the very start, passed away last week and club historian Peter Lane has paid tribute.

“It was with very deep regret that I heard of the passing of Mr Eric Heath, who sadly passed away on Tuesday 29th June 2021 at his home in Warmington, at the grand age of 95 years.

Eric was a passionate and devoted fan of his beloved Peterborough United and attended the Club’s very first game at London Road in September 1934 against Gainsborough Trinity where Posh won 4-0.  Over the past few years, I had the great pleasure in meeting this wonderful gentleman and soon became a great friend, especially reminiscing about the Posh.  His memory and recollections were so good up to the present day.

To celebrate his 90th birthday, we helped his family arrange a surprise for him whereby he was a guest of the Club for a special brunch prior to an early kick off game. So, together with his daughter Karen we were asked to represent Barry Fry to entertain Eric, who absolutely loved this. Barry was entertaining the Lord Bumbury Cricket Team, some of whom enjoyed meeting Eric. We had the pleasure of taking Eric onto the pitch to receive a special one-off plaque from the Club in recognition of his support.

As a youngster he loved playing football and even had a trial match for one of England’s top Club Wolverhampton Wanderers in 1946. Then one year later he signed for Peterborough United by none other than Manager Sam Haden.  Eric made six Reserve appearances and one first team match away to Rushden Town in the Maunsell Cup in 1947.  These games were played whilst on leave from the Army.

Eric continued to play later in local football whilst continuing to support Posh and the only period he missed watching was whilst on Army duties stationed in Africa from 1947 to 1948.  Over the years he wrote many articles on both Posh and local teams as well as writing some wonderful poetry about the Posh. Amongst other achievements he set up a Posh quiz where he raised money for Sue Ryder Thorpe Hall Hospice and Facial Palsy UK.  The Daily Telegraph learned about Eric’s remarkable life and wrote an article about him in 2016.  He even had his own website called ‘yourgrandadsfootball.co.uk’

I shall personally miss this wonderful gentleman immensely talking about Posh history and much more. Our condolences to his dear daughter Karen, sonS Gary and Stuart and their families. R.I.P. ERIC a true Posh fan