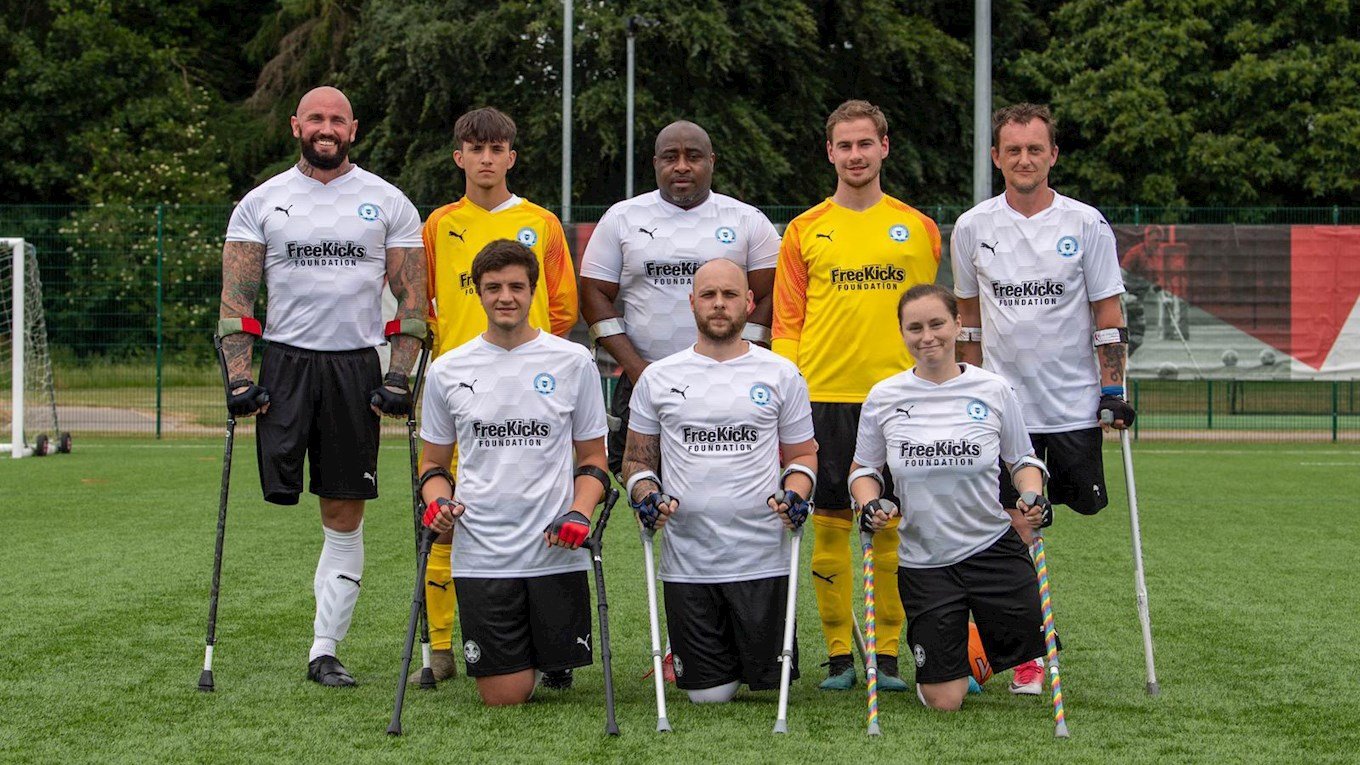 The Peterborough United Amputee team are playing Portsmouth in the FA Disability Cup this Sunday, live on BT Sport.

On Sunday 18th July, the Posh amputee side take on Portsmouth in the FA Disability Cup with a 10.30am kick off.  The fixture, along with four other disability finals, are being held at St George’s Park, the home of all of England’s national teams and where the England squad trained during the recent Euro2020 tournament.

The side are managed by Teilo Pearce with the final being his last game in charge, opting to step-aside for the upcoming season after many years in charge.  Pearce will be assisted by Gary and Tyler Marheineke. Pearce said: “By winning the National title in 2019 we earned the right to feature in this showpiece event. When the season was brought to an early end in 2020 we thought that we missed the opportunity to take part, so we are delighted to be able to feature this year. We have a mix of established Internationals and players newer to the game. To be able to share the experience of playing at St George’s Park live on BT Sports is something that will stay with us forever. I’d love to see more eligible players in the city and surrounding areas take part in pan ability football and we are really proud to be able to represent Peterborough. Portsmouth are very worthy opponents and I’d encourage as many people as possible to watch the game.”

The amputee team have a long running shirt sponsorship with local charity Free Kicks Foundation, who offer football related activities to ill, bereaved and disadvantaged children.  During the pandemic, they have also supported with food donations and explored other opportunities to work in local communities alongside the Posh Foundation and other Community Trusts.

The club have also received a generous training top donation from CFG Law, with the tops debuting at this fixture.   Established over 30 years ago, CFG Law is a team of over 70 solicitors and support colleagues specialising in serious and catastrophic injury claims, including brain and spinal cord injuries, amputations, orthopaedic injuries & fatal accidents. We do what we do because we want to help. We recognise those affected by injury goes beyond the injured person and includes family and all those other people wanting to help, including healthcare professionals, charities, etc.

Steve Maloret, Partnerships Manager of CFG Law stated “Our purpose is to help those affected by injury – together. We know that to be effective we have to work together as a team and after opening a new office in the East of England earlier this year we were keen to support a club in the region that matched our values. Peterborough United Amputees have a record of success in winning FA Disability Cups, League Cup & the Championship over recent years through the same combination of skill, hard work and teamwork that we have at CFG.  We look forward to cheering the team on to more success in the future.”

The Posh Foundation’s Community Manager, Gavin Slater added “I would like to thank both sponsors for their support to our Amputee side, their generosity is appreciated and I know that they will be looking smart for the cameras.  I urge everyone to view the game and watch the commitment and desire that this squad has to achieve and bring success to Peterborough United.  I want to thank Teilo for his hard work and dedication to the team over the recent years and wish the whole squad the best of luck in the final”.

The 2021 FA Disability Cup, the fifth edition of the competition, will see five cup finals scheduled across the weekend, delivered by The FA in partnership with a range of impairment-specific organisations.

The Cup is the largest competition of its kind in the UK, giving players within impairment-specific football a national competition of their own, complete with dreams of reaching St. George’s Park for finals weekend.

BT Sport’s coverage will be presented by Alex Brooker, Jules Breach and five-time Paralympic champion Hannah Cockcroft. The finals will be the most accessible live broadcast of a football match taking place in the UK to date.   On each day, day, live coverage of all the games will feature on three BT Sport channels with each offering different accessibility features.