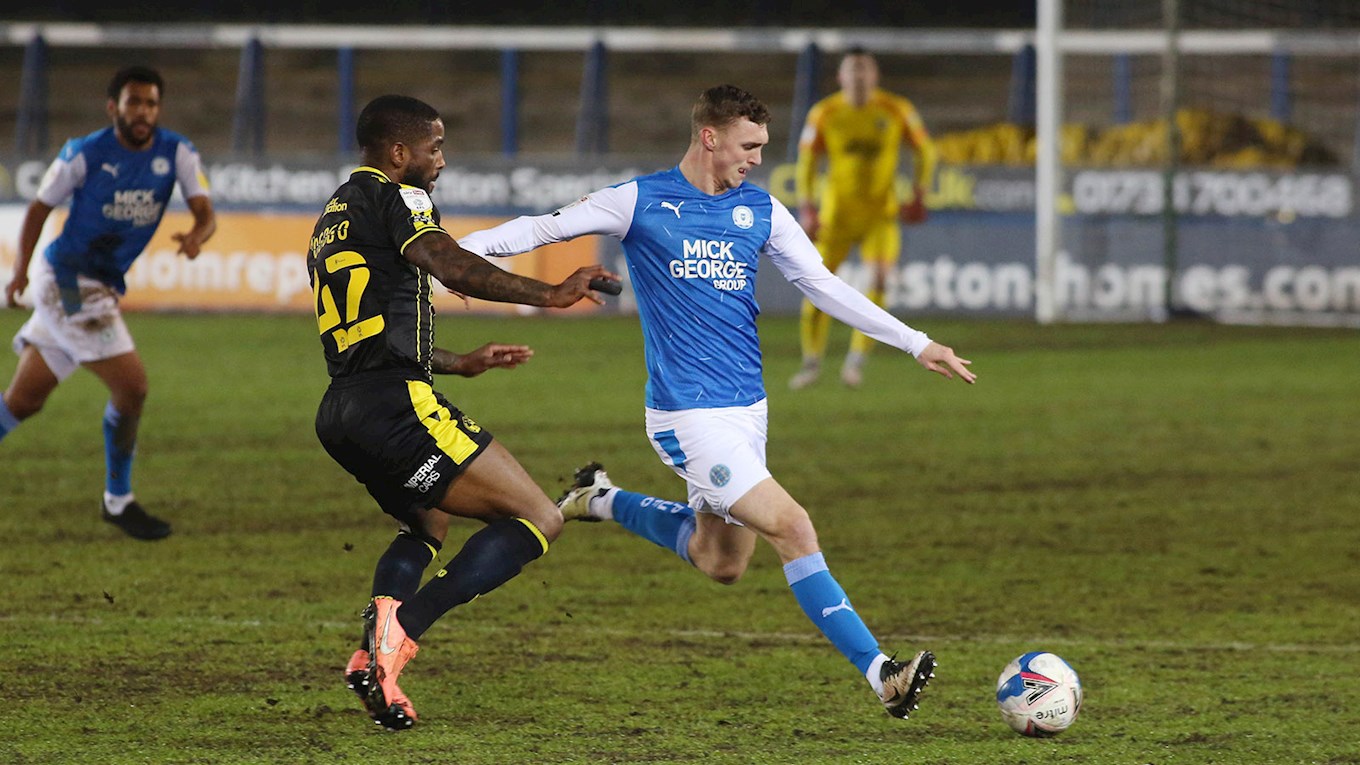 Posh held 0-0 by Bristol Rovers at the Weston Homes Stadium.

Former Peterborough United goalkeeper Joe Day was the hero for Bristol Rovers as he made a string of fine saves to keep Darren Ferguson’s men at bay at the Weston Homes Stadium with the game somehow ending goalless despite a host of opportunities.

Former Posh shot-stopper Joe Day was alert to make a smart save with his legs inside the opening three minutes, keeping out an effort from Jonson Clarke-Harris after a superb through ball from the in-form Siriki Dembele.

Day was called upon again moments later as Dembele cut inside from the left, his curling effort well kept out by the goalkeeper at the second attempt. At the other end, Nicholson saw a low shot gathered comfortably by Pym as the open nature of this game continued.

Szmodics dragged a left-foot effort well wide after charging down an Ehmer clearance before the same Posh player saw a cross-shot beaten away by the overworked Day. Another ex-Posh man, Erhun Oztumer, curled a free-kick over the crossbar on the quarter hour mark after Frankie Kent had been penalised for a foul.

Szmodics played a sharp one two on the edge of the area on 17 minutes and let fly but his well struck shot was straight at Day. Pym produced a fine stop to keep out a stinging low drive from Hanlan on 27 minutes with Nicholson firing the rebound wide under pressure from the keeper and Kent.

On 28 minutes, Dan Butler advanced into some space down the left hand side, but he fired well wide off balance when it came to the strike. Day came to the rescue of the Pirates again as the game reached the half hour point, stretching to keep out a snap-shot from Szmodics.

Butler saw a low shot well held by Day on the difficult surface on 31 minutes after a strong run and pass from Kanu. Nicholson clipped the outside of the post with a clever volley from a tight angle on 36 minutes after a clipped pass from Oztumer over the head of Kent.

Taylor curled a left-foot effort over the bar after a neat one two with midfield partner Brown five minutes before the interval as Posh pushed for the breakthrough as the rain continued to fall. Day was well placed to gather a low strike from Kanu on 71 minutes after good approach play from Clarke-Harris and Dembele.

Dembele then had a great chance to open the scoring as he raced onto a through and rounded the keeper, but a defender managed to get back to deny him on the line. Darren Ferguson made a double change as the game entered the final third with Harrison Burrows and Ethan Hamilton introduced for Butler and Brown.

Substitute Ethan Hamilton whistled a shot inches past the far post from a tight angle on 78 minutes after linking well with fellow substitute Burrows. Beevers was the first man to be cautioned on 81 minutes by referee Graham Salisbury for a foul on Hanlan.

Clarke-Harris renewed his battle with Day on 84 minutes, curling a free kick towards goal that the keeper did well to beat away. Dembele was next to be denied by Day as he beat away another strike before recovering to be in the right place to keep out Hamilton.

Burrows was next to try his luck and again Day was equal to the effort.