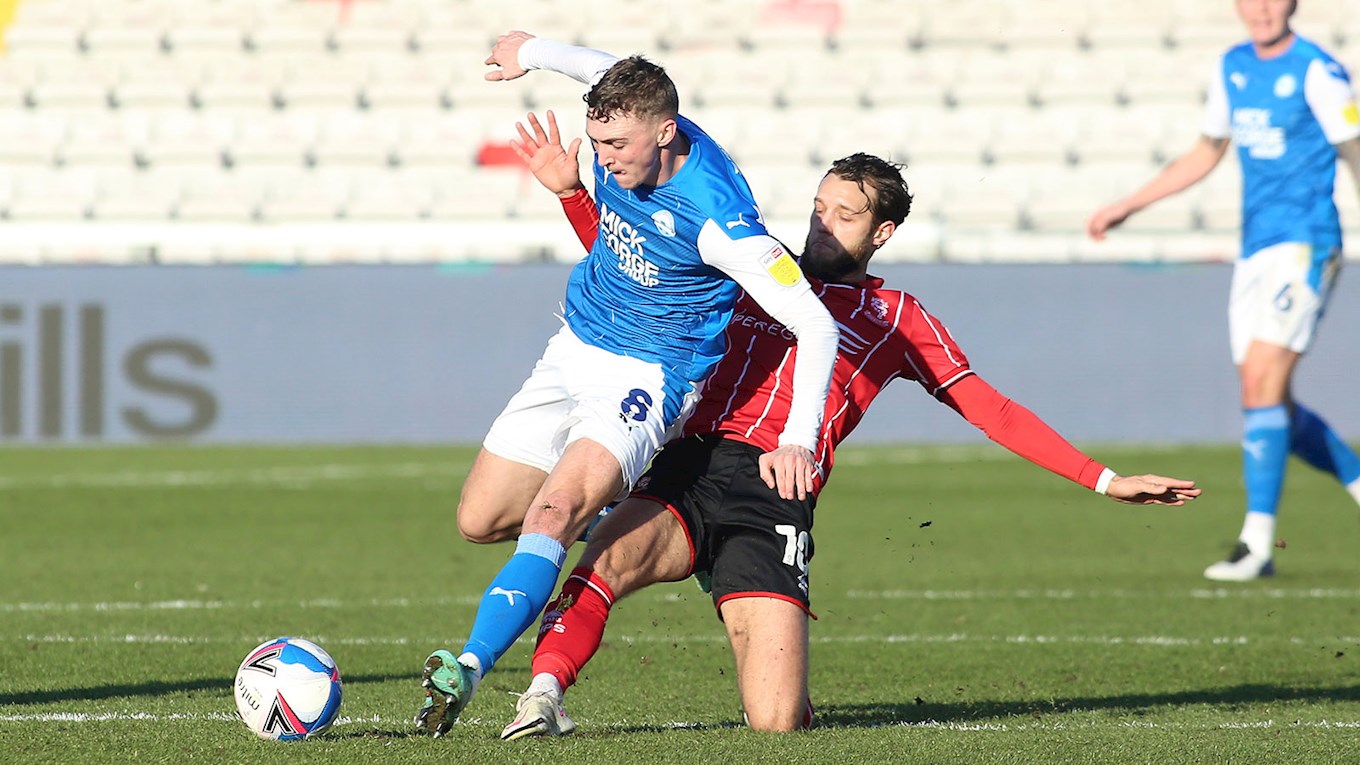 Posh returned to action with a hard fought 1-1 draw at Lincoln City.

Peterborough United were reduced to 10-men for the final 20 minutes against the league leaders in Sky Bet League One but held on for a battling point in the first game for nearly a month for Darren Ferguson’s men.

Posh made a bright start to the contest, winning numerous corner kicks inside the opening eight minutes with a low Jack Taylor effort well held by goalkeeper Alex Palmer. However, the deadlock was broken on 10 minutes, Nathan Thompson doing well to win the ball in the penalty area and square for Clarke-Harris, his well-struck shot was cleared off the line but rebounded back into the net via the unfortunate TJ EMOA.

Jackson was cautioned by referee Will Finnie for a foul on Sammie Szmodics on the quarter hour mark. The home side should have drawn level moments later on the counter attack as Johnson raced clear, but he fired over with his left-foot.

Bridcutt was next into the book after a crunching tackle on Szmodics in the centre circle, while Thompson was also carded for a late tackle.  Clarke-Harris saw a header into the ground comfortably claimed by Palmer after an excellent right-wing centre from Taylor.

On the half hour mark, Christy Pym was called upon for the first time, getting a fingertip to a fierce Scully effort, diverting it over the bar in the process. Howarth had a good chance to level the scores on 34 minutes as he raced clear down the right-hand side, but he had no composure, firing over the top.

Jorge Grant curled a free-kick around the wall and into the side-netting on 40 minutes as the home side ended the first half strongly with Posh just struggling to keep possession as a consistently as they did in the opening 15 minutes.

Posh were punished for an errand pass and subsequent defending at a set-piece on 47 minutes as Anthony SCULLY was left alone at the back post from a corner kick to sweep past Pym for his ninth goal of the campaign in all competitions.

Clarke-Harris nodded a header over the top two minutes later after a good free-kick into the box from the left-hand side. Dembele fired wide from 25-yards moments later as Posh tried to respond in a positive way to conceding the lead so early in the second period.

Pym produced a fine reaction stop to keep out Johnson from close-range as the Imps came close to turning things around before the hour mark. Grant curled a free kick over the wall but into the side-netting on 65 minutes after Brown was cautioned for a foul.

On 66 minutes, Lincoln were awarded a penalty and Posh were reduced to 10-men as Thompson was dismissed for a second yellow card, penalised for handball. Grant stepped up from the spot but fired wide of the target.

Posh made a triple change moments later with Dan Butler, Ricky Jade Jones and Niall Mason introduced to try and stem the tide. Jones provided a real attacking outlet late on as Posh picked up a point.