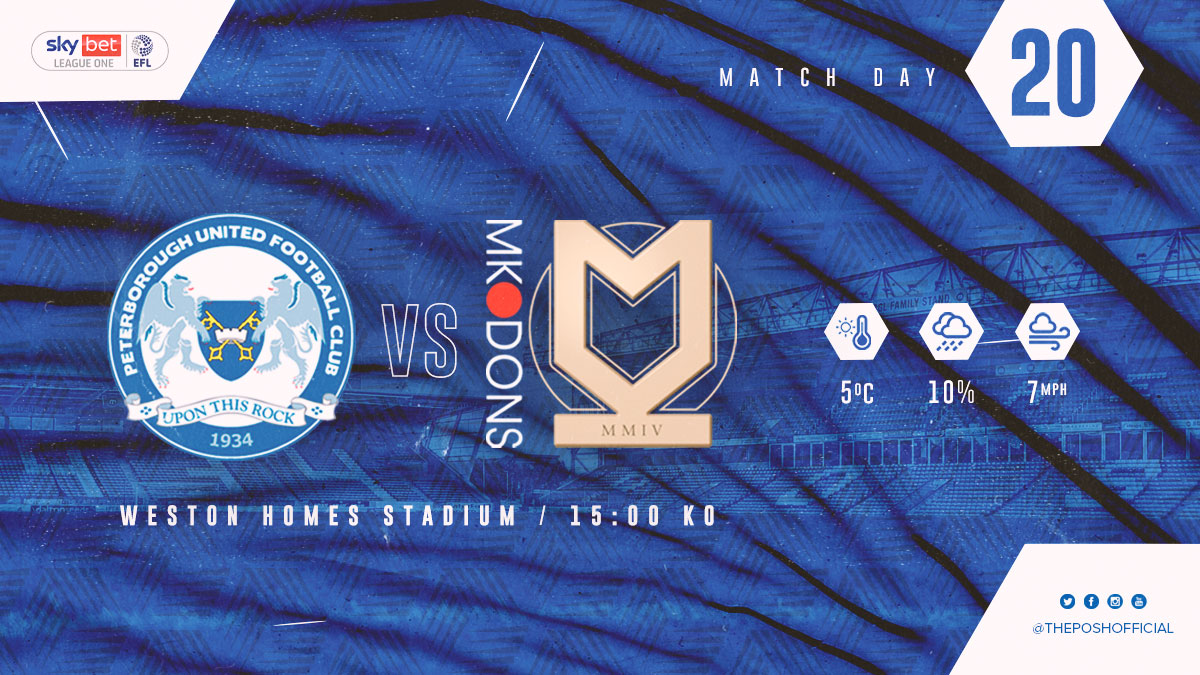 MK Dons are the visitors to the Weston Homes Stadium on Saturday.

Peterborough United are back in Sky Bet League One action on Saturday afternoon with Milton Keynes Dons providing the opposition at the Weston Homes Stadium (3pm) as Darren Ferguson’s men look to build on the thumping win over Portsmouth in the Papa John’s Trophy on Tuesday evening.

The two sides have met fairly recently, with the sides sharing the points following a 1-1 draw at stadium: mk.  The Dons also progressed into the quarter-finals of the Papa John’s Trophy following a 2-0 success at Northampton Town.

Posh are without the services of defender Nathan Thompson, who serves a one-match ban following his red card at Lincoln City. Ironically, he missed the previous clash with the Dons due to suspension after accruing five cautions. Ronnie Edwards is unavailable as he has just come to the end of a period of self-isolation.

Ferguson has no fresh injury worries to contend with following the return to action of Joe Ward and Ricky-Jade Jones following lay-offs. The Dons strengthened their attacking options with the signing of Chelsea front man Charlie Brown and he will go straight into the squad, although it is likely he will be named among the substitutes.

Andrew Surman signed a new contract in mid-week and is expected to continue at the heart of the midfield while Warren O’Hora could make his move permanent following a successful loan stint.

“There were a couple of things we didn’t do well in the game at MK and we know what we need to do to improve on that performance. They are a good side, they keep possession well and they have had some good recent results and pushed Burnley all the way in the FA Cup. I am sure they will start moving up the table quite quickly,” Darren Ferguson said.

I was impressed with Peterborough, I really like how they play. I watched them against Lincoln last weekend an thought they were excellent again. They've got the league's top scorer, who is in a really good vein of form and they trust him to do the business. They can play aggressive attacking football, from a manager I really know and respect. It will be a tough game, like it was at our place but if we attack it with the same mentality and intensity as we did the one before, we'll go there full of confidence,” Dons boss Russell Martin said.

iFollow match passes are available for the game priced at £10. To purchase one, click the link below: