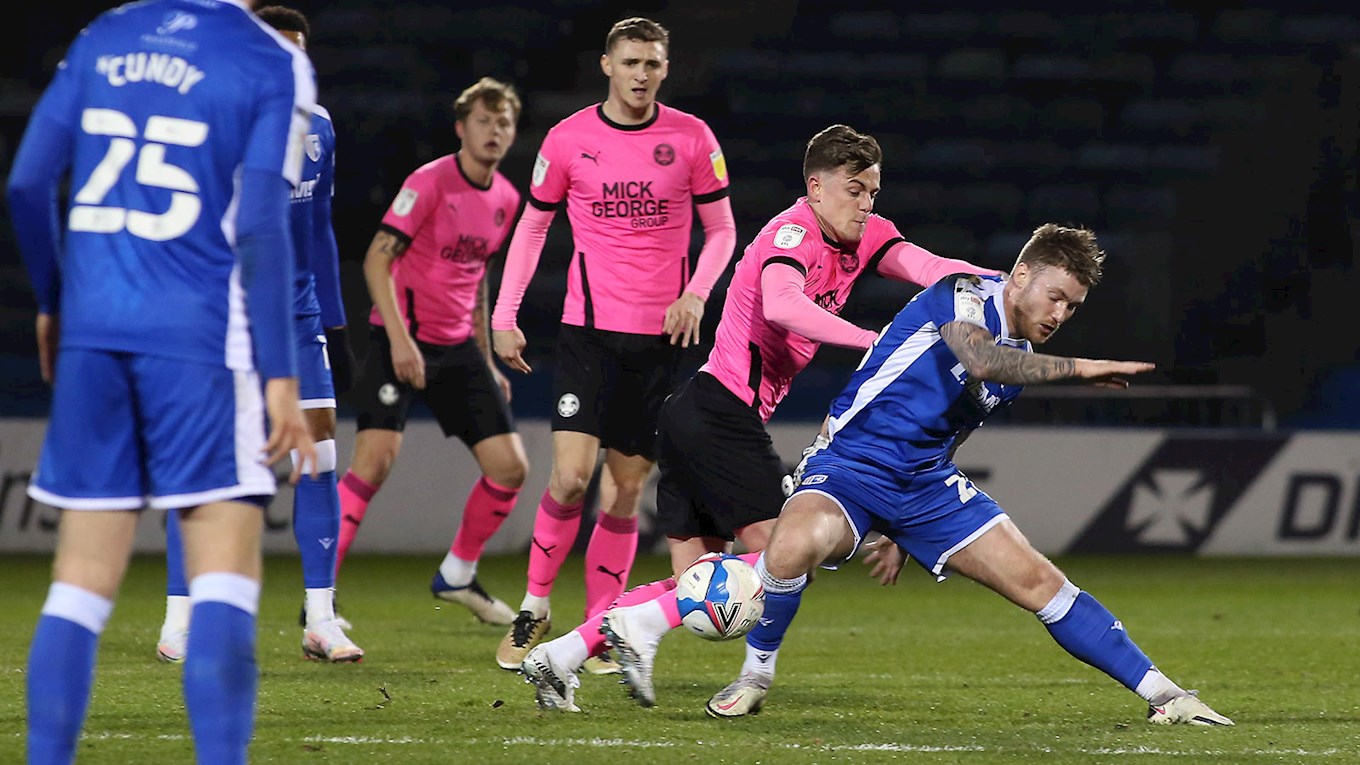 Match report for Gillingham vs Peterborough United on 16 Feb 21

Posh come from 1-0 down to produce a superb second half display to secure three more points at Priestfield.

Peterborough United produced arguably their best 45 minutes away from home this season as two goals from Jonson Clarke-Harris and a goal from substitute Siriki Dembele secured a 3-1 success at Steve Evans’ Gillingham.

A swirling wind at Priestfield made the opening 10 minutes particularly difficult for both sides as they adjusted to the conditions, but it was the hosts who created the first opening, a corner kick on the near side reaching defender Ogilvie who fired over on the half volley.

Mo Eisa saw a powerful effort from distance well blocked as Posh found a bit of rhythm, keeping the ball well in tight areas and spreading the play wide. The hosts opened the scoring on 31 minutes from the penalty spot as AKINDE was adjudged to have been pushed in the box by Taylor, the striker stepped up and converted the spot-kick.

Frankie Kent was cautioned for a foul on 43 minutes as the hosts continued to cause problems with their direct style. Ogilvie fired wide moments later with a snap-shot in the area as Steve Evans continued to make his voice heard.

Posh made a change at the break with Siriki Dembele replacing Eisa in attack. Within a minute of the second half, Posh were level, a superb burst from Thompson ended with the centre back curling a left-foot effort on goal, keeper Bonham could only push it out and CLARKE-HARRIS was there to bundle home from close-range.

Darren Ferguson’s half-time change paid off on 52 minutes as substitute DEMBELE made it 2-1 to the visitors, bursting into the box and his left-foot strike took a deflection and found the back of the net after a sweet move involving Taylor and Szmodics.

On 59 minutes, Clarke-Harris sliced a shot wide of the target after a low centre from Ward somehow landed at his feet, but it was a difficult opportunity as the ball bounced at an awkward height for the front man.

Clarke-Harris was cautioned for a show of dissent on 63 minutes before the hosts made a double change. On 67 minutes, Posh extended their advantage and it was a picture book goal, a delicious cross from the assist king Joe Ward and CLARKE-HARRIS was there to finish it off with a sublime finish.

Szmodics was denied by Bonham on 73 minutes as Posh again broke at pace down the right-hand side. Butler was cautioned by referee Charles Breakspear for a foul on 76 minutes but the free-kick from substitute Graham came to nothing.

Ward was denied by Bonham from a dead ball situation on 79 minutes with the keeper doing well to pounce when the ball ran loose. Beevers produced a fine defensive header on his own goal-line to deny Akinde after he flicked a Graham free-kick towards the back post on 87 minutes.