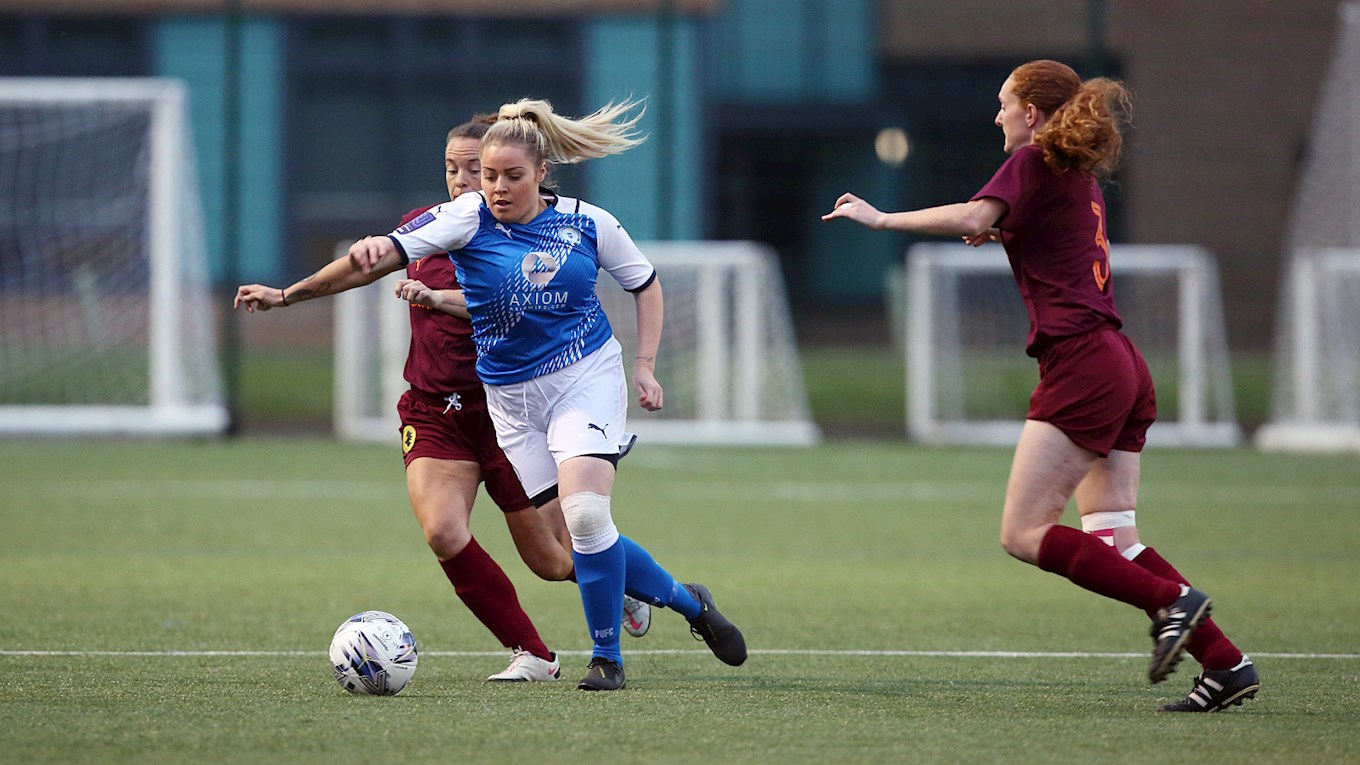 A first-half goal condemns the Ladies to defeat in their first home fixture of the season.

Peterborough United Women’s fell to a 1-0 defeat against Holwell Sports Women FC in their first home fixture in the FA Women’s National League Division One Midlands after a late first-half goal from the visitors despite an improved performance from the Ladies after the break.

A deep free-kick from Stacey McConville found Cassie Steward at the back-post, but her shot just glanced past the far post. Ellen Marson then saw an effort from the edge of the box just go wide of the post, as Posh slowly began to grow into the game after a nervy opening 10 minutes.

However, the visitors came closest to breaking the deadlock, as corner-kick found its way to their number 11 inside the box, who took one touch before smashing a volley against the post. Moments later, Holwell Sports number 9 was set through on-goal, but her shot fell straight into the arms of Katie Cooper.

The visitors opened the scoring on 38 minutes as their number 9 managed to break free one-on-one, and this time made no mistake, slotting the ball under Cooper that gave Holwell Sports the lead just before the break.

In the closing stages of the first half, Posh found themselves down to 10 players after Niamh Connor was forced to come off and was later replaced by Piper O’Neill at the break, with McConville slotting into the centre-back alongside Kerryn Copeland.

The Holwell Sports number 9 was a constant threat for Chloe Brown’s side in the first half, and it seemed nothing had changed after half-time, as she burst through on-goal, but Cooper produced a fantastic low-save to prevent her second of the evening.

A quick free-kick set Driscoll on her way as she burst into the opposition box, with her first attempt blocked by the defender's leg before the second effort dribbled into the arms of the keeper.

Borque, who replaced Driscoll on 72 minutes, made an instant impact on the right-hand side, beating one defender before laying it back to Keir Perkins and her shot seemed to be heading into the top corner, but the keeper was quickly across to gather the ball in mid-air.

With the full-time whistle fast approaching, Posh continued to pile the pressure in search of an equaliser, as Steward saw a long-range effort drift quite wide of the post. Then, Sunday’s hat-trick hero had a glorious chance on 85 minutes, turning her defender inside the box, with the ball bouncing over both of their heads, but on the half-volley, she struck the outside netting as Posh fell to their first defeat of the season.