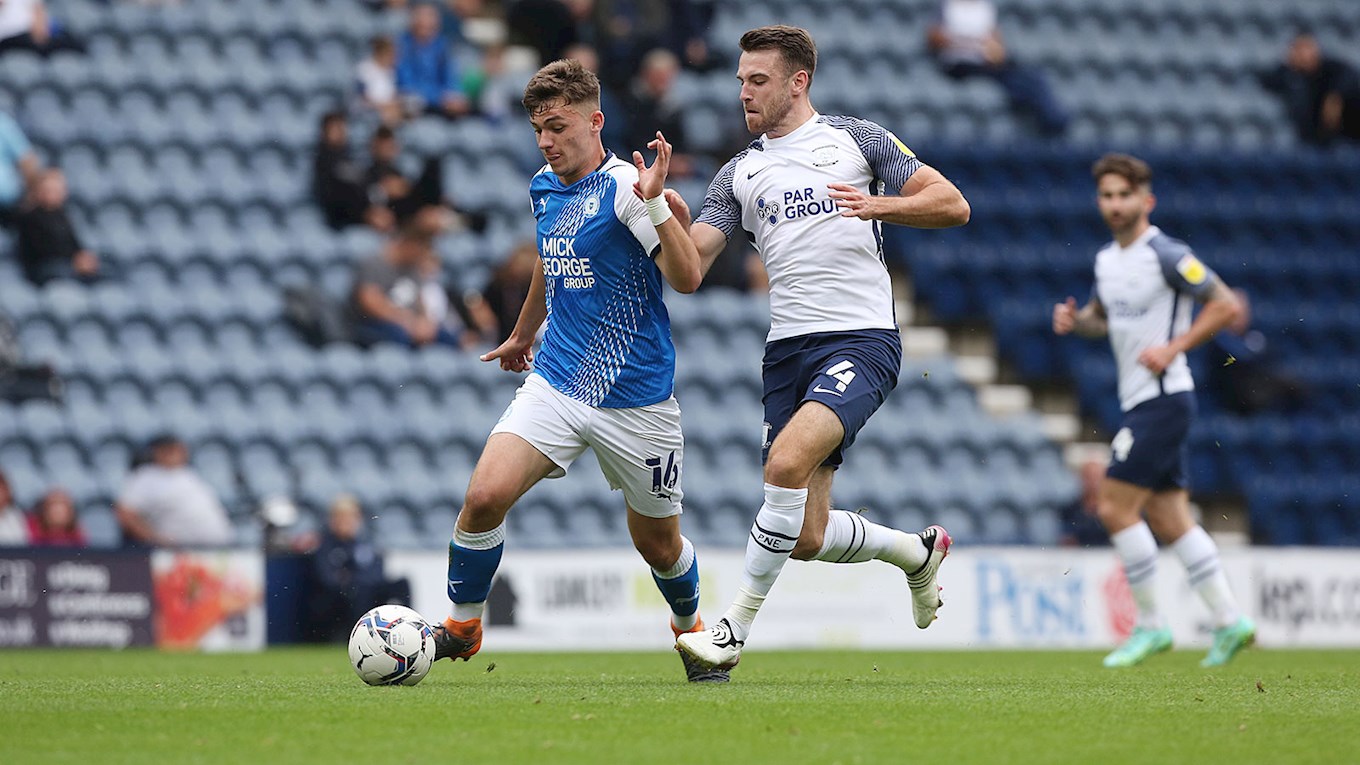 A first half header from Patrick Bauer condemns Posh to defeat.

Peterborough United slipped to a 1-0 defeat at Deepdale against Preston North End as a first half header from Patrick Bauer earned the hosts all three points from an entertaining encounter with Darren Ferguson’s men’s second half performance catching the eye without yielding any points.

Josh Knight, deployed as one of three centre backs, made a brave block to deny Ben Whiteman from range on nine minutes as the hosts made an assured start. The hosts found the breakthrough on 14 minutes as a free-kick from Ledson was met by a bullet header from BAUER and despite the best efforts of Pym, it found the back of the net.

Daniel Johnson fired over when off balance on 31 minutes after a pass from Knight was intercepted by the midfield man. Whiteman struck the crossbar from the edge of the box with a controlled volley moments later as the hosts enjoyed a strong spell.

Sinclair was through on goal on 34 minutes, but Pym kept out his effort with his legs. Kent sliced a shot wide at the other end after good work in a tight area from Dembele. There were two minutes added on, but Posh saw out those 120 seconds without any issues.

Dembele saw a shot cleared off the line by Van Den Berg after incredible close control in the box on 50 minutes before Burrows and Butler both saw efforts blocked by courageous defenders.  Grant then curled a free-kick from 25-yards over the top after Dembele was upended on the edge of the box.

Pym was well placed to keep out a curling shot from Johnson from 25-yards on 55 minutes after Posh were dispossessed in a dangerous area. Pym was called upon to deny Sinclair with his legs moments later before Whiteman fired wide from distance.

Darren Ferguson made a double change on 65 minutes with Jack Marriott and Sammie Szmodics introduced for Dembele and Burrows. Pym did well to tip over a close-range header from Bauer as Preston caused plenty of problems from corner kicks.

Kent glanced a Grant free-kick over the top on 75 minutes after Marriott did well to win a free-kick by the touch-line. Substitute Riis was causing plenty of problems, he wriggled into the box but again was kept out by the legs of goalkeeper Pym.

Marriott dragged a shot wide from just inside the box after linking superbly with Clarke-Harris on 78 minutes as Joel Randall was introduced as the final Posh change, Josh Knight withdrawn in an attacking move.

In stoppage time, Johnson cut inside and fired wide of the near post as the hosts came close to a second goal while in the final seconds, Clarke-Harris couldn't stretch enough to divert a cross past the keeper.