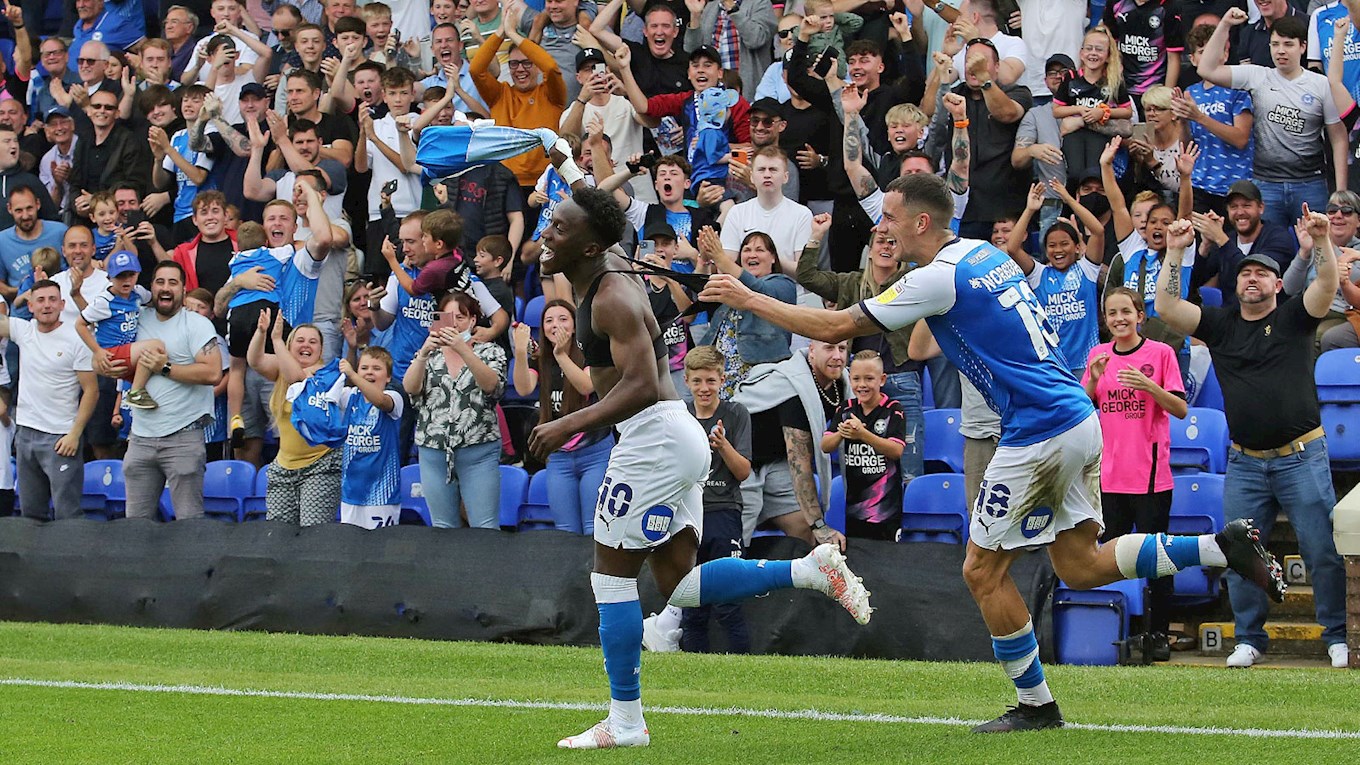 Posh up and running after scoring twice in injury time to overcome Wayne Rooney’s Derby County.

Live on Sky, the first home league game back in the Championship, raucous crowd – you just knew that Peterborough United would add to the drama and Darren Ferguson’s men did just that, scoring twice in stoppage time to secure a fine 2-1 victory over Derby County at the Weston Homes Stadium.

It was a lively start with both sides playing at a high tempo, backed by noisy supporters, but chances were at a premium inside the opening 15 minutes. Jack Marriott, playing against his former club, had a half chance on 18 minutes after good work from Joel Randall, but he took a heavy first touch.

Jonson Clarke-Harris nodded a deep Dan Butler cross over the bar on 21 minutes as Posh made progress down the left hand channel. Skipper Mark Beevers was rather harshly cautioned on 25 minutes for a foul by the touch-line as referee Mr Webb punished the Posh man for his first indiscretion.

Derby goalkeeper Kelle Roos somehow kept out a powerful drive from Clarke-Harris from fully 30-yards on 33 minutes, the shot-stopper managing to prevent it from squirming through his legs. There was one minute of added time indicated, but nothing occurred during those 60 seconds.

Roos was called upon moments after the interval to keep out a low drive from Jorge Grant after neat interplay between Clarke-Harris and Marriott. The Rams were forced into a change on 51 minutes as Jack Stretton replaced the stricken Colin Kazim-Richards.

Posh made a change on 62 minutes with Siriki Dembele replacing Marriott in attack. Thompson was cautioned moments later as Derby broke at pace. Darren Ferguson made his second change on 73 minutes with Josh Knight replacing Randall.

The visitors opened the scoring on 77 minutes as a corner was headed back across goal, the ball eventually falling kindly for the substitute STRETTON who lashed home giving Pym absolutely no chance. Harrison Burrows replaced Beevers for the final 10 minutes as Ferguson tried to find an equaliser from his side.

Posh drew themselves level in stoppage time as a low cross from Ward was tapped home at the back post by Harrison BURROWS. Clarke-Harris fired over with a free-kick deep into 11 minutes of stoppage time.

Burrows provided a chance for Grant in the box moments later, but he couldn’t keep his header down.  Incredibly, in the 100th minute, Posh found a winner as another Ward delivery fell at the feet of DEMBELE, who swerved and fired low into the bottom corner.