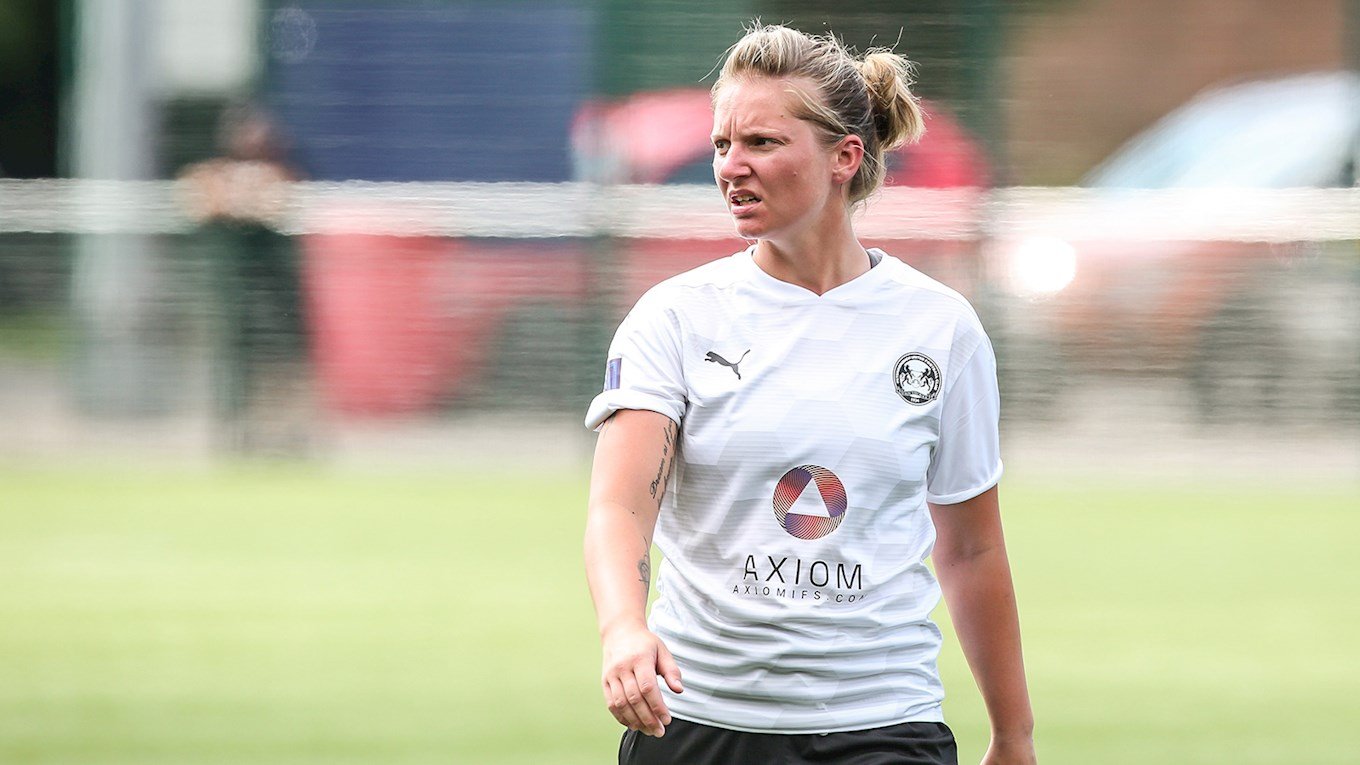 Posh Women pick up a point following a 2-2 draw at Burton Albion Women.

Jess Driscoll rescued a late point for Peterborough United Women’s as they drew 2-2 with Burton Albion Women’s at Rocester after a resilient performance from a much-changed starting eleven for Chloe Brown’s side.

Posh were forced into a make-shift defence after injuries picked up in previous matches, as midfielder Stacey McConville and debutant Elloise Copson started centrally with Emma Stevenson and Megan Breakwell at full-backs. McConville produced some brilliant last-minute challenges as Burton Albion threatenED with a couple of through balls early on.

Cassie Steward long-ball found Perkins through the middle, who outpaced the defenders, and tried to lob the keeper but doesn’t get enough height on the ball, falling into the arms of the keeper. Moments later, Posh rattled the woodwork as a loose ball inside the box was collected by Beatriz Borque and her scuffed effort hit the post before being cleared by the defenders.

Perkins broke free on the left-hand side, cutting onto her right foot, but the shot was straight into the arms of the keeper. She then saw an effort sail over the bar from the edge of the box after some brilliant hold-up play by the captain.

Then, at the half an hour mark, Posh broke the deadlock as Stacey McConville’s deep free-kick was flicked home by one of Burton Albion defenders into the back of the net, giving Chloe Brown’s side a deserved lead.

However, it was short-lived, as the hosts were awarded a penalty after the referee judged Steward used her arm to block an incoming cross. Amber-Leigh Donny stepped up and calmly slotted into the bottom corner to draw the game level.

Borque broke free on the right-hand side and her cross found Perkins inside the box, but her touch was too heavy and allowed the keeper to smother the ball. Posh could have had the perfect start after the break after Driscoll skipped past one or two defenders, forcing her way into Albion's box before unleashing a shot at goal that smashed against the side netting.

Burton Albion pipped possession in midfield and sent the ball through to Curzon, who was one-on-one with Cooper and looked destined to score, but she dragged her shot wide of the post.

A little scramble inside the Burton Albion's box saw the ball fall to Ellen Marson, who produced a quick snapshot at goal, but, once again, it was straight down the throat of the goalkeeper. Brown then made a double change on the hour mark, as Piper O’Neill and Borque made way for Megan Parret and Laura Dodwell.

The recently subbed Dodwell had a brilliant chance to hand Posh the lead after Perkins turned her defender before sliding the ball through to the on-rushing Dodwell, who looked for the near-post but couldn’t direct it on target.

As the game entered the final 15 minutes, Posh began to pile the pressure on Burton Albion; starting with Steward, who sent a low-driven shot into the bottom corner, which the keeper got down well to push away for a corner.

However, the hosts had two great chances to take the lead.  A corner swung in missed the head of Drinkhall, eventually bounced off Millie Wortley and away to safety before a low-cross found Oxley inside the box, who had the whole goal to aim for, but she lost the ball under her feet and Cooper quickly smothered the loose possession.

Burton Albion, however, did eventually find the breakthrough as Millie Wortley spotted Cooper off her line and sent a 35-yard effort over Cooper’s head and into the back of the net with seven minutes remaining.

That didn’t dampen Posh spirits as they quickly looked for an equaliser, and in the 86th minute, they were deservedly rewarded. Another deep free-kick from McConville was flicked on by one of Albion’s defenders, landing to feet of Driscoll to easily tap home from close-range, ensuring Posh earned a well-deserved point at Rocester FC.