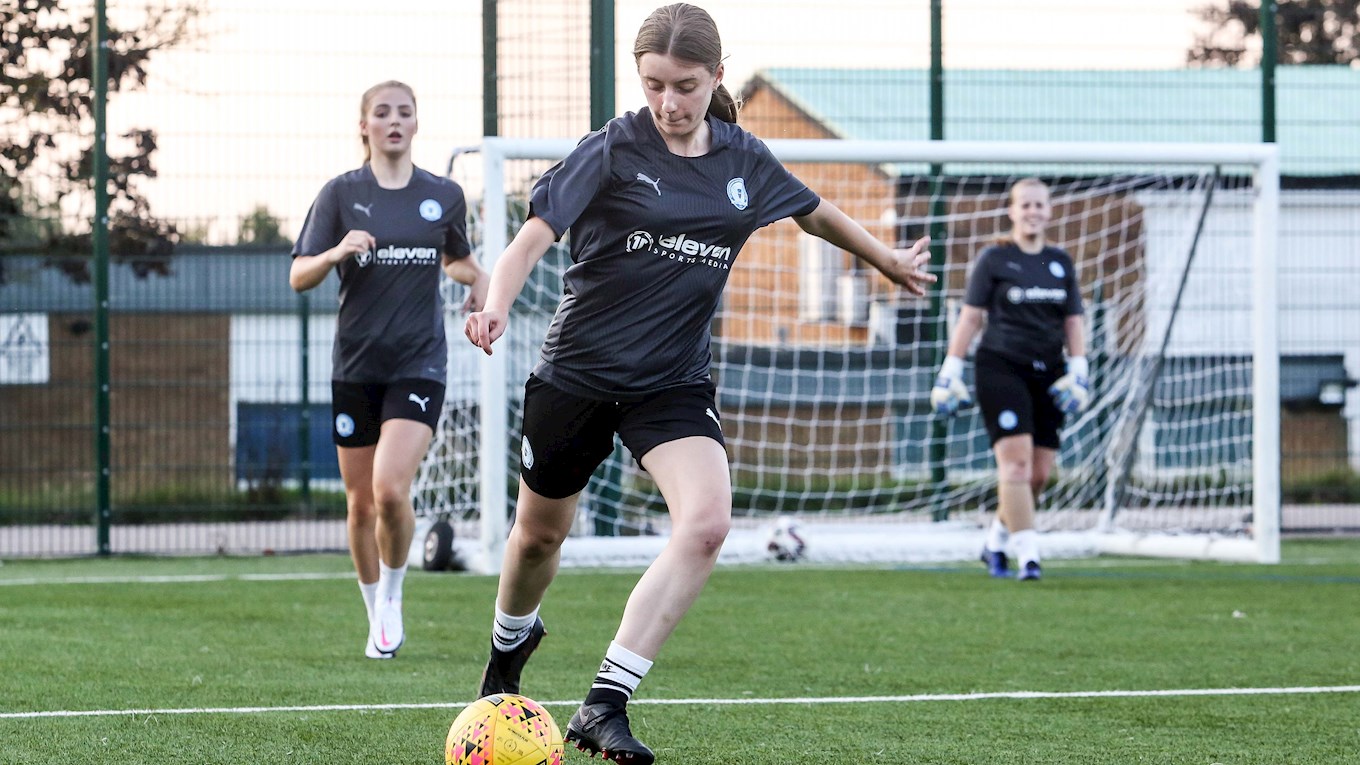 Megan Breakwell bagged a brace as Ladies end pre-season with an 7-0 victory at St Ives.

Peterborough United Women’s ended their pre-season programme with an 7-0 win over St Ives on Wednesday evening with Megan Breakwell and trialist C bagging a brace alongside Ellen Marson, Keir Perkins and a long-range finish from Piper O’Neill.

The new signings of Jess Driscoll and Ellen Marson, who were announced earlier in the week, combined well on the right before the latter saw her effort easily collected by the keeper.

As the game reached the 20-minute stage, the St Ives keeper got down well to smother Driscoll header after Keir Perkins cross found the midfielder inside the box. Trialist A saw her effort sail over the ball as Posh were comfortably on top in the first half an hour.

St Ives had a couple of opportunities to break the deadlock against the run of play; starting with a long-range shot that sailed over Sophie Powell but wide of the post before a deflected effort from a corner caused a moment of panic before landing over the bar.

The deadlock was finally broken on 35 minutes after a combination from the trialist, as trialist A pass nutmegs the defender and into the path of trialist C, who directed her shot into the bottom corner and gave Posh a deserved lead.

A second goal for Chloe Brown side and trialist C quickly followed as burst through on-goal, beating the keeper at the near post. Moments before the break, new summer signing Megan Breakwell doubled Posh advantage in quick succession, as Hannah Pendred low cross found Breakwell at the back post to poke home.

The Ladies continued their momentum into the early stages of the second half, as Driscoll deflected effort forced the keeper to change direction before tipping the ball around the post. Hollie Lewis’ deep free-kick found the free head of Marson inside the box, but she could only direct her header into the arms of the keeper.

Captain Perkins was sent through on-goal on 61 minutes after a lovely backheel from Pendred, but the keeper was out quickly to smother the ball. Shortly after, Posh made it four on the evening, and it was trialist C who was involved again, laying it back to Marson and there was no mistake from the midfielder, slotting the ball low into the bottom corner.

Powell was called into action for the first time in the second half, saving the striker's effort with her feet that kept the clean sheet intact. As the game entered the final 10 minutes, managed would have imagined Posh to take their feet off the gas a little, but the Ladies side were eager to end pre-season strongly with another three goals.

Starting with Perkins, who took down Emma Stevenson cross before placing it beyond the keeper and into the back of the net. Then, it quickly became six, as Piper O’Neill played a beautiful long-ball to Breakwell to set her through on-goal and she smashed home for her second of the game.

O’Neill rounded off the goals with an outstanding long-range effort from the right-hand side, sailing over the keeper's head and into the top corner, ending a perfect night for the Ladies and builds crucial momentum for the start of the season on Sunday.

Chloe Brown: “A perfect way to end pre-season, players' attitudes were fantastic and really pushed hard to keep the tempo high until the final whistle. I thought we played some great football, shifting the ball into space well to get lots of opportunities on goal. The players looked like they really enjoyed tonight and wanted to get the result.”