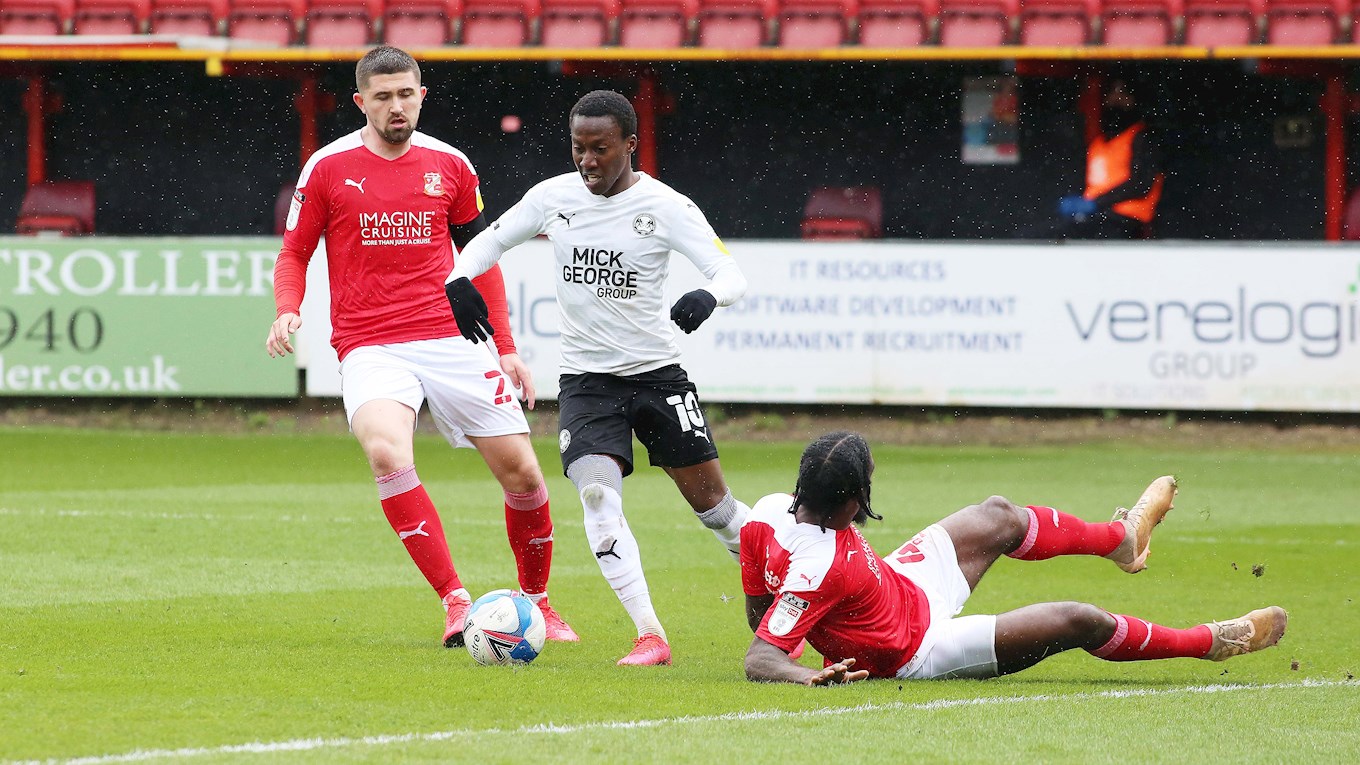 Posh secured an important victory at Swindon Town with Siriki Dembele bagging a first half brace.

In truth, it could have been nine or 10, but Peterborough United did manage three as Darren Ferguson’s men recorded a 3-0 victory at the County Ground against struggling Swindon Town with Siriki Dembele bagging a brace.

It was a quiet start to proceedings at the County Ground with the home side dominating possession, but it was Darren Ferguson’s men who found the breakthrough, Siriki DEMBELE showing tremendous persistence under pressure before linking with Eisa to race clear, round the keeper and fire into the back of the net.

Jack Payne fired over on 21 minutes, but the playmaker was off balance when he struck the shot from just inside the box. Posh doubled the lead on 23 minutes and it was a fine individual effort from DEMBELE, who drove into the box, cut inside the defender Grant and finished clinically past Camp for his 10th league goal of the campaign.

Dembele burst into the box again on 27 minutes, but instead of trying to clip the ball over the keeper he tried to pick out Eisa and it was intercepted. Clarke-Harris saw a downward header tipped over by the experienced Camp but the resulting set-piece came to nothing.

Twine was cautioned for a dive in the box on 36 minutes by referee Mr Smith as Brown and the striker tussled. Dembele picked out Taylor on 39 minutes after racing into the box again but the midfielder scuffed his left-foot shot.

Butler saw a left-foot shot from an acute angle pushed around the post by Camps on 43 minutes and in stoppage time, Clarke-Harris saw a swerving effort shovelled around the post by the keeper. Bursik did well to watch a bouncing effort from Twine from a set-piece two minutes after the break after Taylor was penalised for a foul.

John Sheridan made a change on 52 minutes with Brett Pitman introduced and moments later, his movement created the space for Twine to let fly from distance, keeper Bursik doing well to parry the ball to safety.

Posh had the chance to make it 3-0 on the hour mark as Clarke-Harris was upended in the box by Camp, but the striker rolled his penalty kick wide of the target with his left-foot. Ferguson mad a change on 67 minutes with Harrison Burrows replacing Eisa.

Ethan Hamilton replaced Brown in midfield on 74 minutes as Ferguson made his second change of the afternoon. Dembele had a chance for the hat-trick on 77 minutes after racing onto a Ward pass, but with Burrows in space, he went for goal and Camp kept it out. Ward had a chance himself to make it 3-0 from a Clarke-Harris pass but Camp kept him out.

Posh made a double change as we entered five minutes of added time with Ricky-Jade Jones and Idris Kanu on for Burrows and Dembele. Substitute Jones forced Camp into another stop in stoppage time from an acute angle.

Posh finally made it 3-0 in stoppage time, CLARKE-HARRIS linking with Jones and Kanu to curl a fine effort past Camp and into the back of the net for his 29th goal in all competitions.