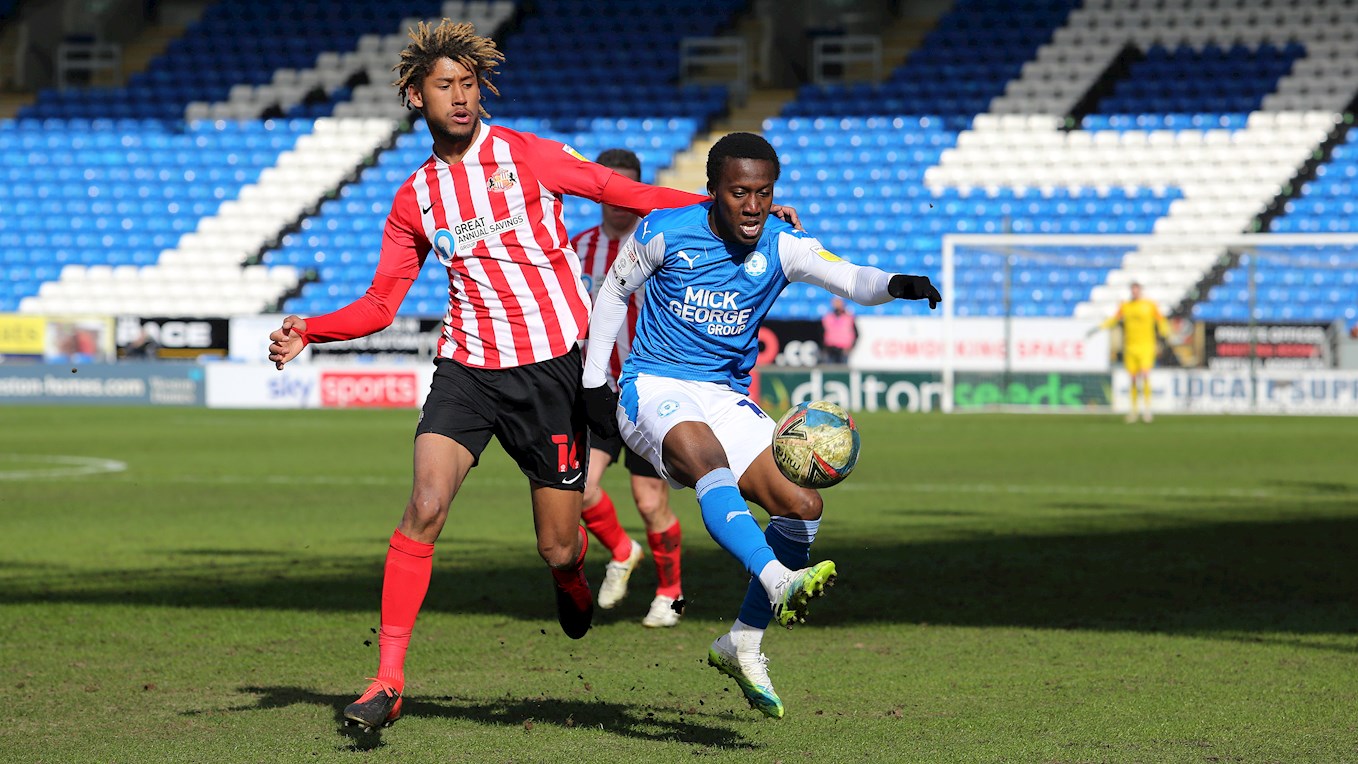 Match report for Peterborough United vs Sunderland on 05 Apr 21

Siriki Dembele strike cancelled out by Aidan McGeady free-kick as Posh and Sunderland draw 1-1 at the Weston Homes Stadium.

Peterborough United were forced to settle for a point against Sunderland after Aidan McGeady’s late free-kick cancelled out Siriki Dembele’s opener in an entertaining Sky Bet League One fixture at the Weston Homes Stadium.

Ross Stewart sent a deflected volley wide of the target from 25-yards after linking well with strike partner Charlie Wyke on 10 minutes after a fairly quiet start to the contest in difficult blustery conditions.

Louis Reed was cautioned by the official on 16 minutes for a foul much to the frustration of team-mate Jack Taylor who looked like he was upended moments earlier. Reed tested Burge with a snap-shot from 30-yards on 27 minutes that the keeper did well to hold as Posh registered the first effort on goal in the contest.

Butler was cautioned for a foul on 37 minutes by referee Mr Hicks. A delightful cross from Burrows nearly produced an own goal from O’Nien on 41 minutes, keeper Burge doing well to keep it out at full stretch.

Posh had a decent chance to open the scoring on 47 minutes as a Ward cross was only half cleared to Szmodics, but he couldn’t keep his volley down. At the other end, Pym did well to tip a fierce drive from Wyke over the crossbar.

Aidan McGeady curled a free-kick into the side-netting on 52 minutes after Kent was penalised for a foul on Stewart. Darren Ferguson made a double change just before the hour mark with Siriki Dembele and Reece Brown replacing Burrows and Reed.

Substitute Brown curled an effort over the top after a strong run from Ward down the right hand side as Posh pressed forward. Szmodics dinked a chance wide of the target after Ward squeezed the ball through to him on the angle on 63 minutes.

Posh opened the scoring on 66 minutes as Thompson squeezed a pass through to substitute DEMBELE and he fired a left foot shot across the keeper and into the back of the net. The visitors’ boss Lee Johnson responded with a quadruple substitution.

Taylor lashed a shot over the crossbar from distance on 71 minutes after a neat back heel from Ward. Burge produced a big stop on 75 minutes to deny Szmodics after the former Bristol City man had beat the offside trap.

The visitors levelled the scores on 80 minutes as MCGEADY curled home a free kick from 25-yards after Taylor had committed a foul. Sunderland hit the post a minute from time as a clearance struck Kent and clipped the outside of the woodwork.