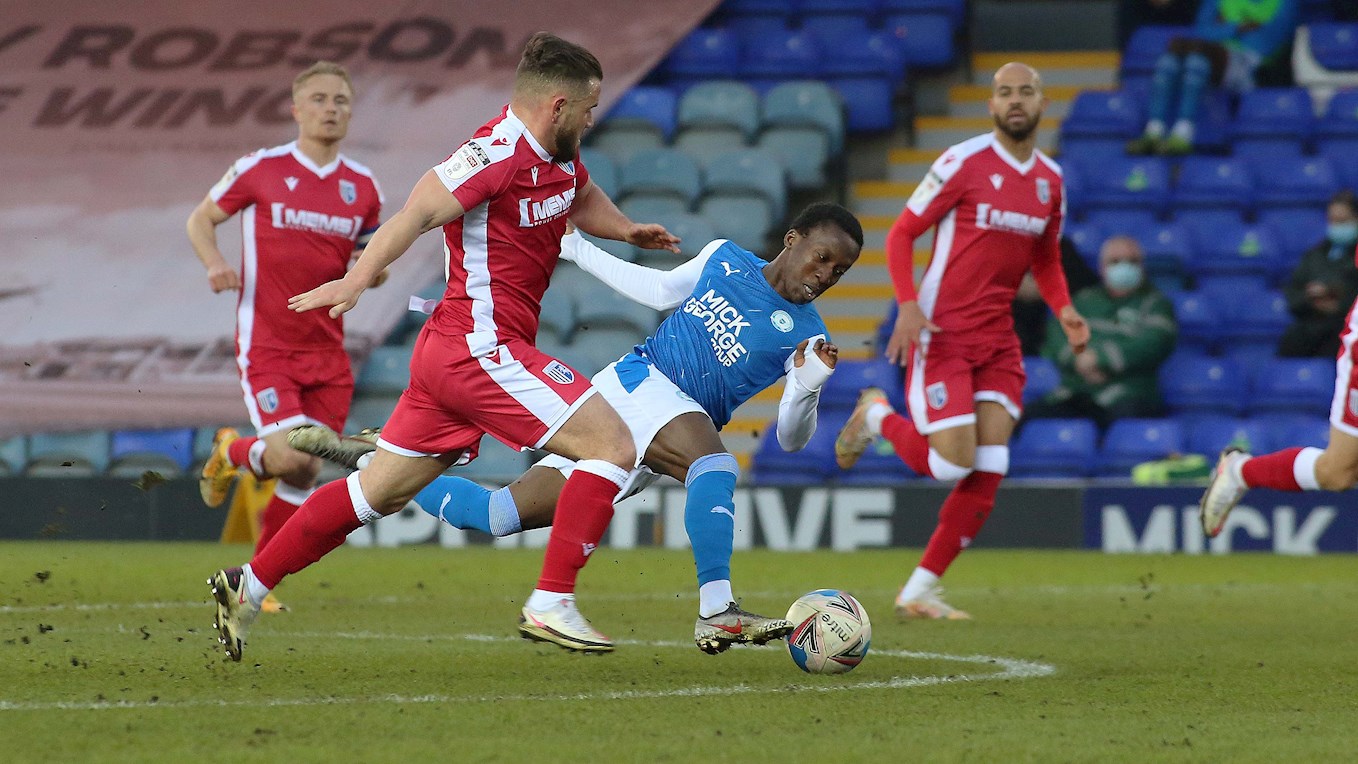 Match report for Peterborough United vs Gillingham on 20 Apr 21

First half goal the difference as Posh beaten 1-0 by Gillingham.

Peterborough United suffered a 1-0 home defeat by Gillingham at the Weston Homes Stadium as a first half strike from Connor Ogilvie secured Steve Evans’ men all three points on a feisty night, which saw Posh have 19 efforts at goal, but alas, only two were on target as the visitors condemned Darren Ferguson’s men to a rare home reversal.

The visitors made a boisterous start to the contest, getting the ball forward quickly into John Akinde and winning the second balls. On 10 minutes, Jordan Graham curled a free-kick over the crossbar from 25-yards after Frankie Kent was penalised for a high foot.

The visitors opened the scoring on the quarter hour mark as a long throw was kept alive by Akinde and defender OGILVIE rifled home into the bottom corner with his right-foot. Thompson was cautioned for a foul moments later as frustrations in the Posh camp grew.

Posh felt they should have had a spot-kick on 20 minutes as Clarke-Harris appeared to be felled in the box, but the referee waved away the protests and then cautioned Szmodics for a foul as the Gills broke on the counter-attack.

MacDonald was cautioned for a foul on Szmodics on 22 minutes as the lively encounter continued. Ward curled a free-kick wide of the target from 30-yards after the referee felt the need to try and calm the managers down after a lively exchange even though the Posh boss had only been on the touch-line for a matter of seconds.

Four minutes of added time was indicated to account for Gillingham time-wasting with Kent lashing a shot from long-range well wide. Dembele fired over deep into stoppage time after an intelligent flick from Ward.

Dembele was cautioned for reacting to a Gillingham player on 50 minutes after frustrations again boiled over. Szmodics was a whisker away from levelling the scores on 52 minutes as he connected superbly on the volley after an Akinde clearance, the effort cracking against the underside of the crossbar before being cleared.

Taylor headed a deep Ward corner kick wide of the target on 56 minutes after Ward’s initial free-kick was clawed behind by Bonham. Clarke-Harris fired over with his right-foot from a low Ward centre on 67 minutes after a patient Posh move down the right.

Darren Ferguson made a change moments later with Ethan Hamilton replacing Brown in midfield. The golden chance fell to the feet of Hamilton deep into stoppage time, but he lashed his left-foot shot from eight yards wide of the target.

Bursik denied Samuel deeper into stoppage time before the referee brought an end to the contest.