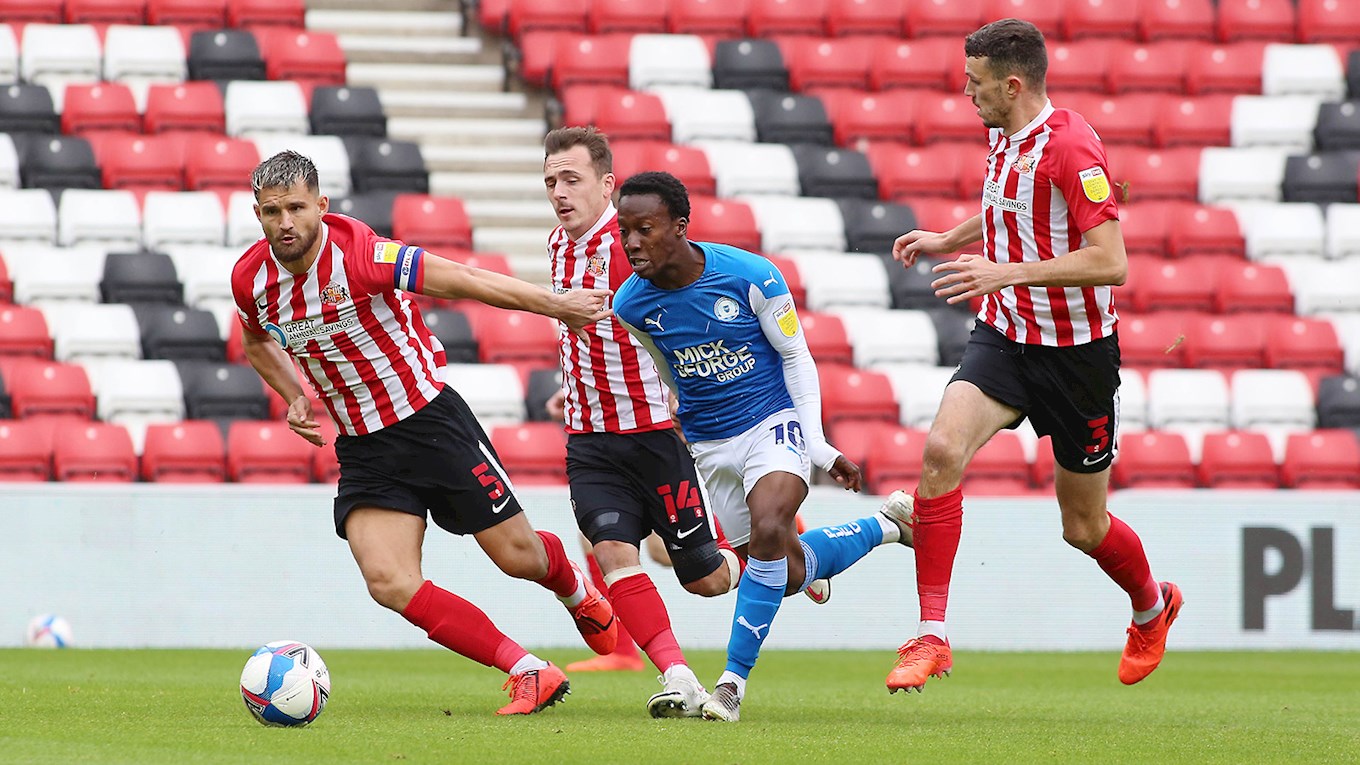 Match report for Sunderland vs Peterborough United on 26 Sep 20

A controversial penalty award costs Posh as Sunderland win 1-0 at the Stadium of Light.

Peterborough United manager Darren Ferguson was left hugely frustrated as his side were beaten 1-0 by Sunderland with referee Scott Oldham the man taking centre stage as he gave a penalty against Jack Taylor when, if anything, it should have been a foul the other way.

Posh made a very good start at the Stadium of Light with Siriki Dembele causing all kinds of issues with direct running. It was Dembele who tested Burge from long-range on three minutes, the keeper parried the effort into the path of Jonson Clarke-Harris, but he dragged his shot wide of the target.

Clarke-Harris was then denied by Burge following a well-struck free-kick before O’Nien at the other end fired low towards goal only for Butler to clear after a little bit of a scramble. Sammie Szmodics was next to try his luck, but he couldn’t guide the ball past Burge after a whipped cross from the marauding Butler down the left.

Posh carved out another opportunity, this time on the break, on 21 minutes as Dembele and Szmodics linked up to create a shooting chance for Clarke-Harris on his left-foot but he fired low straight at Burge.

The hosts were forced into a change on 37 minutes with Aiden O’Brien replacing the injured Chris Maguire. Moments after the re-start, Hume flashed a shot wide of the near post after a low cross eluded on-rushing Sunderland players in the box.

The hosts were dominating the proceedings in this second half with substitute O’Brien denied by the legs of Pym. The Black Cats forced a succession of free-kicks with Clarke-Harris doing well in defensive situations.

Jack Taylor tested the reflexes of Burge at his near post after a good burst from midfield before O’Brien was cautioned by Scott Oldham for delaying the taking of a Posh free-kick. Both sides made a change on 70 minutes with Joe Ward replacing Broom for Posh and Danny Graham replacing Wyke for Phil Parkinson’s men.

Posh were a whisker away from taking the lead as midfielder Louis Reed cracked an unstoppable free-kick at goal but with Burge beaten, the ball smacked against the crossbar and rebounded back into play.

The home side got their noses in front from a hotly disputed spot-kick, Taylor judged to have felled Hume inside the box by referee Mr Oldham. It looked outside, the Posh players felt it was outside if there was a foul at all, but LEADBITTER was allowed to step up and lash home the penalty.

Deep into stoppage time, Reed fired inches past the post with the aid of a deflection and Thompson glanced the resulting set-piece wide. Posh pushed for a deserved leveller, but one was not forthcoming.