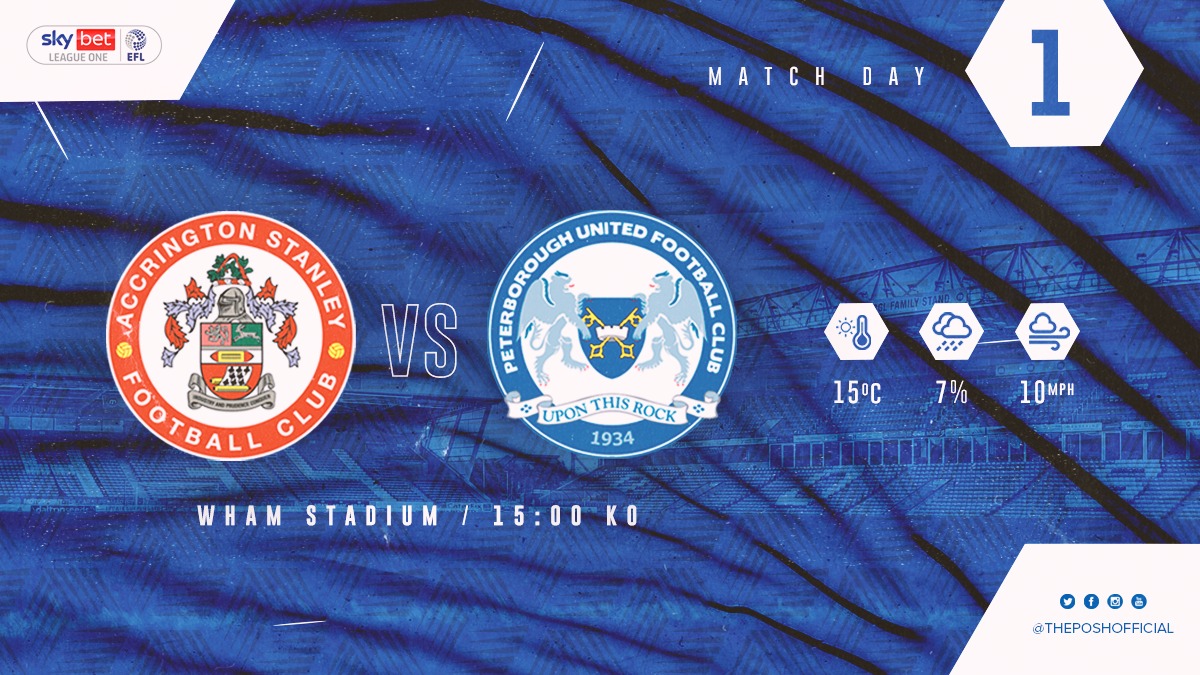 The new Sky Bet League One campaign gets underway on Saturday as Peterborough United make the trip north to face Accrington Stanley (3pm) as Darren Ferguson’s men look to build on the performance in the EFL Trophy on Tuesday night, when the young XI secured a penalty shoot-out success against Burton Albion.

Accrington will be full of confidence after a thumping win against Leeds under 21s in mid-week in the EFL Trophy, but their manager John Coleman has already played down the significance of that victory.

Posh are without the services of teenage front man Ricky-Jade Jones due to a muscle injury, but the highly rated forward should be back in full training on Monday ahead of the first home game of the season in the league against Fleetwood Town.

Frazer Blake-Tracy is another that won’t be involved. He has a slight strain and will be stepping up his recovery at the start of the week. Sammie Szmodics, who completed a permanent move from Bristol City earlier in the week, could feature after a solid few days of training.

Accrington are set to be without striker Colby Bishop and Joe Pritchard, although both have returned to training after injury lay-offs. Stanley have made some shrewd loan signings, with the most involved in that win against Leeds in midweek.

“Accrington is a tough start for us. I always think any side getting a positive result away at Accrington have done well, so we know that we have to be on it on Saturday to get the right result. I watched them against Burton last Friday in person and we have watched a lot of their clips from the pre-season games.

“They have recruited well and I think that John has done a wonderful job at the club for many years now. We have one or two decisions that we have to make regarding the starting line-up, but the squad is settled and we are looking forward to getting the league season underway,” Darren Ferguson said.

“They are one of the favourites but that goes out of the window when it's 11 versus 11, they've spent a lot of money in the summer, their marquee signings being Jonson Clarke-Harris and Sammie Szmodics.

"On a Saturday when it's three o'clock, it's 11 versus 11 and it's the ones who apply themselves better and hopefully we can apply ourselves well on Saturday,” Accrington boss John Coleman told the press this week.

Tariq Uwakwe was one of a number of loan signings that made the move to Accrington in the close season and he bagged a hat-trick on his debut from wing back, timing his runs into the box cleverly and not being afraid to pin the opposing full back in his own defensive third.

John Coleman said: “Obviously you want to score goals, whether you're in training or playing games. Tariq's a confidence player but he's certainly impressed me in the short time I've seen him play.”

The game is behind closed doors so the only way to watch the action is by purchasing a match pass for iFollow. Match passes are available for £10 and can be purchased at https://www.theposh.com/ifollow/subscribe/#MatchPassAvailability