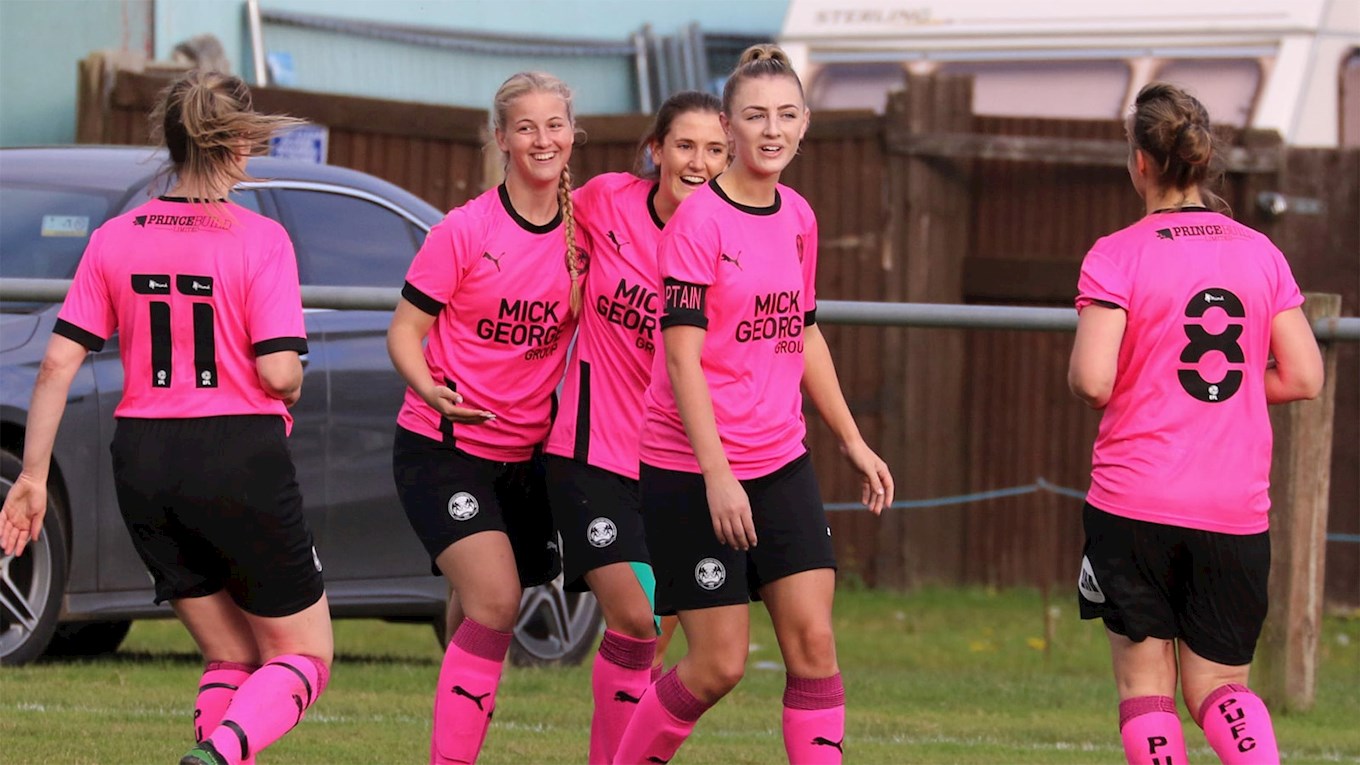 The Posh Ladies bounced back from last weekend’s home reverse with a comfortable victory away from home.

After last week’s disappointing result and performance, the Ladies arrived at Calverton Miners Welfare in determined mood. A delay of almost an hour due to the lack of a referee was eventually resolved and after the second warm up of the afternoon the match was underway.

From the first whistle it was clear this was going to be a much-improved performance and so it proved. Strike partners Donna McGuigan and Keir Perkins both had chances through on goal but were unable to get past the Rise Park goalkeeper. After multiple chances, a goal finally arrived for Posh on 21 minutes when Molly Orr-Love escaped down the right wing and sent in a deep cross that was met under challenge by the brave head of Stacey MCCONVILLE for the opener.

Posh continued to press and on 30 minutes an interchange of passes between McConville, Perkins and Hannah Pendred allowed PENDRED to steer the ball home for Posh’s second.

Posh were coping well with sporadic attacks from Rise Park and MCGUIGAN scored Posh’s third on 55 minutes latching on to a through ball from Holly Lewis.

On the hour mark the goal of the game came when ORR-LOVE received the ball to the right hand side of the Rise Park box and let fly with a rocket the keeper could get nowhere near to keeping out.

Completely against the run of play Rise Park clawed a goal back on 69 minutes but Posh continued to pile forward and on 83 minutes substitute Piper O’NEILL was fed the ball by McConville and she hammered home with her first touch of the game.

On 90 minutes Posh made it 6-1 and the provider once again was McConville who set Megan PARRETT away whose shot was too strong for the Rise Park keeper to keep out.

An excellent performance today by the Ladies with strong dominant performance all over the pitch to put smiles on the faces of the Posh management team.

Posh next entertain Rotherham United on Sunday 18th October 2020 at the Mick George Training Academy which on paper looks like being a cracker between two teams that will likely be chasing honours at the end of the season.

Player of the Match – Megan Parrett

The Ladies Reserves made it two League wins out of two with a comfortable 5-0 win against Bugbrooke St Michael Ladies. Aliyah Palmer continued her fine form with a clinical finish in the 24th minute to make it 1-0. Thereafter the Ladies continued to create a number of chances, but resolute defending from Bugbrooke and some excellent saves from their goalkeeper kept the Ladies with only a single goal lead at half time.

The second half saw Bugbrooke come out strongly but on the 49th minute it was Callie Tancred who skipped past her marker and powered a left foot shot high into the goal to make it 2-0. The Ladies continued to push forward at every opportunity and when the ball was kicked out of the 18-yard box it was Amy Ratcliffe in the 71 st minute who fired past the Bugbrooke goalie to make it 3-0.

In the 85th  minute Zoe Devonport made it 4-0 with a coolly taken penalty after being brought down a few minutes earlier. There was still time for debutant, Sasha Tristram in the 89th minute to make it 5-0 with a right footed drive that gave the opposition goalie no chance of saving. This was a comprehensive win against strong opposition from a Reserve’s team that are improving game by game.